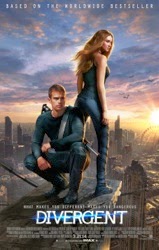 I don’t want to watch Shailene Woodley shoot people. With that in mind, Divergent is entertaining enough for the first 90 minutes and then it devolves into 50 minutes of what was coined on the podcast recently as "fucking murder."

I am a big fan of much of the cast of Divergent, which is why I saw the movie. It succeeds where it does because the cast is strong. I’m at the point where I’ll watch Shailene Woodley in anything because she elevates crap like Divergent with her screen presence and likeability. Seriously, I love this actress; she has great range, is adorable and I want to braid her hair.

The movie also has small roles for my boys Miles Teller and Ansel Elgort, although it’s weird seeing Teller and Woodley (who played a totes cute couple OMG in The Spectacular Now) go up against one another in hand-to-hand combat. Seriously, this movie is weird. Women get beat up. A lot. This worries me because the girl-power action movie, made popular by The Hunger Games, is now teaching young women that getting their ass kicked by men is part of their journey? I don’t know a ton about feminism but I’m pretty sure that’s not one of its tenets. Oh yeah, and just because you’re a girl that doesn’t mean you can’t shoot a ton of people too. Because you’re the chosen one so it’s all good???  Ugh, this movie is categorically irresponsible. 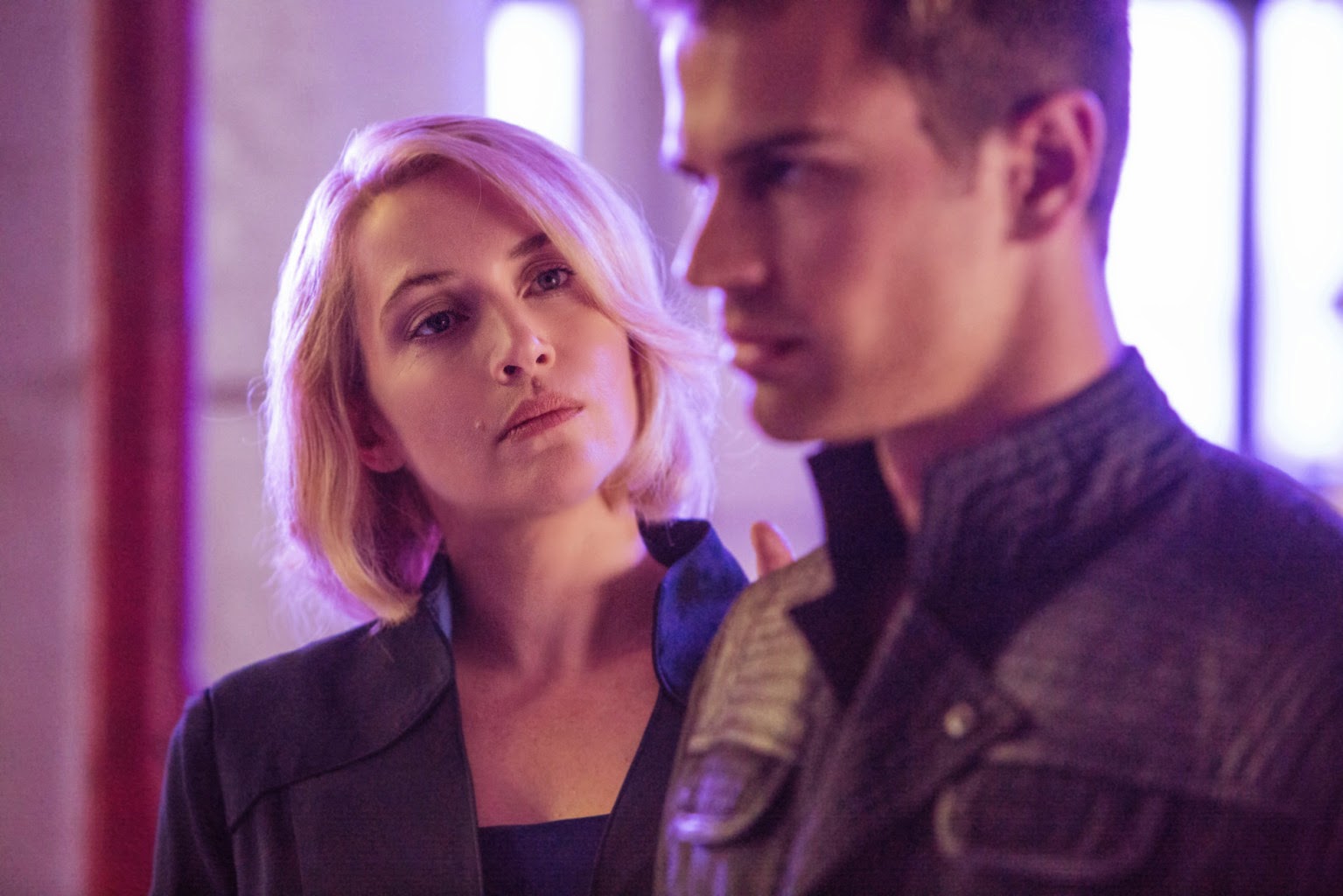 The plot in brief: Divergent is the first entry in a series of YA novels by Veronica Roth. The film adaptation directed by Neil Burger (of The Illusionist and Limitless – both fine, but one and dones) depicts a post-war decrepit Chicago where football doesn’t exist and no one drinks pop. Talk about science fiction! Instead, the survivors are broken out into five factions – of which I can’t remember the names so I’ll describe them: wussy liberals, hippies, assholes who tell the truth regardless of tact, step up 2the military and the hard-core tea party who don’t respect that the liberals are in charge of the government. If you don’t fit into one of the five, then you are fucking homeless which, based on my recent trip to San Francisco, is not what you want to be. So, like, find a faction, mate! Also, you really don’t want to be Divergent (i.e. not fitting into one of the factions because you have characteristics of several). If you are, you are basically too scary to live and everyone will want to kill you.

Our heroine, Tris (Woodley), tests out as Divergent, but with the help of Maggie Q (she’s on that WB show you don’t watch) is passed through as a liberal. You can choose which house (er, faction) you want to be in, though, so Tris decides to become a cirque de so’murderer because it appears to be all leather jackets, tattoos, climbing and jumping. Plus, all the young cute people are in this group -- it’s not a tough choice to make. Will her faction find out she’s Divergent, or will she be able to hide her secret?

That predicament provides the most interesting portion of the movie, which is the theme of hiding your identity in order to fit in with a clique. Tris has to adhere to all of the standards of her new faction but hide who she truly is – namely her compassion and intelligence. They want her to be a solider, which appeals to her daredevil and adventurer side, but is that enough? It provides an interesting parallel to the peer pressures of every teenager. This is all in the first 90 minutes. So are the most exciting action sequences. 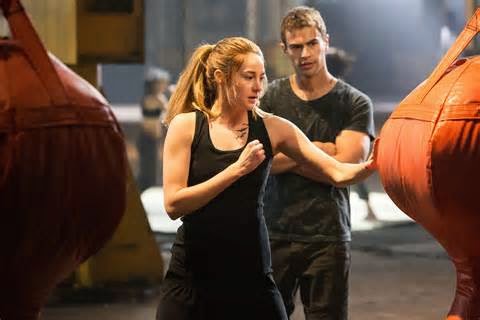 I dislike training sequences in movies because they are usually unrealistic and often all the same. The ones in Divergent are no different, but they are interesting and surprisingly exciting because director Neil Burger makes a neat choice of putting us in Tris’ shoes where the audience has no idea what to expect next. It keeps things brisk with lots of forward momentum – one moment, Tris is jumping off an elevated train onto a rooftop and then down 100 feet to be caught by a net, next she’s climbing up the Ferris wheel at Navy Pier and later hang-gliding across downtown Chicago. It’s all dumb but fun. But then the fun stops and the last hour left a bad taste in my mouth.

The climax of the movie (with the requisite cliff-hanger for the next chapter, of course) devolves into a bizarre shoot-out when the tea party takes over the military group with a brain serum and orders them to execute the liberals and sniff out the Divergents among the factions, namely the military group. Kate Winslet plays the head of the tea party, Ashley Judd and Tony Goldwyn play Tris’ parents who are part of the liberal agenda and Mekhi Pheiffer is the leader of the military group. These performances are all fine, although I could go another lifetime not seeing an Ashley Judd and Shailene Woodley shoot out. It’s just dumb-looking. I did not enjoy this part of the movie. Political allegory or not*, I don’t want to see the heroine of an action series have to kill people (albeit in self-defense, but by the hundreds it seems) to escape oppression.

I have to own up to being a hypocrite here, though. I don’t know if I would have had the same problem if the lead character of Divergent were male. Maybe the fact that it is a woman calls attention to what a troubling onslaught it is. In all honesty, it’s not that far off from the shootout near the end of The Matrix. I think I’m ok with The Matrix doing it because a) they are adults and not teens on the offensive; b) they are shooting virtual reality avatars and not real people (Divergent is even more mean-spirited because the military folks being shot are carrying out their evil orders via mind control) and c) The Matrix is an R-rated movie not targeted at teenagers. 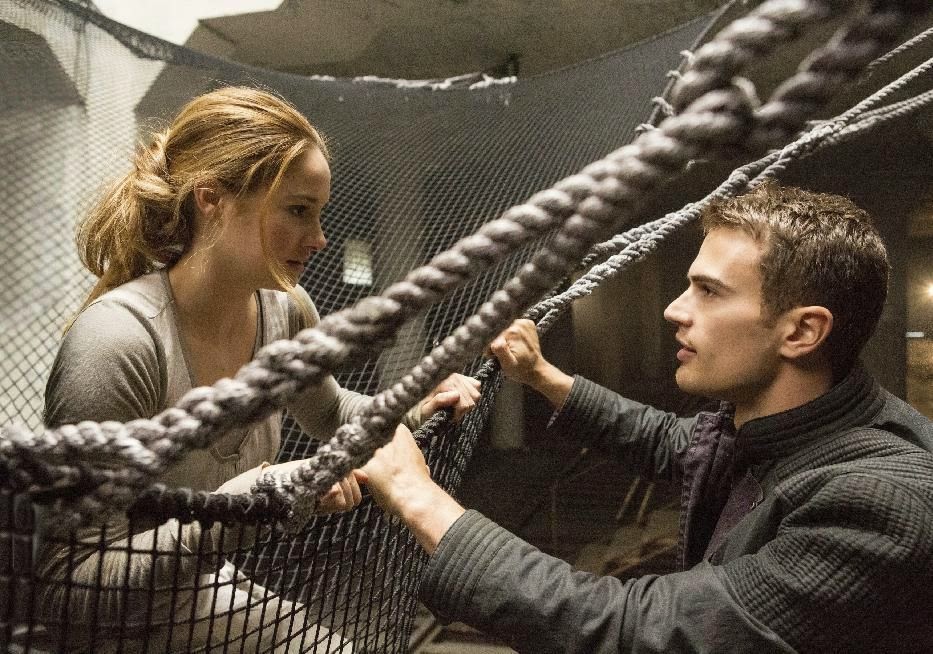 Being a knock-off of many other YA series including Twilight, Divergent also has the requisite love story between Tris and her team leader Four (Theo James, who resembles if Cary Elwes and James Franco had a baby). The two have an ok chemistry, but James is kind of a stiff from the Alex Pettyfer  school. Four is dreamy and, like, totally protects Tris from the mean Eric (played by Jai Courtney as a dickface because he has a dickface), who does not have a boner for Tris. He only has a boner for unhappiness.

Divergent is pretty much what I expected it to be. It feels extremely derivative of Harry Potter, The Hunger Games, Ender’s Game, etc. The script is garbage and the message is troubling but the cast works overtime to make it go down a little more smoothly. I wasn’t bored and, at times, was reasonably entertained. However, you’re probably fine skipping it. I think this series is not going to get better, only worse. If you do catch it, it’s not the end of the world.

*It’s somewhat impossible to ignore the anti-conservative message of the movie. Be warned if that type of thing bothers you. The movie also thinks the “smart” people are all evil, so there’s that too. And that the military is bad. In fact, the movie kind of only sides with you if you are a liberal who can kick some ass and has tattoos. So, I guess I’m the target audience and maybe not teenage girls? Food for thought. Speaking of which, I’m hungry but I suspect this airplane only has shitty food. And they’re showing Delivery Man. I’m going to ask the captain if I can ride on the wing.
Posted by Patrick Bromley at 7:43 AM