For the next few weeks, I would like to discuss movie musicals because I love them so. We have not talked about musicals much here at F This Movie!, so I see these next few columns as my humble attempt at remedy.

Get your tap shoes on, and spray your throat with that... throat spray stuff. We're going to dance, dance, DANCE and sing, sing, SING!

I have been teaching a unit on the Hollywood Musical in my film course for the past thirty years, and while I would be loathe to over-generalize about the experience, I can say one thing without fear of contradiction or correction: young people hate musicals.

Rather, they HATE musicals. A lot. It is a hot, hot, molten hate that will not subside and will not abate. 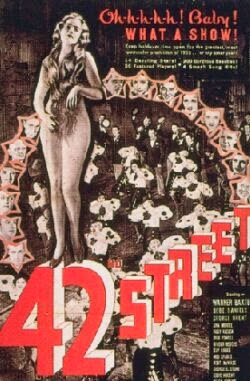 It took me a few semesters back in the 1980s to figure this out because I love musicals so much. Many of my students have but one purpose for going to movies and a single criterion by which to judge their relative merits. These kids go to movies to see a story; they want to know "how it ends." Their sole criterion is "realism" — that is, how "realistic" it seemed. It's a strange goal, given that film is an art form that generally hides its own artifice with a gloss of professional competence that we've merely named "realism." Like all art, movies are a gigantic lie, an artifice manufactured to reveal a larger truth. Some of my students simply cannot see past the artifice. They want to go to the movies, quickly suspend their disbelief, and spend the remaining 90 minutes pretending that they are watching reality, though it is surely a more entertaining reality than the rather drab reality they are actually experiencing outside the theater.

Musicals hold up a serious middle finger to these notions of "story" and "realism." They are largely unconcerned with plot. Musicals make no secret of the fact that plot is mere contrivance, a laundry line on which to hang musical numbers. Also, if viewers are simply at the movies to enjoy the narrative, then musicals must be a frustrating experience because during the average musical, the narrative stops dead every ten minutes so that people might sing and dance.

Glorious if you like that sort of thing! Frustrating if you don't.

The most brilliant essay on the Hollywood Musical I have come across is "Entertainment and Utopia" by Richard Dyer. I have been assigning it in class for decades; many college professors consider it essential reading as well. You can find badly Xeroxed pdf's of the essay both here and here.

Read it. You will be glad you did.

Dyer posits that Hollywood musicals are not trying to show us reality; these films have zero interest in trying to depict the world as it is. Instead, Hollywood musicals try to portray a perfect world, a utopia. Their musical numbers provide us a chance to glimpse Paradise—a world free of apathy and half-heatedness, isolation and loneliness, dishonesty and deceit, scarcity and want, or earthly bounds and physical limitation.

Dyer suggests that the musical numbers themselves (those little slices of heaven) will be examples of those qualities one would expect to find in a utopia. He has identified five categories, and every musical number in every movie musical ever made fits into one of these categories (occasionally, there are grey areas and a number will fit into more than one.) The categories are: Energy, Abundance, Community, Intensity, and Transparency. Here is how it works.

"Energy" numbers delight in showing us the human body in motion; we see strength, agility, and grace. Many of these numbers revel in showing us characters dancing simply for the sheer love of dancing. "Make 'Em Laugh" from Singing in the Rain is probably the best example of this category.

"Abundance" numbers celebrate a rich physical reality free from poverty or need. If the character is singing about something real (food, a train, a building) chances are that this is the category. "Greased Lightning" from Grease is a prototypical example of this because the boys onscreen are celebrating both their car ("with new pistons, plugs, and shocks") and what their car will get them ("I can get off my rocks.")

"Community" numbers demonstrate rich relationships between characters, whether they are neighbors, friends, family, or lovers. The barn-raising scene in Seven Brides for Seven Brothers is a terrific example of this, as is "You Can Count on Me" from the Gene Kelly and Frank Sinatra vehicle On The Town.

"Intensity" numbers emphasize outsized emotions and the freedom from non-commitment. Every emotion revealed in the number is felt completely, totally, and IN ALL CAPITAL LETTERS. "Pinball Wizard" from Tommy is a great example of this category, as the number itself shows us both the intensity of competition and the intensity of the singer's anger towards the title character.

"Transparency" numbers reflect honesty—a freedom from easy irony where all people simply speak the truth. For the purposes of our argument here, we are going to define this category very narrowly, as a slow love song. These are the numbers that my students cannot stand; they stop the movie cold. I can remember seeing Grease the summer it was released and witnessing a stampede up the aisles as people went to buy more popcorn or take a leak while Olivia Newton John sang "Hopelessly Devoted to You." Modern audiences have no patience for honesty or love.

We can use Dyer's categories to play a fun game OR ruin all movie musicals for ourselves forever. I have had students share with me at the end of the semester that thanks to this system (and other genre conventions and categorization systems I share with them in class) I have "ruined" movies for them forever. They tell me that they used to go to the movies for a cheap good time, but now they can't help but THINK during the movie, and that ruins the movie. Ouch.

So much for the documentary short — now on to this week's feature film! 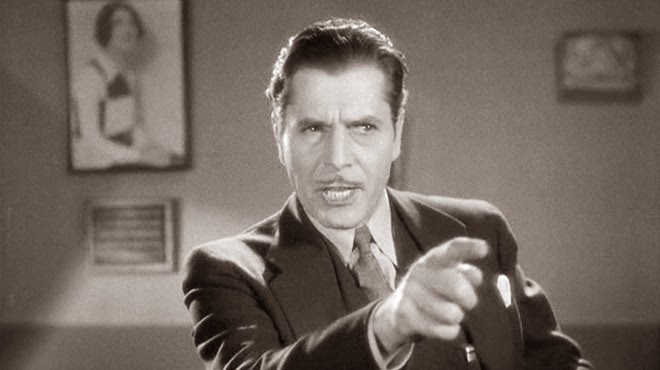 THE PLOT IN BRIEF: 42nd Street is the prototypical backstage musical, the yarn from which all other "lowly chorus girl becomes a star" films are spun. Producer Julian Marsh (Warner Baxter) discovers that he is very sick and wants to produce one more successful show (either to earn enough spondulicks to support his infirmity or to insure his professional reputation after he dies.) He holds auditions for the chorus, but chooses difficult star Dorothy Brock (BeBe Daniels) as his leading lady because her sugar daddy is bankrolling the show. Billy Lawler (Dick Powell) is chosen as the juvenile lead. After grueling weeks of rehearsal and various shenanigans, the show is ready to open. At the very last minute, Brock breaks her ankle, allowing young and naive chorus girl Peggy Sawyer (Ruby Keeler) to step in for her on opening night and become a star. The film has a downbeat coda in which Marsh, hiding in the shadows of the theater's back alley, overhears audience members raving about the show and joking that Marsh will probably hog all of the credit. It is a curiously downbeat finale for a film so full of joy.

Because this is a 1930s Warner Brothers film, we learn to take the sweet with the sour. No other studio during the Great Depression so successfully mixed social realism with escapist entertainment. This lends 42nd Street the charming quality of being at once a potent reminder for original audiences about what was really going on outside the theater and a charming escape from it. The film is not shy about detailing the desperate, sordid lives some of these actors and dancers lead. It is during the show-with-a-show's song and dance numbers that we (and the principals) experience transcendence.

Though Lloyd Bacon directed the film, Busby Berkeley choreographed the musical numbers. Berkeley was the genius of '30s and '40s musicals. Ever see a movie where we cut to a camera "on the ceiling" staring down at a group of chorus arranged to look like a blossoming flower, or a spinning windmill, or a highly organized army of ants carrying away an entire pick-a-nick lunch? Berkeley invented that. His camera floats, it dives, it shimmies through the legs of row upon row of nubile chorus girls. In his seminal book Cult Movies, Danny Peary suggests that, while the musical numbers of Fred Astaire and Ginger Rogers at rival studio RKO were metaphors for seduction, over at Warner Brothers Berkeley used his camera so aggressively and so intrusively that his camera work mimicked the sexual act itself. 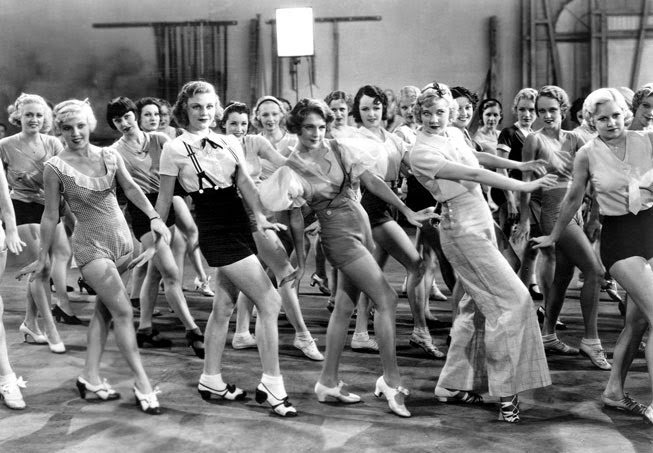 We can see all of Dyer's categories represented here, some gloriously and archetypically. "You're Getting To Be A Habit With Me," which is repeated twice in the film, is a fine example of "Transparency;" it's also really sweet. I find it very interesting that all of the film's remaining musical numbers—"Young and Healthy," "Shuffle Off To Buffalo," and "42nd Street"—fit into the category of "Abundance." Thus we can use Dyer's categorical system as a lens through which to view a film and support larger critical conclusions about the film itself. 42nd Street was released during what is commonly regarded as the worst year of the Great Depression. During the Depression, abundance was Utopia. Discuss.

Ultimately, this is a vision of Utopia with which I agree: a plentiful, never-ending Hollywood musical number, one in which we have friends, honesty, surplus, and the kind of stamina it would take to enjoy it all. This is a heaven that I can get behind.

"Heaven, I'm in heaven
And my heart beats so that I can hardly speak,
And I seem to find the happiness I seek
When we're out together, dancing cheek to cheek."
--Irving Berlin

Sigh. See you next week, music lovers!
Posted by Patrick Bromley at 11:55 AM