Drunk on Foolish Pleasures: Singing in the Rain

This film has been called "a musical for people who hate musicals." Here's why.

For decades, Singing in The Rain has been part of my teacher bag of tricks: it never fails to win over teen audiences who have tricked themselves into thinking that they hate Hollywood Musicals.

(OVER-LONG PARENTHETICAL: I suppose the exception that proves this rule happened a few years after I started teaching. I was introducing the film and asked the class to pay special attention to the "Moses Supposes" number, not only because it is well done and features the one song in the film NOT written by Arthur Freed, but also because commercial television showings at that time would often edit out the number to make room for more commercials. Blasphemy!

So I had alerted my class ahead of time that it was something special. Later, when "Moses Supposes" was on the screen, one of my students shouted, "THIS SUCKS!" and walked out of class. To this day, I do not know what aggravated him so. I DO know that it is my intention to find him on the Google machine after my retirement when I will have time for such things. I will track him down to his house (probably a scuffed refrigerator box on the seedy side of town) and tackle him to the ground. He will be surprised when I bite into his skull. First I will shout, "Disturb my class with your narrow-minded bullshit, will you? Well, THIS Moses supposes you're about to be FREED of your tiny BRAIN." ) 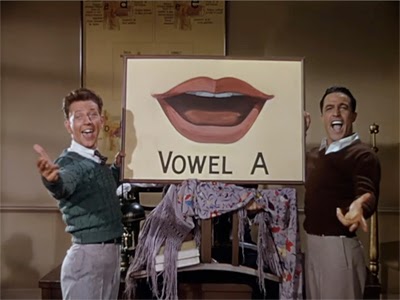 SOME BACKGROUND: Producer Arthur Freed started his career in Hollywood as a songwriter. He and partner Nacio Herb Brown wrote many of the songs featured in early MGM musicals at the advent of talking pictures. This was a monumentally successful pairing: their songs have been featured in more than 250 films and television shows.

Freed worked him way up to producer, and the "Freed Unit" eventually became the most prestigious on the MGM lot, producing The Wizard of Oz, Babes in Arms, Cabin in the Sky, Meet Me In St. Louis, The Harvey Girls, Easter Parade, Annie Get Your Gun, The Band Wagon, and An American In Paris. If you like MGM musicals, what you really like is the work of Arthur Freed. In fact, the MGM cash grab/ compilation film That's Entertainment! (1974) is practically Freed's resume on film.

In the early 1950s, Freed got the idea to feature his 1920s songwriting catalogue in a new film. He hired partners Betty Comden and Adolph Green to write a script. Because the songs sounded old fashioned, they decided to set the film in the past and actually walked the MGM lot, collecting stories from old-timers about the coming of sound pictures. Thus, Singing in the Rain was born.

THE PLOT IN BRIEF: Silent film star Lina Lamont (Jean Hagen) and her leading man, Don Lockwood (Gene Kelly), are the most popular matinee idols at Monumental Pictures. The studio's publicity department manufactures a romance for the movie magazines, and Lina actually believes Don is in love with her; he is not, because she is a shrewish harpy with a ridiculous, high-pitched voice. Still, Lamont and Lockwood's movies continue to be huge hits. Then sound comes to film, and it looks as if squeaky-piped Lamont will be out of a job—until Don's best friend Cosmo Brown (Donald O'Connor) dreams up a scheme to have Don's sweet new love interest, cute-as-a-button Kathy Seldon (Debbie Reynolds), dub all of Lamont's dialogue. Hilarious hijinks ensue.

FOUR REASONS WHY EVERYBODY LIKES SINGING IN THE RAIN:

1) IT IS ABOUT MAKING MOVIES. 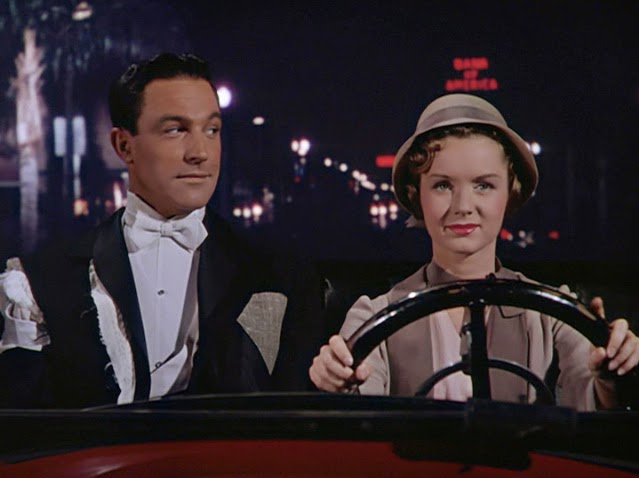 4) MOST OF THE MUSICAL NUMBERS ADVANCE THE STORY. . .
AND ARE PEPPY! (PEOPLE LIKE "PEPPY.")

Last week, I wrote about Richard Dyer's system for categorizing the musical numbers in Hollywood musicals. Using that cool system, we find that Singing In The Rain is awash in numbers that fall into the category of ENERGY. People love "Energy" numbers. Almost half of the movie's musical numbers fit this category: "Fit As A Fiddle," "All I Do Is Dream Of You," "Make 'Em Laugh," "Moses Supposes," and "Broadway Melody." Perhaps more significantly, the first three musical numbers in a row fall into this category--just the thing to engage a fresh audience right off the bat.

In fact, a single number was shot but then cut before the film was released. It showed Kathy wandering around the studio backlot, singing "You Are My Lucky Star" to a billboard image of her secret crush, Don Lockwood. Although this would have amplified the impact of the movie's final image (Kathy's own face appearing on a billboard alongside Don's), the filmmakers were right to cut it. Given where "Lucky Star" would have fit into the film's continuity, the song would have given audiences three "Transparency" numbers (slow love songs) in a row. It works for the "Energy" numbers, but modern audiences have very little patience for "Transparency" numbers. 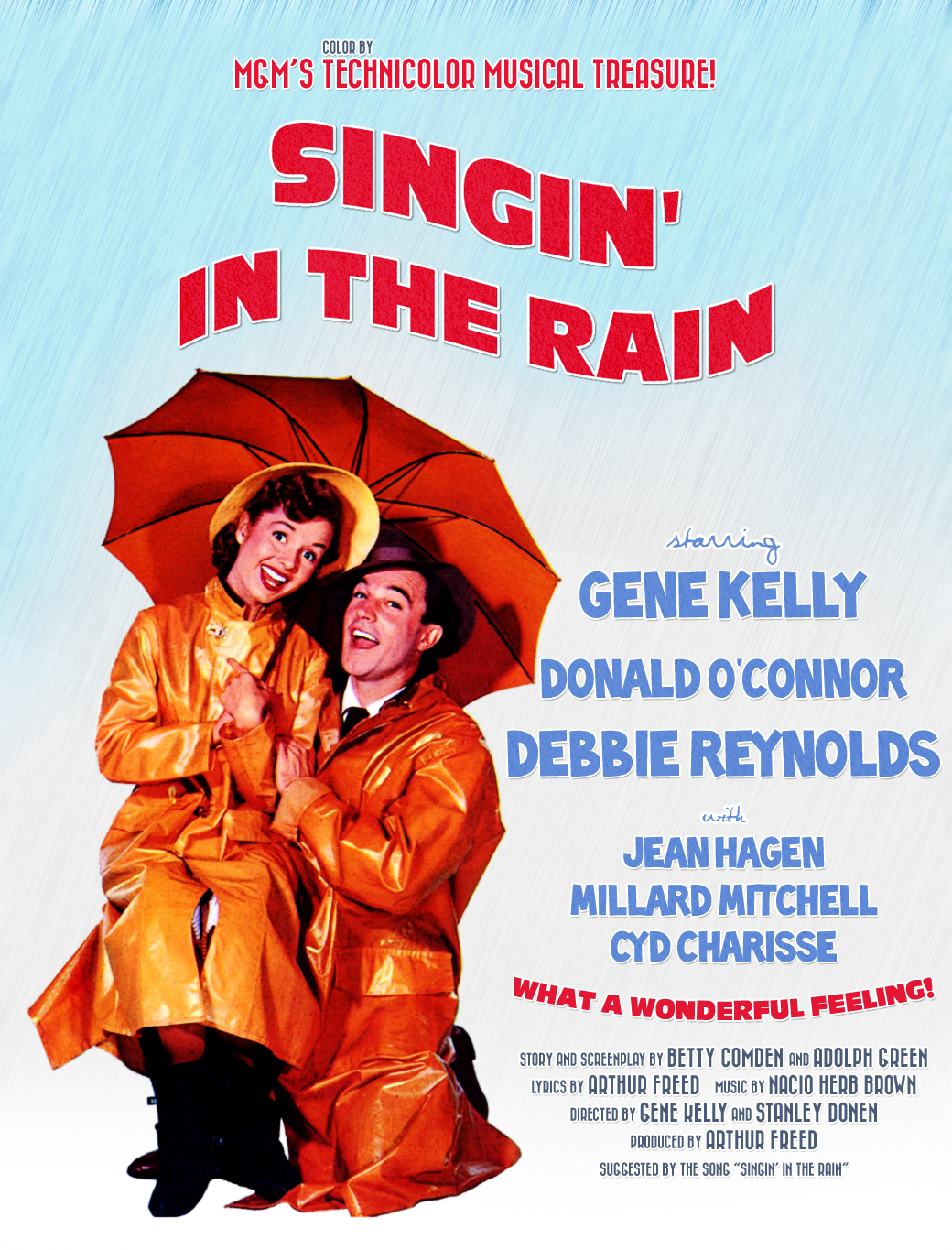 BEHIND-THE-SCENES TANGENT: For decades, the story persisted that, when Donald O'Connor shot his famous "Make 'Em Laugh" number, he went home dog tired because all day he had been forced to repeat the same exhausting stunts and tomfoolery again and again and again for the cameras. The story goes that his wife made him a martini and he went to soak in a hot tub. The phone rang; it was director Gene Kelly at the studio. Seems the lens on the camera was fogged, and O'Connor had to go back the next day and do the whole thing again.

About a year before Donald O'Connor passed away, I attended an Ebertfest where Roger screened Singing In The Rain and hosted O'Connor as a special guest. An audience Q & A followed the screening, and someone actually asked him if that story were true.

According to O'Connor, the story is bullshit. Great story though.

I love Singing In The Rain. I wish I could run up walls just like Donald O'Connor does in the movie. That would be something.
Posted by Patrick Bromley at 1:13 PM