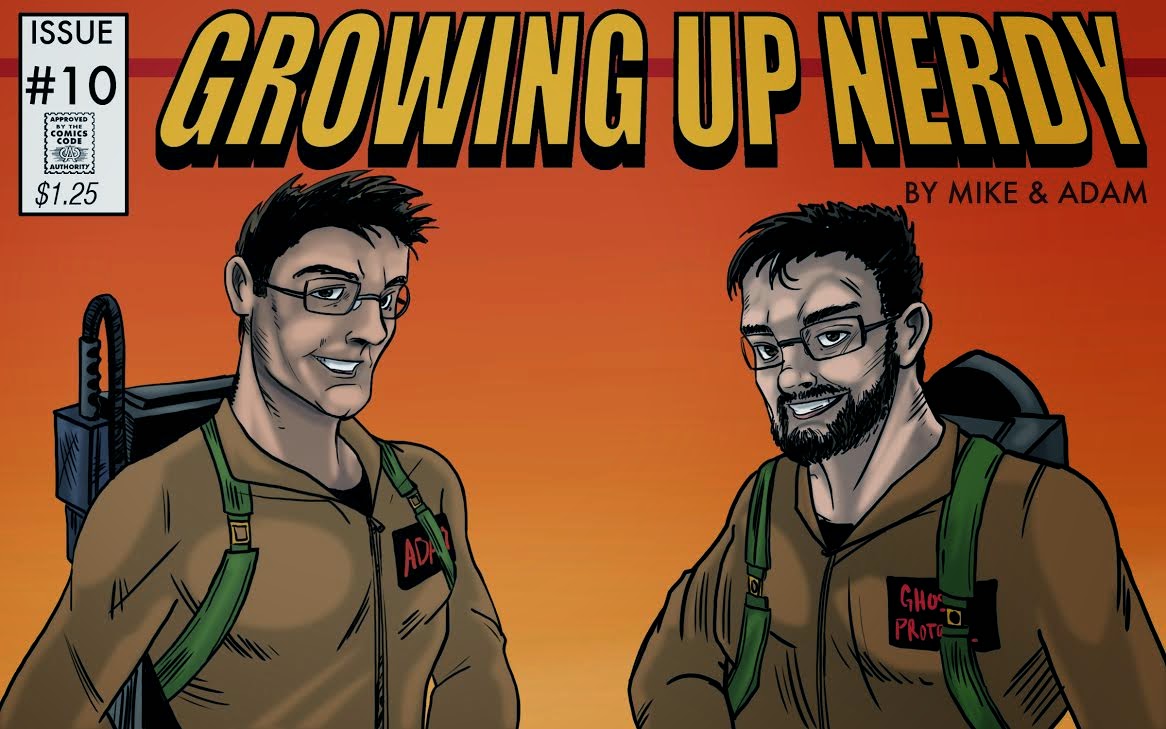 All comics, all the time.

I find myself reading some comics and really wanting them to be made into movies. What are some of the ones you've always wanted made into a movie?

Adam: Well, first and foremost I’d love for them to make a Green Lantern movie that doesn’t suck enormous King-Kong sized monkey dick. After that, it’s tough, because as comic fans we live in the Golden Age of comic-book movies. After contemplating this, here are the ones I really want to see from different types of comics:

Mainstream Superhero
Shazam: I really think that the idea of a kid who speaks a magic word and becomes this all-powerful superhero would play really well. He is a great character with a lot of history, a great costume and one of the best villains in Black Adam.

Adam Strange: Okay, I realize that most of you read this and have NO idea who he is. He’s a niche character. Adam Strange is a guy who got zapped by a interplanetary ray and was instantly transported to the planet Rann. He falls in love with one of the women on the planet and becomes the hero of the planet. It’s really interesting because in some incarnations of Adam Strange he can’t control when the beam will take him back to earth, so he is living this dual life between the one on Rann and his life on Earth. 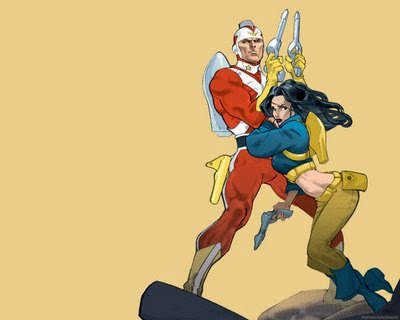 Comic Storyline
Infinity Gauntlet: I will argue that the one thing DC does WAY better than Marvel is the crossover. In my opinion, Marvel has done one great crossover: The Infinity Gauntlet. I’d go into this more, but from what I’ve been seeing of the recent Marvel Studio’s movies, we are going to get an Infinity Gauntlet story in the next few years.

Indie Comic
Scud: The Disposable Assassin: Okay, I know I’ve mentioned it before, but this is one of my all-time favorite books. It takes place in a future where murder is legal… as long as you don’t get caught. So people can purchase robots called “Scuds” in vending machines and give them a person to kill. The robot will then go and kill its target and immediately self-destruct, leaving no evidence. The book follows a particular Scud that realizes after he kills his target he will die, so instead maims his target, putting it on life support. The Scud now needs to pick up random kill jobs to pay for the hospital bills. The comic is so surreal and off the wall. I’d love to see a computer animated version!

Probably a better TV show than a Movie
Y: The Last Man: This book is AMAZING! Y follows a guy named Yorick who, after a plague that wipes out every man on the planet, finds himself as the last man on Earth. It takes a male fantasy and completely turns it on its head, and incidentally is the only comic to ever make me cry. BTW my original answer was DMZ, but it appears that is already in the works.

The only problem with hoping and wishing for your favorite books to be turned into a movie is that for every Spider-Man 2 you get a Ghost Rider.

Mike: It’s hard to imagine that there’s a comic book property that HASN’T been made into a movie yet. My answer for the longest time, however, was Preacher, the very R-rated Vertigo (DC Comics) book by Garth Ennis and Steve Dillon. Preacher is my all time favorite series and one that I always wanted to see on the big screen. Thanks to Seth Rogan, it looks like I’ll finally get my wish, although I have to admit I’ve backed off of that desire a bit. Just like how Adam feels about Y: The Last Man, I think Preacher would work better as a series on a channel like HBO. It has a finite story (it ran 66 issues) and would benefit from a format like television. 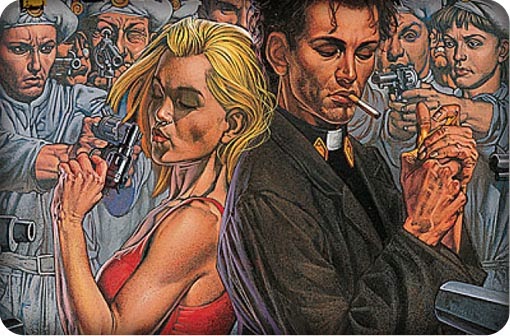 On the flip side of that coin, let’s discuss a comic book based on a movie. I’m really, really excited for Boom Studio’s Big Trouble in Little China comic book coming out later this year, based on the cult classic John Carpenter movie. At the Chicago Comic book and Entertainment Expo (C2E2) last week, I was able to talk to Eric Powell, the creator of the great Goon series and the man behind the Big Trouble book, for a few minutes. He said that he’s been talking to John Carpenter and that they are on the same page with the direction of the book. It’ll be a sequel of sorts to the movie, not just an adaptation of the film itself. New Jack Burton material is good news. Eric Powell and John Carpenter working together on it is even better news.

I overheard a some of the guys at the comic store talking about “CGC.” What is CGC? Have you ever used it?

Adam: CGC (depending who you talk to) stands for A LOT of different things. I’ve heard it stands for “Comic Grading Company” or "Certified Grading Cohort," but what it stands for (at least according to the website) is Comics Guaranty LLC. Back in the early 2000s, CGC came onto the scene and it was pretty much a game changer in the collectibles market. What the company does is grade comics on a scale between 1-10 and seals them in a plastic container, certified, with the grade marked on it.

To be honest, I have a love/hate relationship with them. Pre-CGC, the comic grading system was largely based on the Overstreet Price Guide, an annual publication that literally has the price of nearly every comic ever printed. It also lists the various grading levels for a comic. They are (from best to worst) Mint, Near Mint, Very Fine, Fine, Very Good, Good, Fair and Poor….with a bunch of levels in between. Here is the inherent problem with this system: 90% of the time, the guy grading the comic was the guy selling you the comic. You needed to take the guys word for it, and in many cases three different guys would come up with three different grades. A lot of times you would go to sell a comic to a dealer, he’d tell you it was in “Good” condition, then turn around and sell it as “Very Fine.”Assholes!

Then along came CGC. CGC is a 3rd party company that basically equates the old system (which could be confusing) to a number grade. The way it works is you either send the comic to CGC or drop it off at their booth at a ComiCon. It goes through multiple grading processes, and after about two months they send it back to you with a grade on it, sealed in a plastic container. They don’t have a hand in the purchase or the sale of the comic, so it is significantly more trusted. Additionally, that comic can be bought and sold multiple times and pass through numbers of transactions and still maintain the same grade.

Here is the biggest problem with CGC and where my “love/hate” relationship comes in. You can’t actually READ the comic. Besides an Incredible Hulk #181 (first Wolverine), the prize of my comic book collection is a copy of Silver age Green Lantern #1-10, complete with the first appearance of Sinestro and the Yellow Ring. I’ve only opened my copy of Green Lantern #1 once to read it, and I savored that entire experience. Something about the smell and the feel and the little tracks from the printing machine found on the edges is just intoxicating. To me, part of the purchase price was being able to have that experience. Comics were meant to be read; yes, I can get a re-print and read the exact same story, but it just isn’t the same (the longer I write this, the more I realize I sound like an addict). The idea of the journey the comic took to where it's now mine to read is awesome. Now you send it to CGC and they seal the fucker in carbonite. 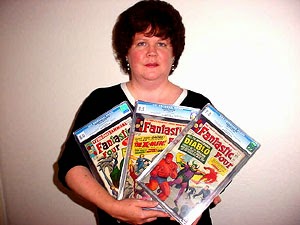 I used CGC for the first time at this year's C2E2 convention. Years ago when The Walking Dead first came out, I was REALLY into it. I was so into the story that I couldn’t wait to read the next issue, so I would pick up a copy off the rack at a store near my work, even though the comic store by my house was pulling issues for me. (Some of you don’t know what that means. I am part of a comic-club at my local store. So you don’t miss an issue, they will order you a copy and put it in a box for you so they don’t sell out). Around Issue 40 of The Walking Dead, I stopped reading it. SPOILER ALERT!!! In the comic (not the show), The Governor straight up rapes Michonne -- ties her down and rapes her. SPOILER OVER!!! There are some places I don’t want my comics to go, so I opted to stop collecting the comic.

I moved a few times and gave away a bunch of my comics, never to see Walking Deads again. Giving away those books was particularly upsetting when the prices on the books BLEW UP! We’re talking an ungraded #1 is going up to $1,000, and $4,000 for the upper grades. So I proceeded to kick myself every ComiCon, looking at the small fortune I ended up giving away. This past year, my parents moved out of their house and told me I needed to remove the few boxes of comics I had stored there. I went over to my old closet and sitting in the back was a small box. I opened it up and there it was -- my complete run of The Walking Dead #1-38, bagged and boarded just as I left it. Knowing they were in great condition (after all, I never read these issues, these were the ones the store was pulling) I decided to swallow my pride and get them graded. Currently a #1 graded 9.8 or above is going for about $2,000, so here’s to crossing my fingers and hoping. Because I’ll quickly need to sell that and use that money for…. remodeling the bathroom. I hate my life.

Mike: When CGC first became a thing, I was not a fan of it. I hated the idea of sealing up a comic book, making it unreadable. Comic dealers took these books with high grades and sold them for ridiculous amounts of money. It almost didn’t matter what the book was – as long as the grade was high, people were spending a lot of money to own it. So weird. BUT I’ve come around a bit over the years. I still think it’s fucked up that a comic dealer would sell Ravage 2099 for an inflated price because CGC says it’s a 9.8, but I now understand how helpful CGC can be.

Grading comic books can be difficult. There’s so much to look for, from spine condition to corner creases. There could be tears within the comic book, coupons could be missing (like Incredible Hulk #181, first appearance of Wolverine). The list goes on and on. Let’s say I have disposable income and my wife decides it’s okay that I drop a couple of grand on a comic book. Awesome! However, if I I’m going to spend that much money on a comic book, I want to make sure it’s in the condition I’m being told it’s in. CGC solves all if that. Now I can look at a book and the score in the upper left hand corner tells me everything I need to know. And while it’s sealed and I’m unable to read that particular comic book, thanks to reprints, trade paperbacks and Comixology, I can read just about any comic out there without having to handle the vintage issue itself.

I can live with that.
Posted by Patrick Bromley at 7:25 AM