Want to know how much I love this movie? I named my son after the main character.

Oh, sure—there were other Jakes besides Jack Nicholson’s Jake Gittes in Chinatown, like Belushi’s Joliet Jake in The Blues Brothers, and Robert DeNiro’s Jake LaMotta in Raging Bull, and Body by Jake, a popular series of workout cassettes in the eighties, and of course, my wife’s beloved Uncle Jake. We decided that “Jake” had nothing but positive mojo behind it.

For decades, Hollywood has considered Robert Towne’s original screenplay for Chinatown one of the best screenplays ever written. It’s been held up as a shining example of the craft; it is still taught in screenwriting classes from sea to shining sea.  These accolades are certainly earned; Chinatown’s screenplay is one of the main reasons the film is a masterpiece. 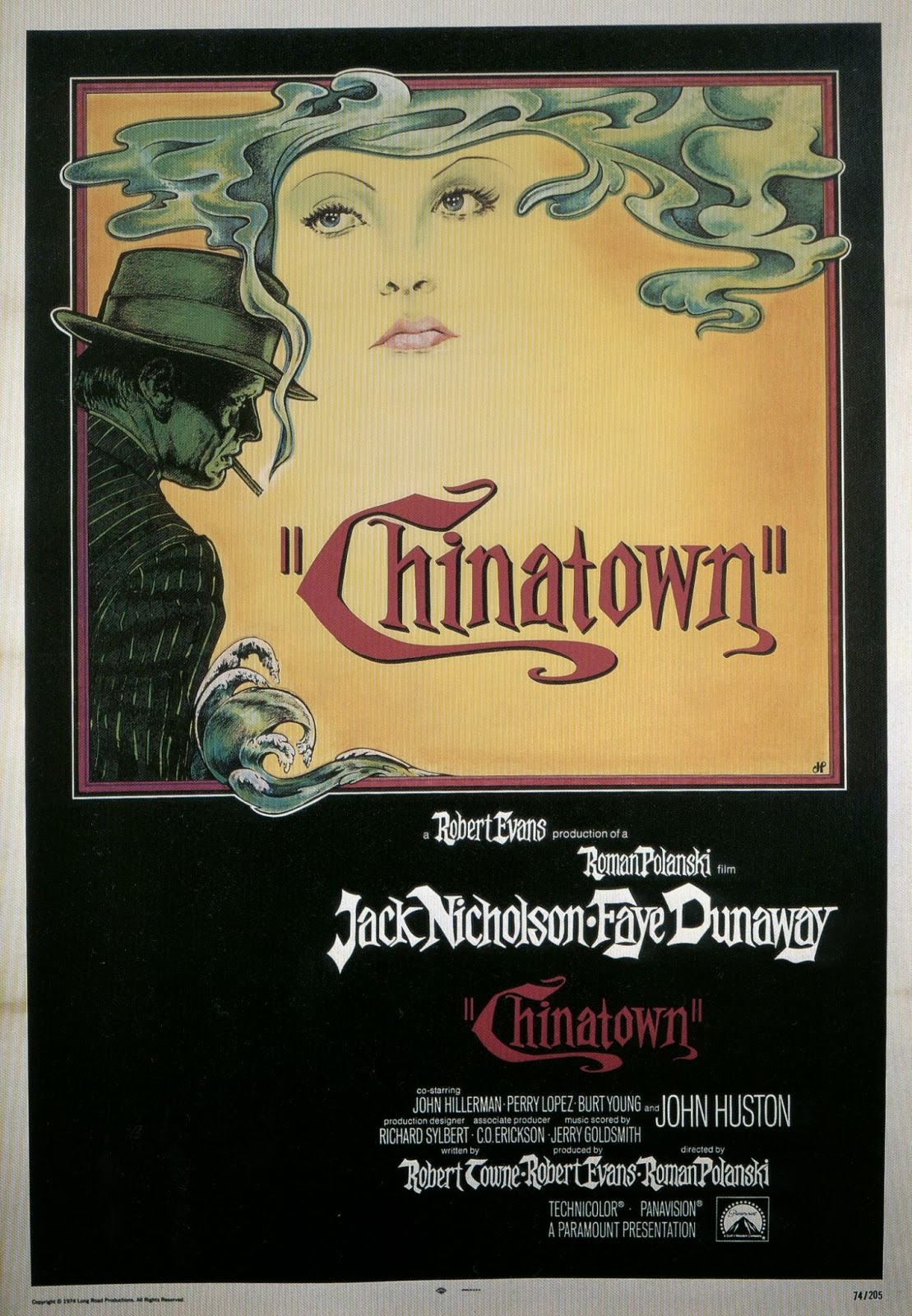 In Chinatown, Robert Towne spins a yarn so potent that one of my most vivid childhood memories involves the film. I was not allowed to see Chinatown in a theatre; I was only twelve when it was released, and it was rated R. One afternoon, my teenaged cousin Joanne stopped by my house and quickly started an animated conversation with my mom. Joanne had just seen Chinatown and loved it SO MUCH that, over the course of the next hour, she summarized the whole plot for my mother, spoilers and all. I was in another room, but heard their entire (one-sided) conversation. So, even though I would not actually see Chinatown for another ten years or more, it had been effectively spoiled for me when I was only 12.

The Plot In Brief (well, briefer than Joanne): Jake Gittes (Jack Nicholson) is a private investigator specializing in marriage cases. Spouses hire him to “get the goods” on their cheating partners and bring back pictures they can use in court. Turns out, Jake used to be on the L.A. Police force; some incident, it is darkly hinted, forced him to quit. Evelyn Mulwray (Faye Dunaway) walks into his office one day and asks Gittes to investigate her husband, who she suspects of cheating. Gittes’ investigation leads to far more nefarious revelations than simple adultery. He also discovers that Mulwray, her husband, her father, and her daughter are not all who they pretend to be.

The film features one of the more famous (and tragic) twist endings, and I shall not spoil it here. Suffice it to say that Towne has not led the audience down a thorny primrose path for two hours merely to surprise them; he has devised a twist ending that, in its mercilessness and all it implies, stands as our most potent cinematic metaphor for the heart of evil in the center of every film noir.  The conclusion of Chinatown is formed not only of tragedy, but of unspeakable acts and unspeakable evil. This is a film that one cannot simply brush away once one leaves the theater.

Like Joanne, for instance, who clearly needing to expunge herself of the tale by spilling it to someone else. (In retrospect, this may have been why my mother did not enter a movie theatre AT ALL between 1974 and 2011.)

The performances in Chinatown are uniformly excellent. Some think Jack Nicholson is the whole show. I disagree, but I can see why people are blown away by his performance; it is among Nicholson’s best. (This was well before Nicholson’s performances became impossibly mannered, as if he was somehow impersonating the thousand mediocre stand-up comedians doing shitty impressions of him in their shitty, hacky acts. I used to think these problematic performances began with The Shining, but that movie is so terrific, I’m now convinced it was probably Batman.) The fact that Nicholson gets his nose cut open about thirty minutes in, and goes through the rest of the film bandaged up, is still considered the height of seventies method acting and proves Jack had a refreshing lack of vanity.

I usually find Faye Dunaway to be the most impossibly mannered performer, but as with her performance in Network, her character here plays into those mannerisms and gives them some context. There’s a good reason Evelyn Mulwray acts crazy, and it’s not just because Dunaway is playing her. Director Roman Polanksi also scored a coup in casting John Huston as the film’s villain; is it hard to imagine anyone else playing the part (or giving his dialogue the wheezy/sleazy/slick quality that Huston provides). Huston’s presence also provides a link to “old Hollywood” and the very noir tradition that Houston himself helped set in motion by directing The Maltese Falcon.

Chinatown‘s dialogue makes the film deliciously re-watchable. How great is Robert Towne’s ear for dialogue, you ask? Well, he was one of the uncredited writers on The Godfather, and wrote the final scene between Pacino and Brando. Here are some choice snippets of dialogue from Chinatown:

Man With Knife (Roman Polanski)
You're a very nosy fellow, Kitty Cat. Huh? You know what happens to nosy fellows? Huh? No? Wanna guess? Huh? No? Okay. They lose their noses.

Jake Gittes
But, Mrs. Mulwray, I goddamn near lost my nose. And I like it.
I like breathing through it. And I still think you're hiding something.

Jake Gittes
I just want to know what you're worth—more than 10 million?


Jake Gittes
Why are you doing it? How much better can you eat?
What could you buy that you can't already afford?

Noah Cross
The future, Mr. Gittes! The future. Now, where's the girl? I want the only daughter I've got left. As you found out, Evelyn was lost to me a long time ago.

Jake Gittes
Who do you blame for that? Her?

Noah Cross
I don't blame myself. You see, Mr. Gittes, most people never have to face the fact that at the right time and the right place, they're capable of ANYTHING.

Director Roman Polanski deserves a lot of credit for the film’s ultimate success. Much has been made of Polanski’s decision to film a noir in the daylight, to eschew film noir’s usual chiaroscuro/German expressionist lighting in favor of bright whiteness and a color palette that runs to yellow and gold.

This has been written about ad nauseam, but I think Polanski’s directorial decisions here go far beyond mere photographic filigree; Polanski’s real triumph is making a film that is oddly contemporary and yet rooted in the past. It has all the trappings of classic 1940s noir, and yet speaks to issues and concerns of the early 1970s in a big, loud voice.

This reminds me of something I focused on while watching the recent HBO True Detective series, and something that I think speaks to the essence of all film noir. In one episode, Matthew McConaughey’s character muses about an unspeakable crime he once witnessed: 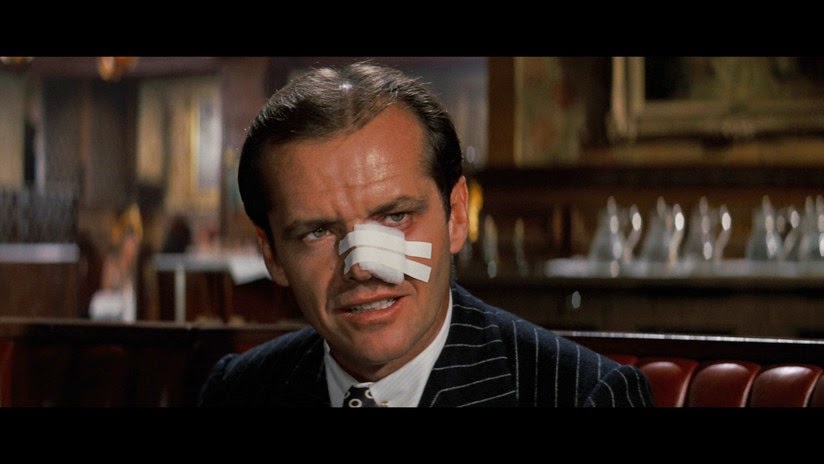 The Western genre allows us to pat ourselves on the back by explaining why, as a culture, we decided to put down roots and build houses, churches, and schools. The Horror genre allows us to witness violent death without any of its consequences and reminds us of how great it feels to be alive. Film Noir goes somewhat deeper: it forces us to simultaneously approach and flee the worst parts of ourselves. Film Noir imparts revelations that are not so easy to shrug off once we leave the theater.

Film Noirs are certainly cathartic in that most of our lives are nowhere near as screwed up and twisted as the characters’ in the films. Yet something sticks with us whenever we watch Chinatown. (Is it our conscience? A tacit acknowledgment of the sheer banality of evil?) The tragic ending of Polanski’s film (indeed the various tragedies that lie at the core of all film noirs) cannot be stopped, can never be stopped. Tragedies—as inevitable as rain—just keep happening again and again, from generation to generation.

That is how it goes and goes. “Forget it, Jake. It’s Chinatown.”
Posted by Patrick Bromley at 11:46 AM