Hello, Hooray! The king of exploitation rock finally gets a film worthy of his musical legacy.

I won’t bury the lede: Super Duper Alice Cooper is the best rock and roll documentary to come along in ages. It does things I’ve never seen any other rock-doc attempt and isn’t afraid to step outside of the traditional music biography box. The film comes from Sam Dunn and Scot McFayden, the team (director and producer, respectively) behind Metal: A Headbanger’s Journey, Iron Maiden: Flight 666, and VH1’s 11-part Metal Evolution series, and from Reginald Harkema, who might most be recognized as the director of the Sean William Scott hockey movie Goon. 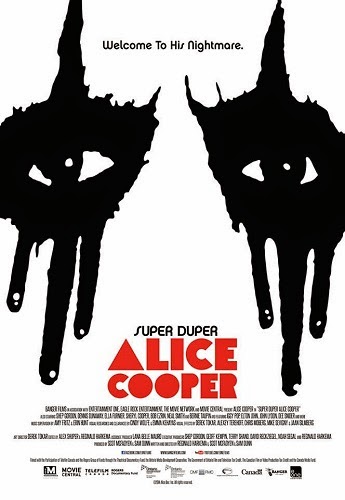 Super Duper Alice Cooper chronicles the career of one of rock’s most infamous (and beloved) personalities, Vincent Furnier, aka Alice Cooper, the man behind “I’m Eighteen” and “School’s Out,” as well as a slew of other rock radio staples. The musician’s life and work is not new territory; there’ve been two Behind the Music episodes (the original and a “remastered” update) that focused on the shock-rocker, as well as numerous TV specials and documentaries on the star’s musical progress over the years. This, however, stands as the best and most informative documentary. I’d even go as far as to call this THE DEFINITIVE Alice Cooper documentary. Made with not only Cooper’s full cooperation but also that of his original Alice Cooper bandmates as well as the people who contributed to the phenomenon, such as music producer Bob Ezrin (KISS’ Destroyer and Pink Floyd’s The Wall) and Cooper’s manager Shep Gordon (subject of his own upcoming documentary Supermensch from Mike Myers), Super Duper Alice Cooper goes far deeper than any previous attempt ever has.

I mentioned that the documentary does things that I’ve never seen before. One of these things is never once showing a single talking head. There are tons of new interviews recorded exclusively for this film, yet not a single frame of any of these interviews is visually shown. Rather, the filmmakers have chosen to roll those interviews under archival footage and photographs (many of which are given incredible depth using what appears to be 3D technology; we literally travel INTO the old photographs), something that gives the film a sense of immediacy. The handy and informative booklet that came with the Blu-ray disc explains that this was done to prevent the film from having the “back in my day” effect that many documentaries about older stars seem to share. Far from being confusing, this decision to keep the interviews to audio-only has the effect of making the viewer a fly on the wall. You always know who is speaking and it makes the film MOVE without ever once showing anyone as they appear now. 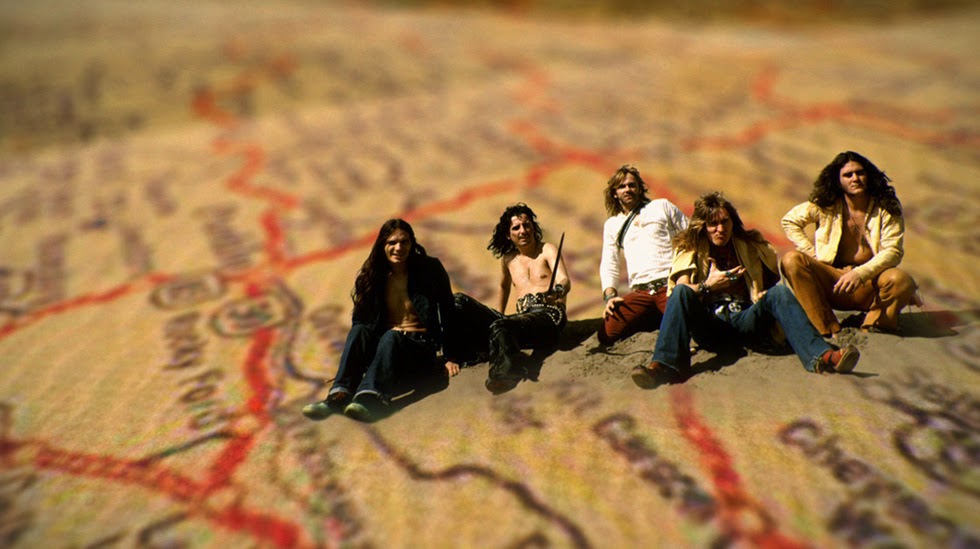 From the minute you put the disc into your player and the menu starts, you know you’re in for a real treat. Animated mascara runs onto a blood-red screen as “The Ballad of Dwight Fry” plays. Press play and the film itself begins, the opening intercut with footage of the 1920 silent horror classic Dr. Jekyll and Mr. Hyde starring John Barrymore. That older film is far more than just a throwaway, though, and actually serves as the narrative through-line to the entire documentary and pops up over and over as a new wrinkle develops in Mr. Furnier’s story. Also present are clips from The Cabinet of Dr. Caligari, giving the whole affair a chilling-yet-fun tone, like we’ve caught it on a public access channel late at night.

The filmmakers take us from Detroit to Phoenix, to Los Angeles and then back again. Along the way we watch as Cooper goes from playing in a Beatles cover band called The Earwigs during high school to opening for John Lennon at the Toronto Rock and Roll Revival just a few years later, meeting Salvador Dali and KFC founder Colonel Sanders, and eventually becoming a media darling on The Johnny Carson show.

I’ve seen a lot of Alice Cooper footage and even read his out-of-print 1976 autobiography, Me, Alice, yet I’ve still never seen (well, heard) Cooper be so unguarded and frank about the more personal struggles in his life, particularly his faith (he’s the son of a preacher who believes God saved his life on two occasions) and his demons. That handy booklet (it’s such a great bonus!) explains that the filmmakers pushed the interviews into territory that hadn’t really been covered before, especially pertaining to Alice’s late ‘70s and early ‘80’s cocaine addiction, which apparently Elton John’s frequent songwriting partner Bernie Taupin still feels responsible for (Taupin is the one who introduced Cooper to the white lady). 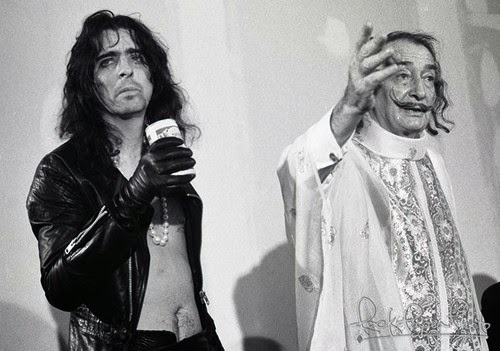 Speaking of Elton John, he’s here too, speaking about the impact that Cooper had on him in the years when they were both getting started. He recounts attending a concert where panties were literally dropped from an airplane onto the crowd below, and explains the impact the performance had on him. Elton even wrote a song about the effect Alice Cooper had on his audience: “All The Girls Love Alice” from the 1973 album Goodbye Yellow Brick Road. We also hear from Sex Pistols’ singer Johnny Lydon (Rotten) who has NOTHING BUT GOOD THINGS to say about Alice Cooper. I’ve honestly never heard Johnny Lydon say anything good about ANYONE, but he actually gives Cooper the best compliment possible by saying he always thought everything Cooper did was alright with him. He even sites Cooper as a major influence on the Sex Pistols. Lastly we hear from Dee Snider, frontman of Twisted Sister, who credits Cooper with ejaculating glam rock into the world.

As appreciative as I am for what’s here, I’m more appreciative of what’s NOT here. There aren’t really any celebrities in the film who have no immediate connection to Cooper’s career during those early years (I’m looking at you, Johnny Depp) or speaking of his impact on pop culture. There are no friends of friends, no jilted club owners, and no concert promoters. Virtually everyone who appears has some immediate connection to Alice Cooper and the music scene of the ‘60s or ‘70s. These are the people who had boots on the ground. These are the musicians who were there in the eye of the storm when it was all happening.

The themes of the film are the same themes of the classic horror movies that the documentary so deftly incorporates into the narrative. This is largely the story of a good man coming to terms with the darkness within him and the struggle to keep that darkness (which leads him to unparalleled heights and achievements) from consuming him. We follow Cooper through his alcohol and cocaine addiction, rehabilitations, and his lost creative years where nothing seemed to be working anymore. If the film takes a few expected turns and relies on clichés for narrative impact, the viewer can still take comfort in the fact that this is a story that needs few embellishments. This is the tale of a man who truly courted death for many years. The drama doesn’t need to be forced for impact; it’s already there. 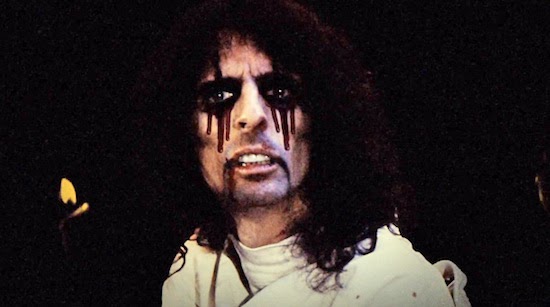 It’s worth noting that the documentary ends with Cooper’s return to the spotlight in 1986, clean and sober for the first time in his entire musical career. 1986 was a big year for Cooper: it was the year that he aired his comeback concert live on MTV, the year that he returned to his horror-rock roots with the album Constrictor, and the year he contributed the song “He’s Back: (The Man Behind the Mask)” to the Friday the 13th Part VI soundtrack. For Vincent Furnier, 1986 was a return to a persona that had been abandoned -- or more appropriately, lost -- for the better part of a decade.

And true to rock and roll providence, in 1986 the persona of Alice Cooper turned eighteen.
Posted by Patrick Bromley at 11:54 AM