Last week I had the good fortune to attend a screening at the Music Box Theatre’s Second Annual 70mm Film Festival; they were showing a newly-struck, archival print of Stanley Kramer’s It’s a Mad, Mad, Mad, Mad World.

It’s a Mad, Mad, Mad, Mad World is one of my favorite comedies; I would easily put it in my Top Ten. Some people find the film bloated and overlong, at two hours and 45 minutes; I say, there is more to love. In fact, the newly-released Criterion Blu-ray includes a restoration of the original “roadshow’ version that clocks in at three hours and eleven minutes! That’s a lotta laughter.

How can you explain why you find something funny? For me, there is something so wild and liberating about seeing the gang of “ordinary citizen” characters in the film shed all pretenses of morals and the social contract and behave in crazy ways. It is as if the promise of a wad of ill-gotten cash literally transforms these characters into cartoon versions of their own identities. There are moments in the film where their grotesque display of these outsized emotions and greed is simply breathtaking.

There are a lot of cool stunts too—with real cars and planes! 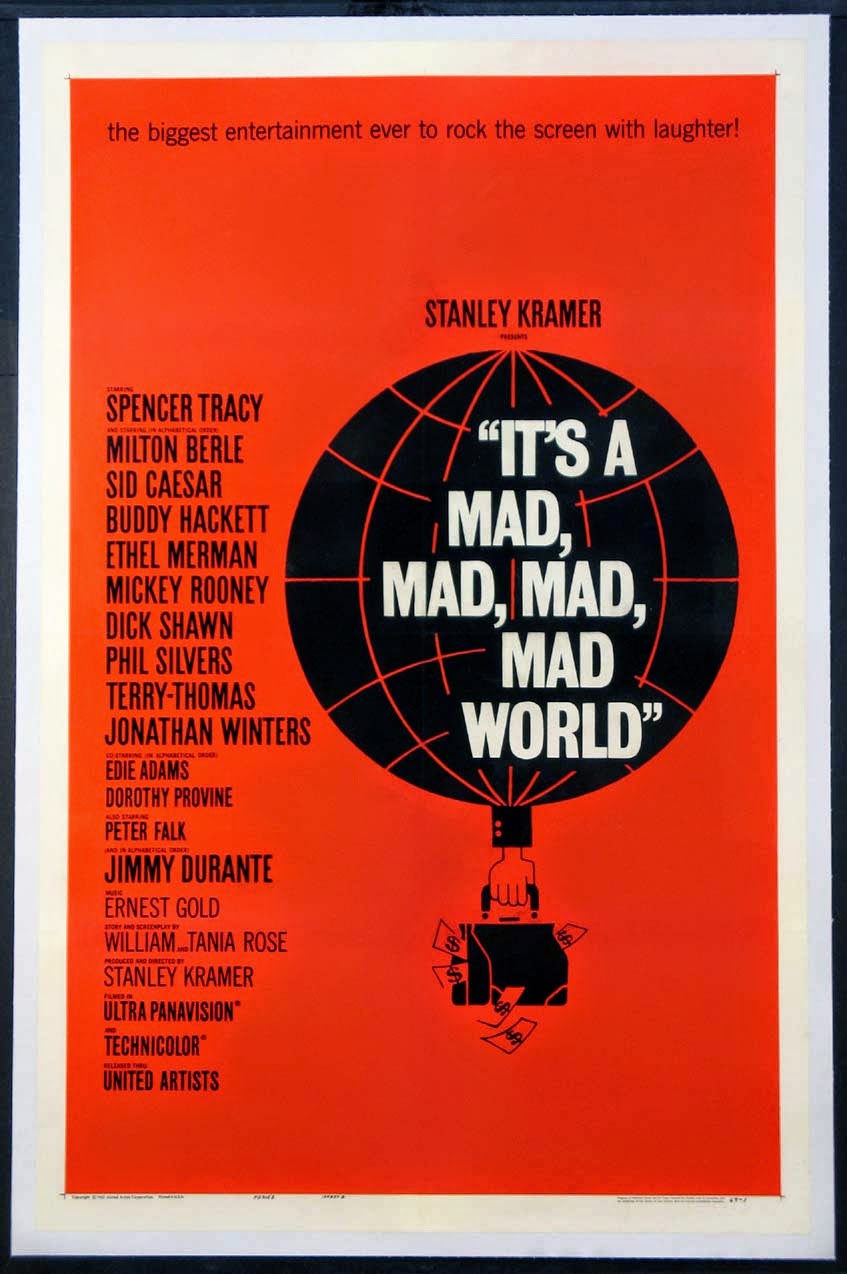 The Plot In Brief: A bunch of strangers driving down a twisting mountain road witness a horrific accident (I know – ALREADY HILARIOUS.) The men of the group go down to the scene of the accident and there they hear the dying words of famous gangster Smiler Grogan (Jimmy Durante), who spills the beans about the location of a buried fortune. Is Grogan telling the truth? Should the group try to find the money – and if they do, how should they split it up? When arguing breaks out amongst the bunch of bystanders—including dentist Melville Crump (Sid Caesar) and his wife (Edie Adams); timid J. Russell Finch (Milton Berle), his shrewish mother-in-law (Ethel Merman) and naïve wife (Dorothy Provine); loutish Lennie Pike (Jonathan Winters); and Las Vegas entertainers Dingy Bell (Mickey Rooney) and Benjy Benjamin (Buddy Hackett)—it becomes every man for himself and the majority of the film is a breakneck race to be the first to find the money. Our “heroes” wind up taking planes, cars, tow trucks, bicycles, and fire engines in pursuit of the loot…with Captain T. G. Culpepper (none other than Spencer Tracy) in pursuit of them.

Luckily for you, gentle readers, there is an alternative if your local reparatory theater is not equipped to show 70mm. The new Criterion Blu-ray is a stunner and features a new 4K transfer of the original camera negative. Trust me, I know this film, and Criterion’s disc features the single best transfer of a pre-digital age color film that I have ever seen. It’s a Mad, Mad, Mad, Mad World now enters the “Take All of My Money Hall Of Fame”: I have purchased this title on VHS, Laserdisc, DVD, and now Blu-ray. Once I even rented it on 16mm for a district “Film Day” I was hosting!

If you have never seen the film, I can think of several reasons it should be on your hot list. Mad, Mad, Mad, Mad has the greatest comic cast in motion picture history. To avoid spoilers, I have left out any mention of the dozens of big-star cameos, but just the principal cast is a dream team of funny people from the middle of the last century. It’s one of the craziest films ever made, with awesome practical effects around every twist and turn. Oddly enough, it’s also a beautiful film to look at; the cinematography, sets, and costumes are all first-rate. That does not happen much in comedies, which are famous for being shitty to look at. 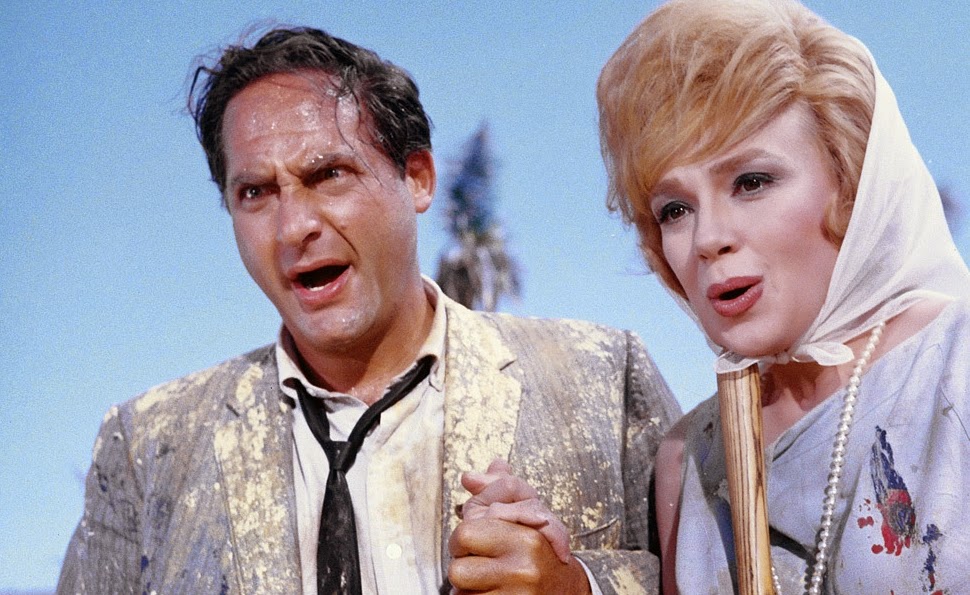 Even if I had not just enjoyed the film five days ago (with a crowded theater audience that also LOVED the film—heaven!) I could quote you my favorite lines:

“He just went sailing out there (appropriate hand gesture).”
“Okay, at least we all agree on THAT.”
“This is a girl’s bike. This is a bike for a little girl!”
“That’s my brother-in-law. Be careful of him—he’s not normal.”
“There’s no reason to be worried—they’re just four little sticks of dynamite.”
“I’m coming to save you, Mama. That’s why you had me—so I could come and save you!”

In fact, I was surprised and disappointed at the Music Box screening when the audience laughed so hard at one of Buddy Hackett’s lines that it completely drowned out Jonathan Winter’s next, far funnier line. Oh well, I will always have this disc that we can return to again, again, again, and again—alone. Or I could just shout the line out whenever I feel like it! My wife loves that!

Listening to the commentary track on the “roadshow” restoration, It’s a Mad, Mad, Mad, Mad World experts Mark Evanier, Michael Schlesinger, and Paul Scrabo present a tantalizing glimpse into a sort of “alternate version that never was”—what the film would have been with slightly different casting. They affirm that television legend Ernie Kovacs was supposed to play Melville Crump, but Kovacs died in a tragic car accident before filming began. They present tantalizing evidence that Buster Keaton, glimpsed briefly at the end of the film, was originally slated to play gangster Smiler Grogan, who sets the plot in motion (in fact, they suggest that naming the Great Stone Face’s character “Smiler” was screenwriter William Rose’s idea of a joke.) Jimmy Durante, who ended up playing Smiler, was originally cast in the part Keaton wound up playing, Jimmy the Crook.

But the most mind-bending revelation is that, at a very early stage of production, Mickey Rooney’s partner in It’s a Mad, Mad, Mad, Mad World was not Buddy Hackett, but Judy Garland! Imagine if the film had reunited those two; we would have witnessed Andy Hardy and his favorite girl from the 1930s transformed into a crazed, middle-aged married couple in the 1960s. What I would give to see that version of the film. The disc does contain one bittersweet supplement: a Q & A hosted by Billy Crystal and taped before an Academy screening in 2012 with most of the surviving cast: Carl Reiner, Stan Freberg, Barrie Chase, Marvin Kaplan, Jonathan Winters, and Mickey Rooney. Since that taping, we’ve lost both Winters and Rooney. I realize the film is now more than fifty years old, but still, that really saddens me. At least the entire cast of It’s a Mad, Mad, Mad, Mad World have the film itself as their legacy, and through it they achieve a kind of immortality.

I know that Music Box audience last week will not be forgetting any of them any time soon. They howled. I have not heard laughter that loud in a theater in a long, long, long, long time.