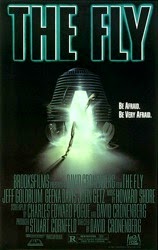 I love the king of Canadian horror.

You can't talk about the most important or influential horror filmmakers of the last 40 years without mentioning David Cronenberg, a director who essentially owns the entire sub genre of "body horror." Those outside the genre tend to generalize his body of work as consisting of fucked up movies where people have sex with cars in their stomach vaginas. Those of us who know better recognize that his filmography is much more varied than he usually gets credit for. Here are the essential films of David Cronenberg...stomach vagina and all. 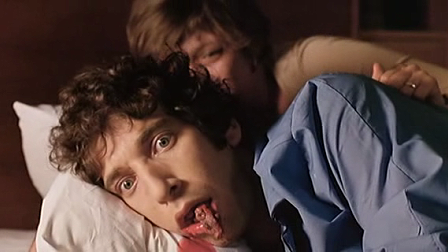 1. Shivers (aka They Came From Within) (1975) Cronenberg's first feature announces exactly who he is right out of the gate -- a rarity for most filmmakers, who can often take several movies to find their voices. Sure, it's technically rougher than his later films would be, but the ideas are all there. An upscale apartment complex becomes infected by a special virus that's transferred via a kind of slug-like parasite, creating intense sexual desire to anyone who catches it. Cronenberg is already doing body horror and exploring his favorite theme: the idea of sex as a disease and its intersection with death and decay. It's an idea he would revisit in his next film, 1977's Rabid, which follows a very similar plot (only there it's a vampiric appendage that appears in the armpit of porn star Marilyn Chambers [THAT WAS IN A MOVIE]). Cronenberg made many better movies over the course of his career, but there's something fascinating about watching him work out some ideas and imagery in a kind of primitive state. The roughness is the film's best quality.

2. Fast Company (1979) Probably not essential Cronenberg, but worth including because it shows the filmmaker trying to branch out of horror early on in his career. An avowed car enthusiast, Fast Company finds Cronenberg indulging in another of his obsessions to mixed results. The movie is fun and it's interesting to see the way that Cronenberg is fascinated by machines -- it's the same cold fascination he applies to human sexuality -- but there's just not enough of him in it to make it mandatory viewing. Perhaps that's because it was the first movie for which he did not write the screenplay alone, or perhaps it's because we so identify certain ideas and images with Cronenberg that a movie without them just doesn't seem like one of his. More a curiosity than required viewing, but in trying to get a complete picture of Cronenberg as a filmmaker it's a necessary step. Had it been a huge financial success (it was well-received by critics), we might not have gotten the next 10 years' worth of Cronenberg. That's his best period. 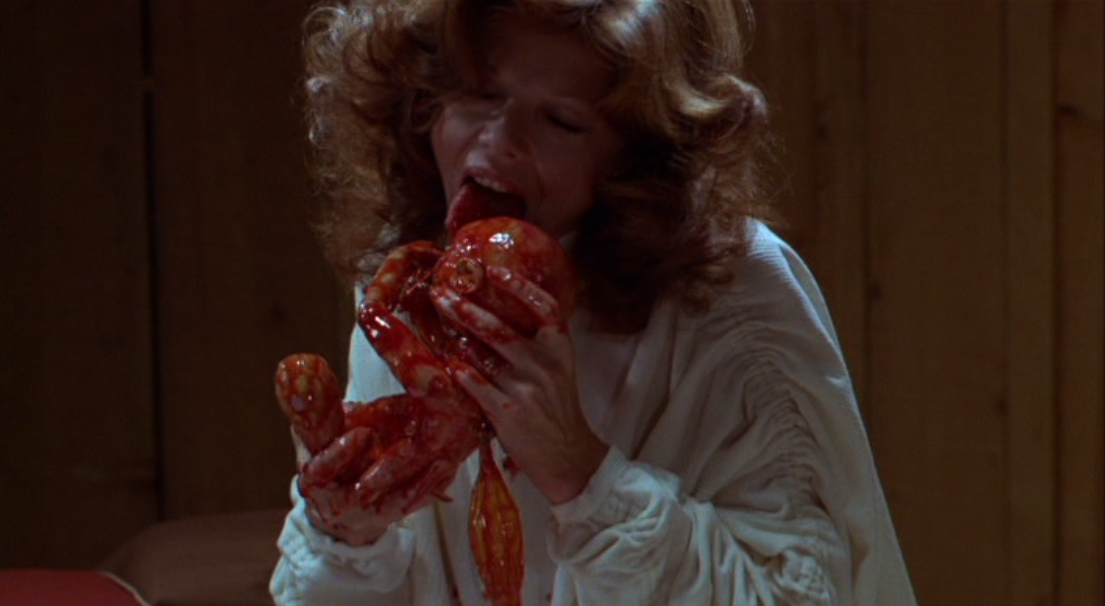 3. The Brood (1979) Alongside Shivers and Rabid, 1979's The Brood completes Cronenberg's unofficial trilogy of rough, messy, idea-driven body horror. A man (Art Hindle) going through a difficult custody battle with his mentally unstable wife (Samantha Eggar) gets wrapped in a series of murders that appear to be committed by children, but the real answer to what's going on is much, much darker. Oliver Reed co-stars as Eggar's psychotherapist. This is an angry horror film written by Cronenberg while he dealt with his own divorce and custody battle, and the bitterness makes its way to the screen. At the same time, few genre filmmakers are better than Cronenberg at using horror to communicate complicated ideas, and this stands as one of his strongest early efforts in that regard. There are still many people who consider this Cronenberg's best film. I'm not among them, but I will acknowledge that the movie is effective (if crude) and probably the director's most deeply personal film.

4. Scanners (1981) This one feels like Cronenberg's first "studio" movie, even though it was still essentially an independent put out by New World Pictures. Maybe it's because the craziness and the sexuality feel like they've been dialed way back; aside from the (justifiably) legendary opening sequence, the rest of the movie is pretty tame compared to his other films. As such, it straddles the line between what he had made before and what was still to come. There's great stuff in the movie -- the central idea is a good one, Michael Ironside is great as the villainous Darryl Revok and, of course, the head explosion has cemented Scanners' legacy even if the rest of the film was terrible. It's not, but it feel compromised by some sketchy acting from leading man Stephen Lack, who Cronenberg cast for his incredible eyes. He later essentially admitted that he regretted the casting and that Lack wasn't up to the demands of carrying the movie.

5. Videodrome (1983) Here's where the next phase of Cronenberg's career really begins, as he starts working with movie stars inside the studio system but manages to retain his uniqueness and voice. Nestled between Scanners and The Dead Zone -- arguably two of his most mainstream movies -- is Videodrome, released by Universal and starring James Woods and Debbie Harry. How this one got past someone at a major studio I will never understand, but I'm so glad it did. Woods is a producer for a pirate TV station who learns about a new show called "Videodrome" that has...interesting mental and physical effects on its viewers. James Woods is his usual slimy, incredible self, the gore effects are imaginative (and then some) and expertly executed by Rick Baker and its ideas about television and media aren't just prescient -- they're incendiary. Though it's probably one of his least accessible films, this remains my favorite of Cronenberg's work. 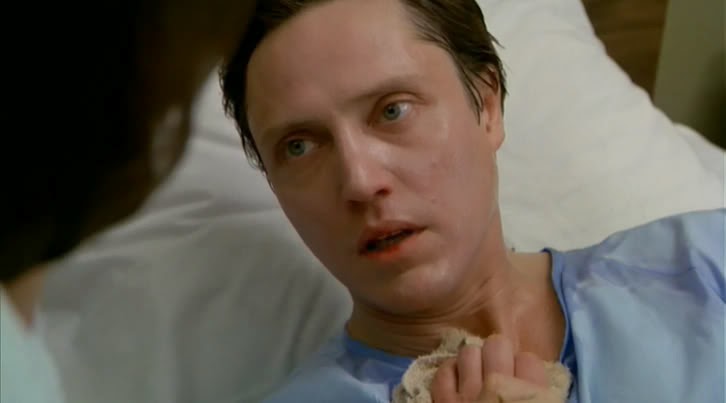 6. The Dead Zone (1983) Following his hardest-edged film with the softest, Cronenberg directed this Stephen King adaptation that's much more a supernatural drama than it is a horror film. A wonderful Christopher Walken (nothing like the parody of himself he has become, mostly because of all the parodies of him) plays Johnny, a school teacher who can see into the future after waking from a coma. The success of The Dead Zone -- and it's a very good movie -- reveals the secret to Cronenberg's greatness. For all his cold distance and cerebral approach to storytelling, he knows how to make us invest in his characters. That's hardly ever more true than in The Dead Zone (he would outdo himself with the next movie, hence the qualifier), which gets us to care about Johnny Smith  so much that it's his character -- not the paranoid political subplot -- that carries the film. There's very little of what we associate with Cronenberg on display, but it's one of the better adaptations of a Stephen King novel and evidence that Cronenberg could have had a very good director-for-hire career had that been the path he chose to follow. Me and my stomach vagina are glad he didn't.

7. The Fly (1986) There's an old interview with Quentin Tarantino where he talks about how Brian De Palma's The Untouchables was the movie that finally married De Palma's aesthetic with a much more commercial, audience-friendly aesthetic. He might as well have been talking about Cronenberg's remake of The Fly, which updates what was a relatively silly sci-fi horror film from the '50s and turns it into a powerful and intense statement about disease and decay; many have read it as an AIDS metaphor given the period in which it was released. More importantly, though, is that the movie is a truly great love story between eccentric scientist Seth Brundle and reporter Veronica Quaife (Jeff Goldblum and Geena Davis, then a real-life couple giving what is, for my money, the two best performances of their careers) that becomes operatic tragedy once Seth begins transforming into a fly. Amazing practical effects, a wonderful Howard Shore score, brilliant acting and the best directing Cronenberg has ever done add up to what could be argued as the best horror remake of all time (I would accept this or John Carpenter's The Thing). One of the best horror films of the '80s. 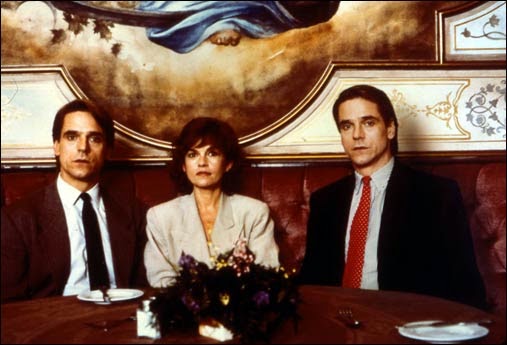 8. Dead Ringers (1988) Cronenberg closed out the '80s -- his strongest decade as a filmmaker -- with the movie that cemented his reputation among those mostly unfamiliar with his work. When we talk about his movies being cold and distant and twisted in a psychosexual body-horror way, we're talking about Dead Ringers. And it is a cold movie, which is fascinating as it comes on the heels of his warmest, most humane film. Jeremy Irons plays twin gynecologists whose lives are thrown into disarray when they meet a woman (Geneviève Bujold) who comes between them. This is a dark, uncomfortable movie, but also a brilliant one. It would set the tone for the next 10 years of Cronenberg's work, which became more academic and obtuse than it was before this.

9. Naked Lunch (1991) I've seen Naked Lunch a number of times and still can't decide how I feel about it. Like Terry Gilliam directing Fear and Loathing in Las Vegas, it seems like the perfect marriage between a distinct, singular auteur and an unfilmable book. In practice, it's a lot harder to wrap one's head around. The Cronenberg-scripted adaptation of William S. Burroughs novel also draws upon other works by the author as well as his actual biography, making it a mix of fictions that would make Charlie Kaufman proud. It's a movie I find fascinating even though I have a hard time liking it, but I admire the fact that it's a movie only Cronenberg could make. Hell, it's a movie only Cronenberg would attempt. 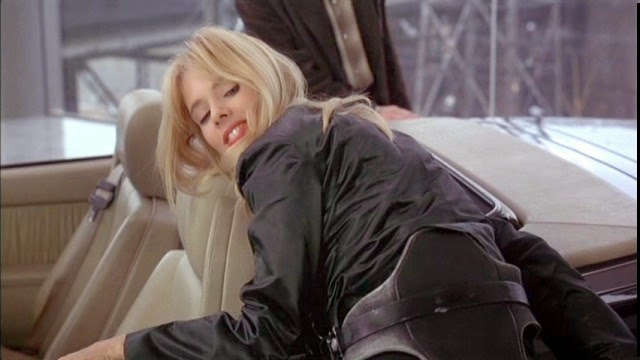 11. A History of Violence (2005) And with this, Cronenberg moves into the fourth stage of his career, away from horror and the genre-bending clinical period of the '90s and towards crime thrillers and psychological dramas. The best of them is 2005's A History of Violence, based on the 1997 graphic novel by Vince Locke and John Wagner, which casts Viggo Mortensen as a small-town diner owner who may or may not have a criminal past that comes back to visit him in the form of Ed Harris and a whole group of bad guys. Cronenberg has always been good at exploring the psychology of his characters (even when, as in the case of Crash or Naked Lunch, it was completely alien to us), and here infuses what would have otherwise been a standard thriller with a fascination in what makes people live the lives they do. There's some of the brutal gore we've come to expect, but otherwise this feels like a departure in a lot of ways; even the sexuality feels warm and healthy...for part of the movie, at least.

I fear the Cronenberg I fell in love with might be gone forever, but I'll take this one if I have to. 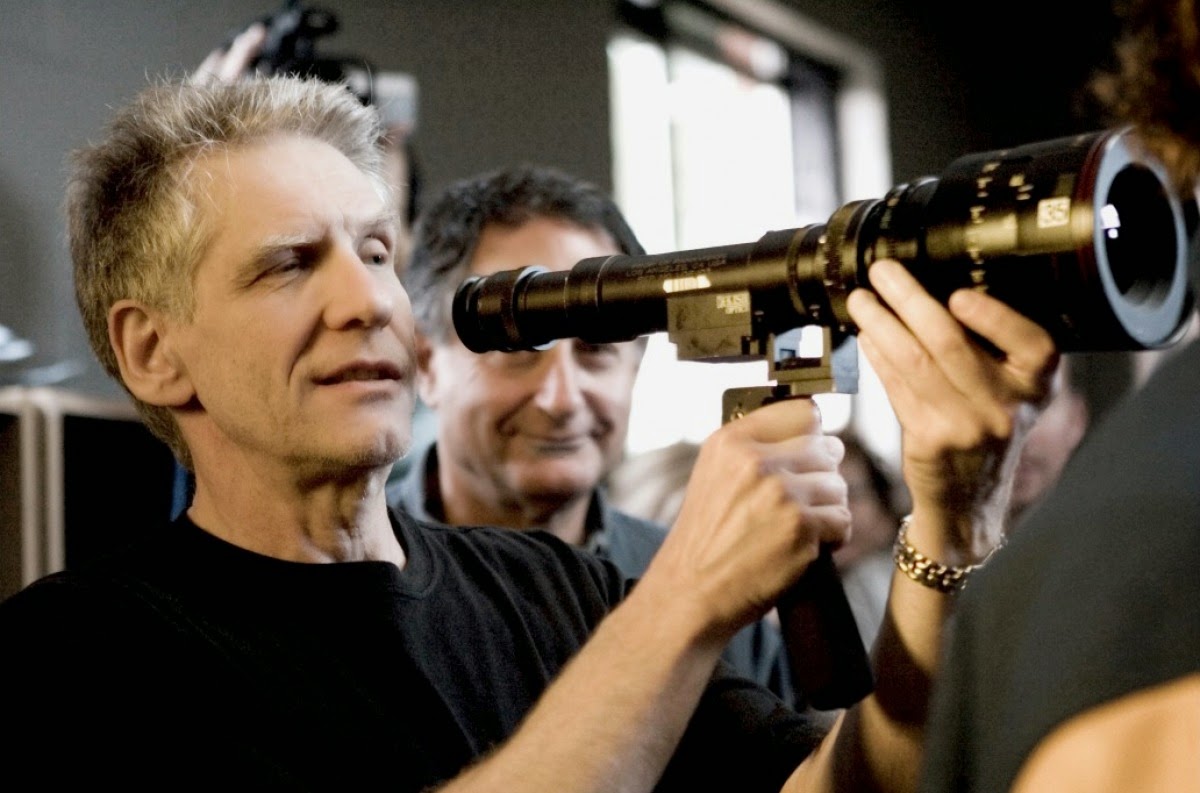