It's Friday the 13th! Jason spares teenagers who stream these movies. 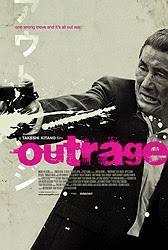 Adam Riske: Outrage (2010, dir. Takeshi Katano) Takeshi Katano's Outrage is a movie I watched on a lark a few years ago and remember being a lot of fun. It's super violent (appropriate for a movie about an all out war between Yakuza factions) and nuts, with some of the most brutal kills I've ever seen in a movie. If you're into this kind of thing, it's a fine example of this specific subgenre. I don't know why anyone would want to be in the Yakuza. Talk about a stressful life. 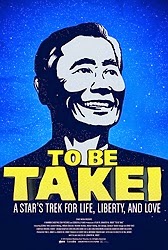 Adam Thas: To Be Takei (2014, dir. Jennifer M. Kroot) I don’t’ think it’s possible to find a more loveable pair than George and Brad Takei. I kind of just want to hug them both. To Be Takei is a two hour bio-documentary following Captain Sulu of the USS Excelsior...okay that was a little bit too nerdy. It follows George Takei: Japanese American, Gay Rights Advocate, Actor, Politician, Radio Personality, Overall Nice Guy, and his husband Brad. Even being a Star Trek fan, the first time I really remember knowing George Takei was after a legendary prank call on the Howard Stern Show. The prank call became so popular that George did what may be one of the greatest interviews in history on the show in which he “came out.” In one swoop, Takei endeared himself to millions of Stern fans and has seen his celebrity climb in a time when most actors are “hanging it up.” To Be Takei is a few steps above a reality TV show, because while it shows the everyday life of George and Brad, it also takes time to explore his history, as well as include some wonderful interviews. Whether you are for or against gay marriage, it is a fascinating documentary about the struggles and successes of a gay minority in the United States that makes me hope the twilight of my life could be as successful and fulfilling as George Takei’s. 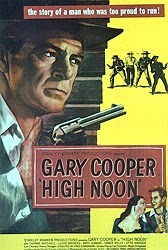 Heath Holland: High Noon (1952, dir. Fred Zinnemann) It's been over three years since JB published a column featuring 160 essential films, but I still reference it and check things off my own personal watch list. His list of must-watch movies is filled with classics that I've known about for years and years, but never got around to watching because I was busy with movies like I'll Always Know What You Did Last Summer. It took me a couple of years to get around to High Noon, but it definitely lives up to expectations. Just in case you were like me and never got around to checking out it out, here's the details: High Noon stars Gary Cooper as a marshal who has just been married and has plans of retiring his post and settling down with his new wife, played by Grace Kelly. A murderous gang bent on destruction (and with the worst timing ever) rides into town, and Cooper appeals to the people who live there to defend themselves. When they all turn their back on him, Cooper must decide if he's going to leave town and enjoy the quiet life or if he's going to stay and fight the marauders alone. The story is an archetype now, but it feels fresh and masterfully done here; the cinematography is fantastic and the score by Dimitri Tiomkin is startling in its then-unconventional approach. It hasn't been all that long since I watched it, but It feels like I've known High Noon forever. It's one of those films that reminds me why I love movies in the first place. 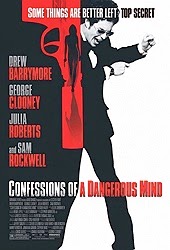 JB: Confessions of a Dangerous Mind (2002, dir. George Clooney) I have been championing this little film for a long time. Back in 2012, I wrote, "At its best, [Confessions] strikes a mood that too few other films successfully convey: the dark night of the soul, the violent ennui that many of us experience at some stage in life. The opening and closing sequences of Apocalypse Now, Ben hiding in the basement in Night of the Living Dead, and Harvey Keitel’s slow hooker dance to “Pledging My Love” in Bad Lieutenant are a few other examples of scenes where the director, director of photography, scriptwriter, and actor conspire to strike [this same disturbing] tone. Confessions of a Dangerous Mind explores that dark, complicated mood from beginning to end...

Confessions of a Dangerous Mind is the motion picture trifecta: it is at once a successful dark comedy, an eerily accurate recreation of a specific moment in American history, and a suspenseful Cold War spy film." Watch it (again) this weekend! 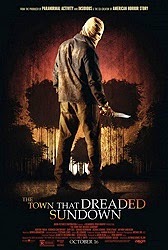 Patrick: The Town That Dreaded Sundown (2014, dir. Alfonso Gomez-Rejon) The better-than-average remake of the 1976 movie was unceremoniously dumped to VOD last October despite being produced by Jason Blum and the otherwise-terrible Ryan Murphy (of American Horror Story and Glee). It deserved better. I reviewed it back then and found it far from perfect, but interesting and sometimes scary and stylish as hell -- one could argue too stylish, as director Gomez-Rejon never stops moving and spinning the camera. The "meta" approach the remake take doesn't quite pay off and the third act disappoints, but it's slick and entertaining in a way that many modern horror remakes aren't. For the nothing you'll pay for it, the movie won't let you down.
Posted by Patrick Bromley at 10:00 AM

Email ThisBlogThis!Share to TwitterShare to FacebookShare to Pinterest
Labels: confessions of a dangerous mind, high noon, netflix instant, netflix this movie, outrage, takeshi katano, the town that dreaded sundown, to be takei