A bunch of new movies were recently added to Netflix. We've picked a few that you should see. 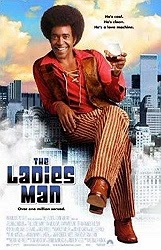 Adam Thas: The Ladies Man (2000, dir. Reginald Hudlin) The beautiful thing about Netflix is that when you’re only paying the price of burger and fries per month, it allows you to check out some movies you wouldn’t usually visit, or in this case re-visit. You all know The Ladies Man, another low budget comedy based off of a popular SNL character. When I first saw the movie in 2000, I hated it, mostly because I think my expectations were rather high. The other day I decided to put it on again and was pleasantly surprised. The movie is fun, very self-aware, and was a lot more enjoyable experience than I recalled. Everyone in the movie does their part, and there are a lot more jokes that I can appreciate now more than I did when I was 20. You have to be in the right place to watch The Ladies Man, but I hope that a few of you give it another chance because while it’s far from a great movie, it’s a lot more fun than I originally gave it credit for being. 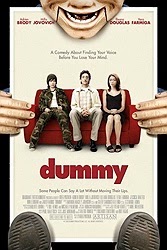 Heath Holland: Dummy (2002, dir. Greg Pritkin) Dummy stars Adrian Brody as a socially awkward guy who has trouble communicating with just about everyone except his foul-mouthed, punk-loving best friend, played by Milla Jovovich, who spends most of the movie pretending to not be beautiful. Brody's character discovers that he's less awkward around other people when he picks up a ventriloquist dummy, and he feels like his new hobby could be the key to overcoming his shyness and perhaps even finding romance. Illeana Douglas, Vera Farmiga, and Jared Harris turn in good supporting performances in a movie that is absolutely as bizarre and uncomfortable as it sounds. Writer/Director Greg Pritkin doesn't play the premise for big laughs, preferring to go the sweet, sentimental route. Some of it works and a good portion of it doesn't; still, I give Pritkin a lot of credit for not making the movie that you would expect based on the premise, and doing something sincere instead. In several ways, I think Dummy is a predecessor to 2007's Lars and the Real Girl. 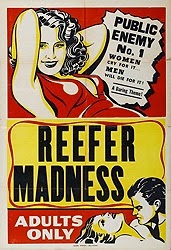 JB: Reefer Madness (AKA Tell Your Children) (1936, dir. Louis J. Gasnier) I love every minute of this barely feature-length, hysterical “expose” of the brisk trade in dirty reefers in Anytown, USA. I love how the actors have been directed to smoke like a cross between a fireplace bellows and an industrial smokestack, just so it would show up on film. I love how Ralph Wiley (one-time MGM stock player Dave O’Brien) wants his gal to play the piano faster, FASTER, whenever he is stoned. I love how you can never tell if the narrator and judge are looking at the other characters in the scene or if they are looking at YOU. (Maybe I’m just paranoid.) I love how the film gives we Americans a simple choice: the straight and narrow and a normal life -- or a life beset by reefers, murder, suicide, and insanity. The choice is yours, gentle readers. 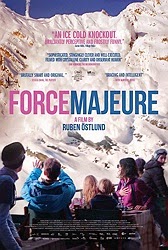 Patrick: Force Majeure (2014, dir. Ruben Östlund) This Swedish film about a single incident during a ski vacation that threatens to destroy a family cleaned up on last year's top 10 lists, then surprised everyone (including the filmmakers) by failing to score even a nomination for Best Foreign Language Film at this year's Oscars. The amount of praise may have been a bit much, but it's still a terrific movie: funny, surprising, tense, uncomfortable and even moving at times. As a piece of filmmaking, it's particularly impressive -- long takes that convey huge amounts of story with mostly framing and movement, plus a tricky tone that's expertly balanced. If you haven't already seen it, the movie is very much worth your time. Watch it with a loved one and enjoy the awkward conversations you'll be having for the rest of the weekend. It definitely should have at least been nominated for an Oscar, even though Ida still should have won.

Or if you really want to ruin your weekend, you can watch Not Cool, which was just added to Netflix Instant. It's the first movie directed by YouTube "star" Shane Dawson and was one of two movies featured on the Starz series The Chair. It was the worst movie I saw last year. I would challenge anyone to make it thorough 15 minutes, but those minutes are better spent watching any of the other movies on this list (or the 120 previous Netflix This Movie! columns). Fuck you forever, Shane Dawson.
Posted by Patrick Bromley at 12:00 PM