Spring has sprung, and with it these Netflix streaming suggestions. 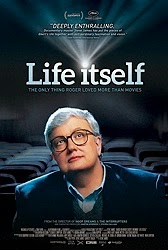 Adam Riske: Life Itself (2014, dir. Steve James) Isn’t it wonderful that a man who spent his life loving great movies is, in the end, the subject of one himself? Steve James’ funny and moving documentary encompassing the life and death of film critic Roger Ebert beautifully captures the spirit of Ebert’s personable and enlightening blog posts, columns and reviews. Life Itself could have very easily been a puff piece, but instead it’s a beautiful movie about love and friendship when confronting death and the virtues of a life lived well. Roger Ebert called the movies “a machine that generates empathy,” and by the end of Life Itself you will no doubt feel as if you understand Ebert, the man and the celebrity. A fantastic screen biography. 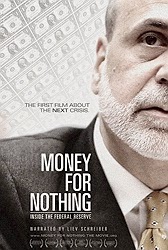 Adam Thas: Money for Nothing: Inside the Federal Reserve (2013, dir. Jim Bruce) I’m a big fan of movies that make me feel smarter. After the disastrous collapse of the world economy in 2008, we seem to have had a steady stream of documentaries that break down what exactly happened. Some of them are incredible (Inside Job), but many of them just repeat the same things over and over with a variable degree of blame. Money for Nothing is the first one I’ve seen that really doesn’t take sides and goes back as far as the early 1900s in explaining all the factors in the collapse. Most importantly, it looks at the role the Federal Reserve has played in not only lifting our economy, but its participation in the disaster as well. It takes extreme lengths to break down the economics of it and its relation to the Federal Reserve system, explaining it in a way that never felt like it was talking down to anyone who isn’t an economics major. I know the idea of spending two hours watching a movie about history and economics seems incredibly boring, but I was happy I gave it a chance. 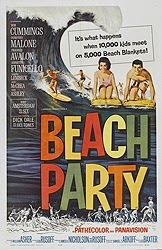 Heath Holland: Beach Party (1963, dir. William Asher) I've been watching every beach movie I can get my hands on, including the movie that serves as a predecessor to American International's cycle, 1959's surf film Gidget. It's amazing to see how drastically the movie teenager changed in the four years between Gidget and Beach Party: this 1963 film shows us teens drinking and dancing, fighting, fooling around, and showing plenty of skin, all without a competent adult in sight. No wonder this AIP exploitation film was so popular with young audiences and spawned six sequels (and many more imitators). Often accused of being quaint and dated, I actually think these movies are incredibly refreshing and vital, like a tonic for the doldrums; this one has great music by Dick Dale, plenty of warm sun and sand, and a cameo by the king of horror himself. You can watch this movie and then read Patrick's reviews of two of the sequels that just hit Blu-ray. Is it summer yet? 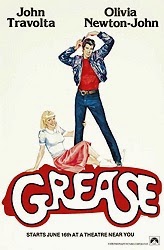 JB: Grease (1978, dir. Randall Kleiser) This is a film that should not work, but does. I love how all the teenagers are played by thirty year-olds. I love the way John Travolta dances and how, in this movie, he is wearing his real hair. I love the rogue’s gallery of authentic 1950s television personalities taken out of mothballs to play cameo roles: Eve Arden, Sid Caesar, Edd “Kookie” Byrnes, Frankie Avalon, Joan Blondell, Alice Ghostley, Dody Goodman, and Fannie Flagg. I love how back in 1978, the folks at the MPAA did not really listen to the songs because they gave a film a PG rating with lyrics like “You know that it ain’t sh*t, we’ll be getting’ lots of t*t” and “You know that I ain’t braggin’, she’s a real p***y wagon.” I have been told those lyrics have since been changed in the stage version, the biggest audience for which is now pre-teen girls.

You can even play a fun game and pretend you are in the original movie audience back in 1978! When Olivia Newton John goes into that backyard to sing “Hopelessly Devoted To You,” get up, take a break, go to the bathroom, or get a snack.

This is your chance to relive the 1950s, seen through the warped lens of the 1970s, and all in the comfort of your own home or refrigerator box in the early 21st century. Just the thought gives me chills, and they’re multiplying. 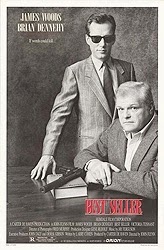 Patrick: Best Seller (1987, dir. John Flynn) This was just released on Blu-ray earlier this week from Olive Films (you can read my review of it here). It's good! I already said everything I have to say about it, so I'll just reiterate that if you're a fan of either of the two stars -- and you really should be -- this one is worth your two hours.
Posted by Patrick Bromley at 12:00 PM

Email ThisBlogThis!Share to TwitterShare to FacebookShare to Pinterest
Labels: beach party, life itself, money for nothing, netflix instant, netflix this movie, roger ebert