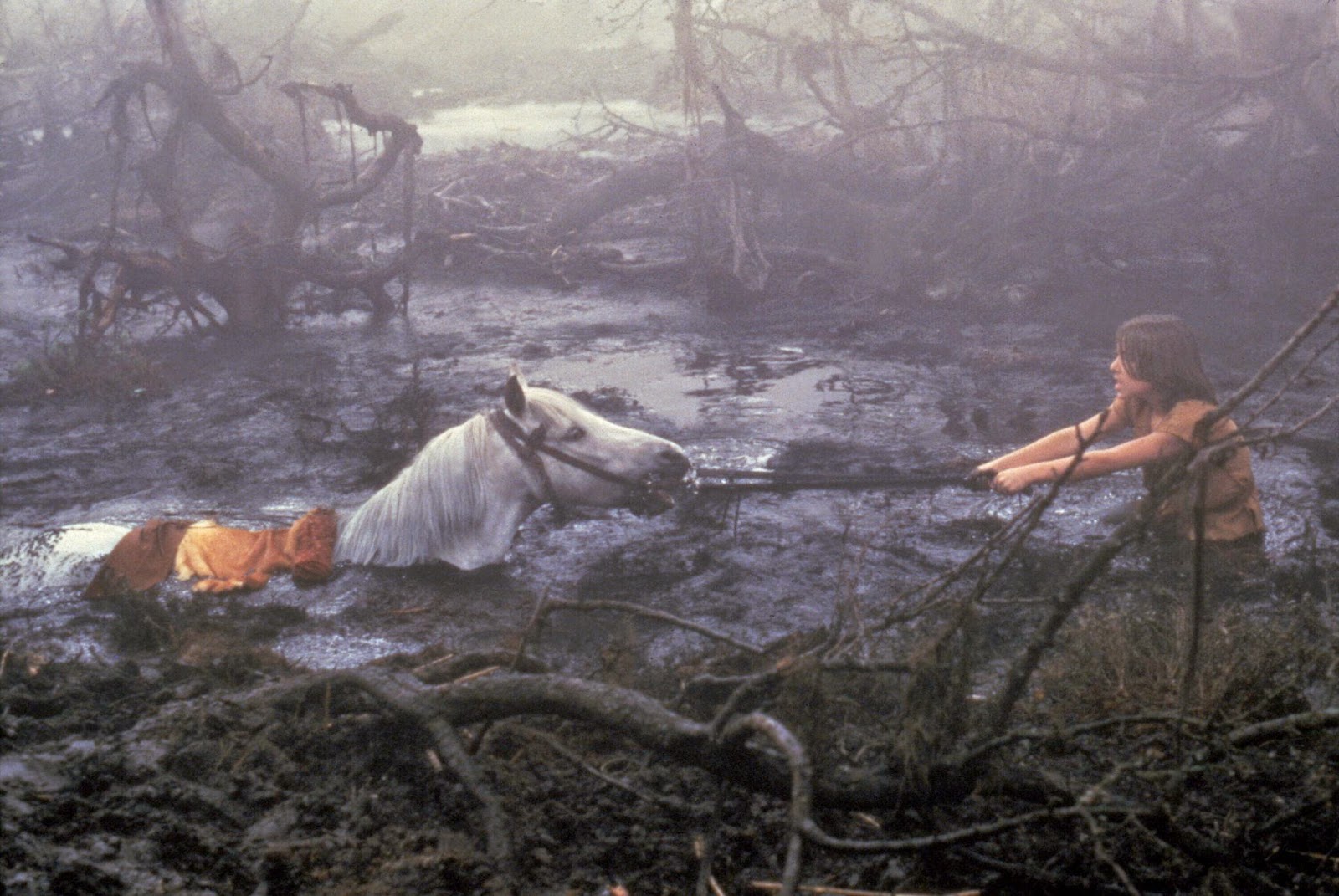 Twenty-five years is a hell of a long time to hold a grudge.

Even for a girl -- and speaking on behalf of all girls -- we are pretty damn good at holding grudges. This year marks the year I have decided to become a better me, letting go of old hates and giving the nightmare-inducing creatures that have haunted me for DECADES another chance. So after quite of a bit of coaxing from my husband, we decided to do a mini-marathon of the main movies from my childhood that I cringe at the very thought of now.

I feel I have repeatedly spoken of my love of all things horror, and I find it so odd that I find myself craving blood, guts and gore entertainment, while these beloved children's movies have instilled such revulsion in me at their very thought. Just try and convince me that the three foot tall, wrinkled naked alien trying to phone home is adorable and I would promise vomit and a punch in the face. (Unless it's my mom. Never punch your mom in the face.)

Ahem. First up: E.T The Extra-Terrestrial, (1982). Yep, for over 25 years I have hated the very thought of this repulsive alien. I have no idea where people's thinking of it as a cute creature comes from. Give me a break. Its disgustingly long fingers, glowing red heart, creepy eyes, its scream and voice do nothing but curdle my blood...and don't even get me started on how gross it becomes as it begins to die. Ew Ew freakin' EW. 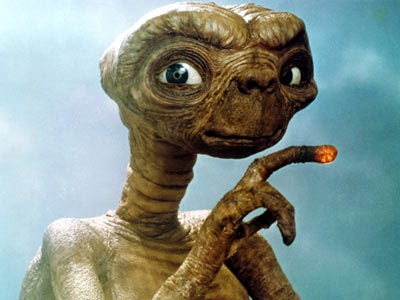 I had dismissed the film for years based on my revulsion of the critter at its centre but this is about me getting over myself and giving things I hate another chance. So this was at the top of the list. We watched it, it won me over and I loved the movie. As Roger Ebert puts it: “This is not simply a good movie. It is one of those movies that brush away our cautions and win our hearts.” And win my heart the movie did! But I just couldn't find it in me to see E.T. as anything but a repulsive alien. A couple years ago I watched an alternative trailer for E.T. that someone with a lot of time on their hands had created in the style of a straight-up horror. For me, it depicts E.T. much more accurately than as the forgotten little creature trying to get home so many people know and love. In actuality it's a closet lurking monster, waiting to run at you with its glowing red finger. Phone home? BAH! A likely story. More like call in reinforcements to take over the planet.

Mac And Me (1988), directed by Stewart Raffil,l was also on the list to re-watch, but I got sidetracked after the first four films and have not yet gotten around to it. From what I remember, it's basically an E.T. rip-off with some creepy-ass, skinny naked aliens wandering around sucking water through straws. Also, I'm fairly certain the water was a hallucinogenic drug to them. Check out the pupil dilation on this freak -- he looks good n' ripped! 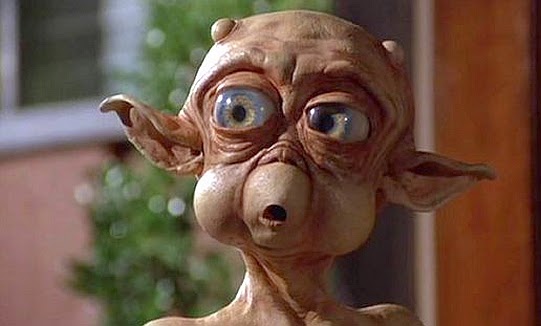 About 95% of the people I spoken with about this movie had never even heard of it, but I'm sure several of you have. And it's most likely not worth wasting the hour and half is my best guess?

As I was compiling my list of movies to suffer through for this piece, the one I was least excited to revisit was Wolfgang Peterson's The NeverEnding Story (1984). Turns out me and sci-fi/fantasy from the '80s do not necessarily see eye to eye. Or eye to creepy luckdragon/scaled dog, giant sneezing tortoise or depressed gigantic rock creature. UGH. I'm not even sure how this could have technically even qualified as a children's movie. I mean, join us on an adventure if you will, where the main character's horse dies a slow and gruesome sinking death (holy hell did I let loose some almost embarrassing boo-hooing at that), and for the remainder of the story he is pursued by a genuinely scary werewolf who is out to kill him, if the rest of the world doesn't do it first. WTF? This movie I did not like. And to hell with giving it another chance. I feel I have wasted too much time on it already. Am I missing something here? 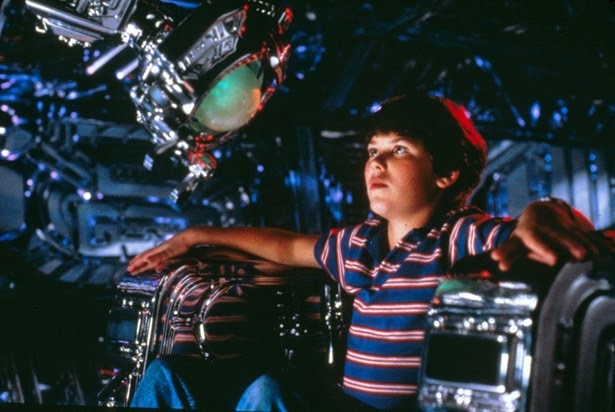 My memories of Flight of the Navigator (1986 dir. by Randal Kleiser) were hazy at best, but again it had left me with a haunted feeling of disgust. (I'm beginning to think that kid-me had a hate on for all things muppet-like?) To my best recollections, this kid flew around in a spaceship that laughed like Pee-wee Herman and collected gross creatures from around the universe, sang along to music from the Beach Boys, annnnd, oh yeah he had a dick brother. HAHA Nailed it! Paul Reubens voices Max, the periscope-like alien pilot of a vessel that collects young David for study and transports him eight years into the future, unable to safely return him to his own time. The more I watched, the more I wondered why I had not enjoyed this as a kid! Yeah, there's a brief glimpse of some gross creatures from other worlds, but c'mon, I used to watch Sesame Street and none of those muppets haunt my dreams! Verdict: Loved it!

And at the end of our short marathon, I opted for a movie I remembered enjoying, yet left an odd taste in my mouth. It must have been the blue, red and yellow full body fur on Jeff Goldblum, Damon Wayans and Jim Carrey. What the sweet hell am I referring to? Julien Temple's Earth Girls Are Easy (1988) is not only a science fiction musical set in the not too distant future, but shows that if you use lots of Nair, you can transform aliens into hot dudes. True story. And how I could have possibly forgotten that the entire movie is a freakin' musical is beyond me. Oddly enough I was able to sing along to some of the songs when they came on though. HAHA My husband is a great man to put up with me. “Cause I'm a blonde, Yeah Yeah YEAH!” 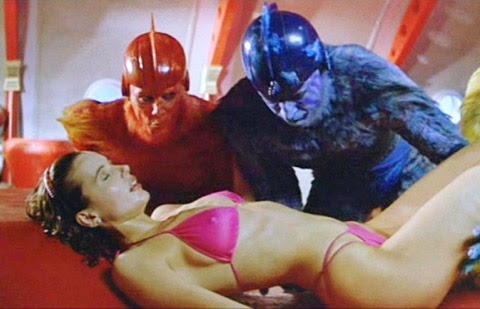 It had been so long since I had watched any of these, yet I had obviously watched them on repeat as a child that for the most part as each scene in the films progressed I found I knew exactly how each would play out just seconds before it did. Over the years I had built up an image of each of these movies in my mind, so much so that it seemed preposterous that kid-me could have liked them at all. Having re-watched these as an adult, I feel I have pushed aside the built-up, almost cloaked nature of compounded creepiness, have rediscovered a newfound affection for a couple '80s classics and have decided to make it my life mission to ensure everyone watches Earth Girls Are Easy. Because who doesn't love a sci-fi musical? ....Most people is my guess. But you need to experience it to believe it even exists!
Posted by Patrick Bromley at 12:00 PM