Off the Shelf: Bio-Dome (Blu-ray) 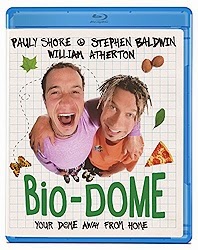 The last Pauly Shore movie to get a wide theatrical release is the first to arrive on Blu-ray.

The film career of stand-up comedian and MTV personality Pauly Shore burned briefly but brightly. After reinventing himself as a sort of horny, non-threatening hippie goofball comic and star of his own MTV show, Totally Pauly, in the early '90s, Shore made the leap to film as Sean Astin's sidekick in the caveman comedy Encino Man in 1992. Over the next four years, Shore averaged one starring vehicle a year: Son-in-Law, In the Army Now, Jury Duty. A new Pauly Shore movie became as dependable as the changing of the seasons, but provided diminishing returns. He peaked at Son-in-Law, the least bad of his movies, and by 1996 Hollywood was already showing him the door. Though he would continue to play supporting roles in projects and make his own independent films, Bio-Dome is the death rattle of his theatrical career.

Bio-Dome has a number of distinctions to its name. It is the lowest-grossing Pauly Shore comedy to be released in theaters. It is the first Pauly Shore movie to co-star Stephen Baldwin, an actor destined to be remembered more for his political and religious views than for any particular talent. It features one of the earliest performances by Rose McGowan, as well as the first time folk-trash duo Tenacious D showed up in a movie (ten years later, they would be headlining their own feature). Its villain is played by William Atherton, who turned down the Michael Rooker role in Mallrats because the movie was too juvenile or stupid and then agreed to be in Bio-Dome less than a year later. It stars Joey Lauren Adams, who was in Mallrats. There are a few Mallrats connections is what I'm getting at. 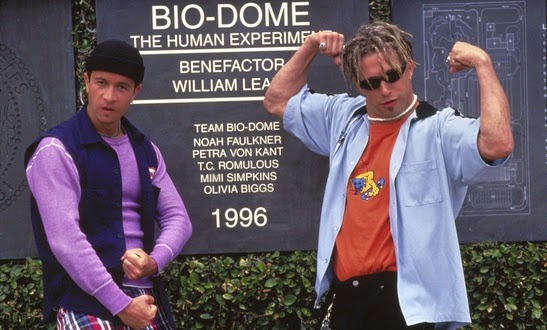 Shore and Baldwin play Bud and Doyle, respectively, two slacker best friends whose environmentalist girlfriends (Teresa Hill and Joey Lauren Adams) are fed up with their lack of motivation and their inability to take anything seriously. Women, right? Always be nagging. The girls play a prank on the boys and invite them to a fake party; en route, Bud and Doyle make a pit stop to pee and end up inside a massive science experiment called the Bio-Dome, an indoor environment designed to house a team of scientists for a year. What a wacky misunderstanding! These buttoned-up scientists couldn't be more different from the party-hard approach to life of Bud and Doyle, so you can imagine there are laughs galore! They're going to butt heads with the Bio-Dome's lead scientist, Dr. Noah Faulkner (Atherton). They're going to hit on some hot scientists played by Kylie Minogue and Dara Tomanovich. Any maybe -- just maybe -- they'll learn a little something about being responsible and what it means to grow up!

Bio-Dome is a profoundly unfunny movie. I would suggest that this is because the jokes don't work, but I'm really not sure there are jokes. Maybe the central conceit is funny -- that the two main characters don't take science seriously. It's about time someone stuck it to those bookworms, right? I would be hard pressed to determine what the actual jokes are. There is a scene in which Stephen Baldwin is trying to keep the other scientists inside the Bio-Dome so he swallows the key to get out (because a billion dollar scientific operation is at the mercy of a hardware store key). One of the scientists insists he return the key, so he turns around as if he is going to poo it out. That is the joke. That he might poo. He doesn't of course, so we are asked to laugh at the sight of his butt pressed up against some glass, not pooing. 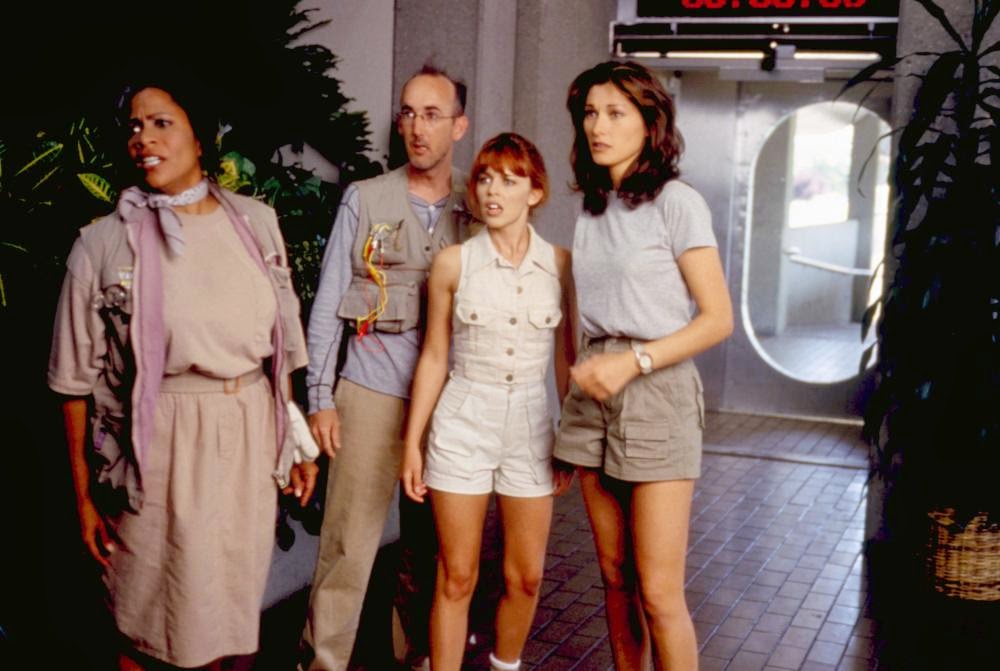 Shore's appeal as a leading man is...limited. He plays variations on the exact same character in every film -- a screwup who is immature, undependable and possibly high a lot, though there's very little explicit drug content in any of his movies. One need look no further than the names of the characters he played in his movies to understand what his onscreen persona was: Stoney, Crawl, Bones and Bud. I mean, the rest just writes itself. I don't know if it's a deliberate acting choice or if he had just given up by this point, but Shore giggles and half-asses his way through the entirety of Bio-Dome -- it's a movie so lame even he can't commit to it. Stephen Baldwin, on the other hand, practically barfs up a lung he's trying so hard to be "funny." Though he's not far from the age he's playing and is capable of appearing dumb on screen, everything about Baldwin's desperate performance smacks of someone's dad putting on "cool" clothes and doing an impression of how he thinks young people act.

Bio-Dome is also one of the most aggressively mid-'90s artifacts ever created, from the clothing to the lame power punk that makes up the soundtrack to the constant appearance of Joey Lauren Adams' midriff. Director Jason Bloom's greatest influences appear to be Slim Jim commercials and Mountain Dew commercials. There's some almost offensive about certain studio comedies of the '90s, which seem to think that the audience at which they are targeted will be happy with a bunch of "attitude." They are Poochie movies. 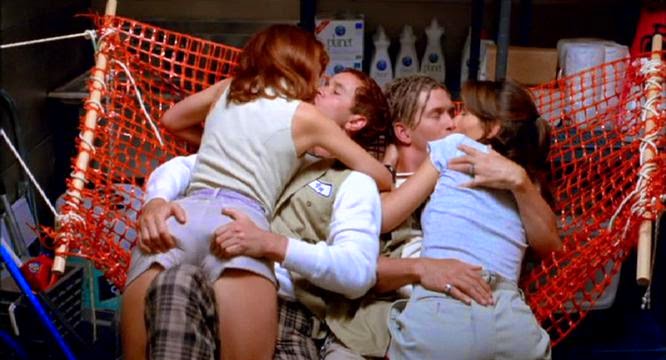 Most Pauly Shore movies weren't all that funny when they came out in the '90s, but have become even less funny with age. The good news -- what there is, anyway -- is that the movie looks great on Olive Films' Blu-ray. It's bright and colorful and free from any signs of age or debris. If you're a fan, your weird prayers have been answered. The rest of us will have to stick to catching a few minutes of Son-in-Law every few years on TBS, mostly just to catch a glimpse of Carla Gugino.