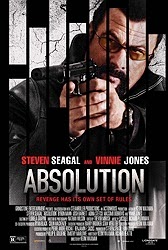 I still haven't written much about DTV action in my #HeavyAction columns for a couple of reasons, chief among them that it opens the door to a whole lot of garbage and I'm not ready for these to turn so negative. Yes, there are a handful of really good DTV movies that I would love to champion, but once that finite list dries up it's going to be nothing but crap directed by Keoni Waxman, shot in Eastern Europe and co-starring Vinnie Jones. And we can't have that.

But here's Absolution, directed by Keoni Waxman, shot in Eastern Europe and co-starring Vinnie Jones. It's not technically a Direct-to-Video effort, because it is getting a very limited theatrical release. It's actually playing at my local multiplex; had I gone to see it there, this would have been the first Seagal movie I saw theatrically since Exit Wounds 14 years and 29 movies ago (not counting Machete, which I did see in a theater but don't really consider a Steven Seagal vehicle). But time is precious and VOD is convenient at 11 p.m. on a Friday night, so I took in the latest Seagal at home. This is not a movie that would benefit from the big screen experience. 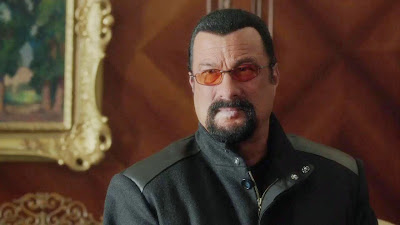 Seagal plays John Alexander, an assassin hired by a shadowy arm of the government to take out an arms dealer. While carrying out the mission, Alexander and his partner Chi (Byron Mann, Ryu from Street Fighter) find a frightened woman on the run from a sadistic crime boss (Vinnie Jones). Alexander vows to find and kill the Boss, setting the rest of the film's plot in motion.

Here's something interesting I did not even realize while watching Absolution (already on DVD and Blu-ray in the UK under the title The Mercenary: Absolution): it's actually the third film in a series. It is the sequel to last year's A Good Man, itself a prequel to 2013's Force of Execution. I guess that makes Absolution a prequel to Force of Execution as well? I can't quite keep the timelines straight.

How did I not know that this was actually Seagal's third outing as John Alexander, a covert government operative turned contract killer turned eventual crime lord? Because except for the fact that his name is the same, there is nothing to distinguish this Seagal from his last 10 years of work. He wears the tinted glasses and has the bad goatee. He wears the bulky overcoat to hold in his massive girth, like a sausage casing ready to burst. He whispers all of his dialogue in a vaguely Southern accent, which has been his default for the last decade (when he's not speaking in a  vaguely Russian accent, that is, as he definitely went through a Russian period). He even gets to hook up with a much younger Eastern European woman in the final scene, which has becoming something of a trademark of his 2000s work. Though the terrible dubbing and stunt doubling is kept to a minimum (for those who don't know, Seagal has a couple of DTV movies out there that appeared to have been only half finished with him still involved), he's a long way from the lightning-fast badass of his early films. These days, he's more like a grizzly bear with a handgun. But because so many of these things have been true of Seagal's movies for years, I had no clue that this one was in continuity with two others. 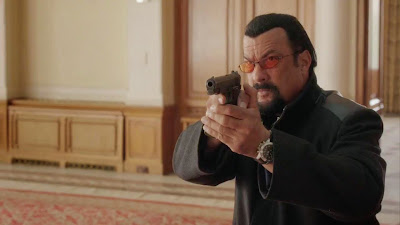 Truth be told, it doesn't need to be. Had his name been something else it wouldn't have made the slightest difference, as Seagal has been playing the same character for years now no matter what he's called. It's not a character I'm all that interested in either, despite the fact that it is, according to the standards laid out by original Seagalogist Outlaw Vern, one of the purest Seagal creations on film. I like Seagal better when he's looser, like in his Marked for Death/Out for Justice days, or when he stretches himself even a little as an actor, like in Pistol Whipped and Urban Justice, still two of his very best DTV efforts. At this point it's safe to assume that he's never going to be part of another great action scene and probably won't be starring in any really good movies, so the best we can hope for is that they might be different or interesting. Absolution is very much more of the same.

Having said that, it's at least decent more of the same. Keoni Waxman is a generic journeyman of a filmmaker -- his movies look and feel just like DTV action movies with no visual originality or cinematic sense. But he's inoffensively bland, and when you compare his collaborations with Seagal to, say, real dreck like Attack Force or Against the Dark, you really start to appreciate what Waxman brings to the party. There's a certain efficiency and nasty edge to the action that gives the movie some energy, and though the locations and the bad guys are all totally generic, Waxman doesn't just phone it in. It truly seems like he's directing to the edge of his abilities; it's just that he's not a great director, just a capable one.

This is also the second film in the John Alexander Chronicles (this is what I'm calling them) in which Seagal is shown up by his more charismatic, more badass co-star. In A Good Man it was Victor Webster, who really seemed like he should have been the star and is ready to carry his own action movie. Here it's Byron Mann, an actor with whom Seagal has worked twice before (in Belly of the Beast and A Dangerous Man). He's livelier and more spry and seems to be having a good time, less concerned than Seagal with always seeming like the toughest and the deepest. He's just there to fight and doesn't have to work so hard to be cool. He lets the cool come to him. While his (and previously Webster's) presence only serves to illuminate how insufferable Seagal has become in recent years -- even on screen, as we already knew he was insufferable off -- he at least gives us something to watch and enjoy. The movie is better for having him in it. 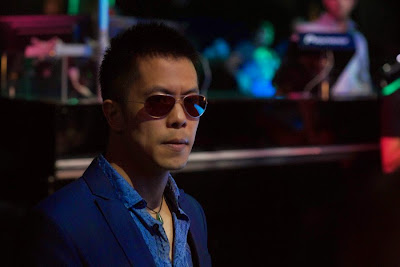 Absolution is pretty middle of the road in terms of Seagal's DTV output -- upper middle, if I'm being generous. It's light years better than a number of his films from the last 15 years, but never reaches the heights of his most inspired efforts. With Stallone content to coast on nostalgia and both Schwarzenegger and Van Damme doing more mature, interesting (if not always better) work these days, Seagal is the only one left of the Big Four still on a straight path doing exactly the same thing he has always done. I suppose there's a certain consistency in that, and his movies continue to do well enough in foreign markets to justify bankrolling the next one. But we're well past the point at which his films become indistinguishable from one another. The only thing left to do when a new Seagal movie comes out is see it and decide where it falls on the sliding scale of quality: do we breathe a sigh of relief because it's not that bad or do we add it to the junk pile? This one gets a stay of execution.

That reminds me -- how has there not yet been a Steven Seagal movie called Stay of Execution?