Off the Shelf: Satan's Blade (Blu-ray) 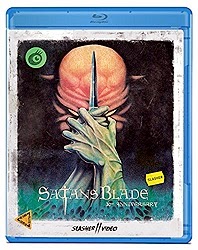 To the casual horror fan, the slasher movie boom of the early 1980s resulted in a series of Halloween rip-offs and Friday the 13th sequels. More advanced students of the genre can point to more esoteric titles like The Burning and Slaughter High and Killer Workout. Then there are those of us who have worked our way through that tier and are always looking for the next best unseen classic. That's where something like Satan's Blade comes in.

An ultra low-budget slasher shot in 1982 but not released until 1984, Satan's Blade finds the requisite group of young people heading into the mountains to spend some time at a ski resort, only to be picked off by a murderer of unknown motive and identity. There is a supernatural element at play, with one character becoming possessed by the spirit of a killer mountain man, but not so as you'd know it.

That's basically the gist of Satan's Blade, the only feature film credited to writer/director L. Scott Castillo Jr. It's easy to see why. This is a very crudely made film. The writing is shoddy. The acting rarely reaches the heights of early '80s porn. The kills are uninspired, executed with bad, cheap special effects. One scene halfway through features a boom mic visibly hanging over the actors' heads. None of it feels like the work of professionals -- yet another reminder that slasher films were so in demand in the early '80s that just about anyone could get one onto the shelves of video stores regardless of its actual quality. 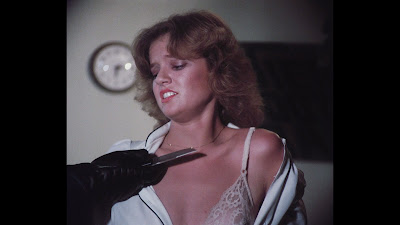 But for those of us constantly chasing the '80s slasher dragon, Satan's Blade is precisely the kind of lunatic sleaze we hope to find. It is not "good" by any rational criteria, but feels exactly like something we would have stumbled across on video store shelves in the mid-'80s, rented based on the cover art (the artwork that is awesome and represents the movie in literally no way) then been alternately disappointed and fascinated by. The movie opens with multiple women being killed at the hands of some lesbian bank robbers, who then strip down to their underwear and kill each other. Women dying in their underwear is the dominant visual motif in Satan's Blade; that's nothing new to the slasher genre, though there's something particularly sleazy about how much of it ends up on screen here because Castillo Jr. is genuinely into it or because he's cynical enough to understand what drives the market. Either explanation is equally disconcerting.

The Blu-ray of Satan's Blade is a joint effort between Olive Films and cult label Slasher//Video, the latter making their first foray into the world of high def. Taken from a newly struck 2K master, the 1.33:1 full frame transfer is very inconsistent, looking pretty good in one shot and showing a great deal of print damage in the next. It's the kind of film you accept looking kind of bad, though, because the alternative is not having in on Blu-ray at all; besides, I have no doubt this is the best the movie has ever looked and it's clear that despite some instances of scratching and debris, great care has gone into restoring this long lost film for high def. And though Olive releases don't typically come with bonus features, that's not the case here. Slasher//Video is clearly following the Scream Factory model and has included a good deal of supplemental material; the major difference here is one of production value.

There are two extended interviews with director Castillo Jr. that appear to have been filmed by setting a camcorder down in someone's living room (though to be fair, the camera moves in the second interview to get in close on some of Castillo Jr.'s collection of Satan's Blade props and memorabilia). The content is still interesting provided one can look past the presentation. Also included are two isolated pieces of score, a scene available only on the Japanese VHS release (of questionable quality), a scene only available on the Dutch VHS release (of similar quality), a photo gallery, the original trailer and a fan-made trailer for what might have been Satan's Blade 2. This is my favorite of the bonus features, as it once again gives truth to the maxim that no matter how you may feel about it, every movie is the favorite movie of someone somewhere.

Though only recommended for the most devoted fans of '80s horror -- those of us who can enjoy even those entries from the bottom rung of the ladder -- I'm thrilled to see Satan's Blade getting a Blu-ray release, particularly with the care it has been shown by Slasher//Video and Olive Films. This is the kind of movie that should be hitting high def in the waning days of physical media, if for no other reason than because it will otherwise be lost to time forever. We horror devotees are collectors, and specialty labels like Scream Factory, Synapse, Code Red, Blue Underground and now Slasher//Video and Olive Films are our lifeblood. Here's hoping this release is a success and that there are more '80s VHS horrors on the way. After all, we still need Microwave Massacre in 1080p HD.