Review: Welcome to Me 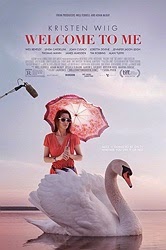 What a weird movie.

I saw Welcome to Me twice because I couldn’t get my bearings on a first viewing. That was a mistake. Instead of uncovering hidden layers of appreciation for it, I just ended up liking it less. This is a movie that’s begging to be directed by a black comedy master such as Bobcat Goldthwait, but instead it’s directed by Shira Piven. She doesn’t quite have total command over the tricky material. On the other hand, this is Kristin Wiig’s show more than anyone else, so part of the blame why Welcome to Me doesn’t quite work must be attributed to her. It’s a nice try, but that’s about the best I could say about it.

The movie is amusing at times, but never consistently funny and the darker (or more dramatic) elements of the story feel short-changed, never going all the way into satire or pushing the envelope into tastelessness. It’s a movie trying to have it both ways (being a daring indie and more of a mainstream Kristin Wiig comedy) and ends up in a weird wedge in-between that succeeds at neither. Welcome to Me also might be the movie of 2015 (at least to this point in the year) that wastes its cast the most. There are some strong actors in supporting parts who have very little to do other than to function as wallpaper for Wiig’s nutcase character to bounce off of. They are afforded little in the way of moments and it’s very frustrating, but more on that later. 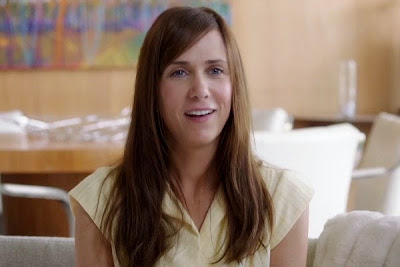 Alice Klieg (Kristin Wiig), a woman with Borderline Personality Disorder, wins $86 million in the Mega Millions lottery, quits her psychiatric meds and buys her own talk show dedicated to cover one topic only: her.

As Welcome to Me is more or less a showcase for Kristin Wiig as both a comedic and dramatic actress, it seems obvious to talk about her performance in-depth. It’s a mixed bag. I’m a fan of Wiig and she’s done great work in the past in movies like Bridesmaids and The Skeleton Twins, but here she’s playing a difficult character because the majority of the time Alice is a caricature similar to Penelope or The Target Lady on Saturday Night Live and the character becomes grating. But then suddenly we’re supposed to deeply care about this woman who is clearly troubled. It’s a difficult balancing act that I don’t think Wiig or the script pulls off and that sinks the movie. I will say, though, that Wiig looks beautiful and stylish most of the time (which is odd for a character who is so troubled in her day-to-day life) and scores some laughs, at times big laughs, just from her cadences and the way she pronounces certain phrases and words. Wiig is certainly talented, but this is an almost unplayable part for a feature length movie. 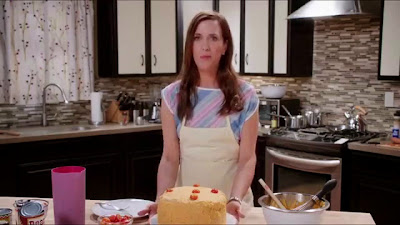 The rest of the cast is wasted, as I mentioned earlier. It features Tim Robbins, Joan Cusack, James Marsden, Alan Tudyk, Linda Cardellini, Wes Bentley and Jennifer Jason Leigh. Most, especially Robbins and Jason Leigh, have nothing to do other than function as their professions – i.e. the therapist or the producer. Cardellini, funny on Freaks and Geeks, is wasted as the best friend who has to always play straight (wo)man to Wiig’s character. Faring best is Joan Cusack, who brings some quirk to her role as the PA announcer/control room director of Alice’s show titled “Welcome to Me.” The major problem is that everyone has to play straight man to Wiig’s character (and not getting in on the “fun”), so if you don’t find Wiig amusing then you are just as exasperated as a viewer as the supporting characters are by the heroine.

A movie like this could work. In fact, it has worked in a movie like Billy Madison. If you are going to make your lead character a zany cartoon then you have to put them in a universe of other oddballs, which Welcome to Me does not. Because of that, the whole movie becomes grating and wears out its welcome well in advance of the end of its brief 87 minute running time. I think the movie is trying to say something about modern psychiatry and the world of daytime/public access/reality television. In its commentary it hits its mark. The movie seems to be saying that for some people, conventional ways of betterment do not work and more unconventional methods are needed. In the case of Alice, she needed to win the lottery and produce a “narrative infomercial” (as the movie calls it) about her life. That’s an interesting idea, as is the more tread-over theory that companies will put anything on television as long as there’s money to be made. It doesn’t matter if the topic is a woman’s nervous breakdown. 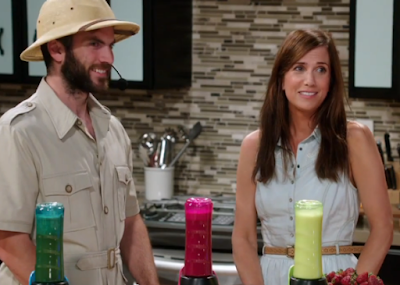 Is Welcome to Me worth watching? I don’t know. It’s interesting enough to be a curiosity and it stuck with me after a first viewing (leading to a second viewing), but you’re in for an unappealing experience that’s even nasty to look at (we spend a lot of time watching Alice’s show, which has cheesy production value). I admire what Piven and Wiig were going for here, but the execution leaves me wanting to take a shower and erase this movie from my memory. I don’t have enough reason to care about this character to make the effort of spending time with her worthwhile. She’s a joke ahead of a person, leaving me at odds with sympathizing or even empathizing with her.
Posted by Patrick Bromley at 12:00 PM