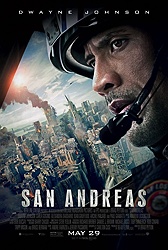 I had the pleasure of seeing San Andreas in one of the most famous theatres in the United States (the TCL Chinese Theatre in Los Angeles which has the third largest IMAX screen in the country). The reason I tell you this is not to brag but because my moviegoing experience was so good and memorable that I might be residually kinder to San Andreas than if I saw it in a standard multiplex like I usually go to. That aside, the movie really worked for me and I was very entertained. It’s a fine example of the disaster movie genre and a cut better than most of its peers (the high-water mark, for me at least, is The Poseidon Adventure).

San Andreas is a movie where it feels like the filmmakers studied other disaster movies and said to themselves “how do we make ours better than most?” It’s nothing groundbreaking but is an example of great trash, which is the best most disaster movies can expect to be. It has really incredible special effects (it doesn’t seem fake at any point) and director Brad Peyton (Cats & Dogs: The Revenge of Kitty Galore, Journey 2: The Mysterious Island) knows where to put the camera to get good coverage of the earthquakes, tsunamis and other mini crises involving cliffs and helicopters. I had my doubts if Peyton was up to the task of directing a big blockbuster based on his previous resume, but he does a nice job. 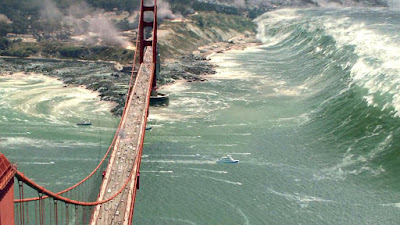 The plot in brief: Massive earthquakes strike California and it’s up to a rescue-chopper pilot (Dwayne Johnson) to make a dangerous journey across the state with his estranged wife (Carla Gugino) in order to rescue their daughter (Alexandra Daddario).

Despite solid performances from the cast, the characters are thin, which isn’t surprising for a disaster movie. Usually, though, they are “types,” but most of the people in San Andreas are just boring nice people who are good at their jobs (rescue pilot, scientist) or roles (parents, friends). The movie likes its characters, at least, so that’s something. Dwayne Johnson, of course, stands out the most and he proves to be a solid anchor for a movie like San Andreas. This is his Daylight. One awesome joke (about second base) aside, he is playing it pretty earnest here and not doing “The Rock” like he did in Furious 7 for example. Carla Gugino and Alexandra Daddario are both fine as his wife and daughter. A bonus is they are so beautiful to look at. I need to stress that…THEY ARE BEAUTIFUL TO LOOK AT. Tagging along with Daddario are two young men who I can best describe as Gentleman Timothy Dalton and a kid that will grow up to look like Colm Meaney. They’re fine. Whatever. San Andreas has one heavy and he’s played by Ioan Gruffudd, who projects little villainy. Bad casting there. Also worth noting is Paul Giamatti who plays “the scientist” and he’s actually quite good here, elevating material that is largely little more than expository. I did find it odd, however, that Giamatti and Johnson’s characters never intersect. It’s like they’re in two completely similar and parallel movies. It’s weird. And Kylie Minogue is in this for five minutes, so “aw yeah” for us I guess, right? 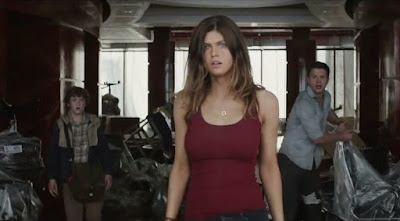 I did have some problems with San Andreas. While the special effects are great they are also redundant and numbing after a while, becoming CGI white noise. There is no stand-out special effects sequence in my opinion. At least it somehow doesn’t feel like wanton chaos and destruction where your enjoyment is sapped by the thought that thousands of people are dying. I used to be able to turn a blind eye to that more in '90s disaster movies than in something current like Man of Steel or World War Z, but in San Andreas the mass destruction didn’t bother me. The end credits feature a cover of “California Dreamin’” by Sia that is ridiculous in its histrionics. That might be the biggest disaster of San Andreas.

I saw the movie in 3D (I had no choice) and the 3D was fine but didn’t necessarily enhance anything. I’m so tired of this 3D trend, where the movie is playing only at certain times in 2D and other times in 3D. That’s stupid. Play both options at the same time so people have a choice and are not forced to see 3D when they would prefer not to. Gah. Ugh. Theatre owners can be such dicks sometimes. But anyways, back to the movie: it won’t change your life or anything but if you want to see it, go see it in a theater…in 2D. I can’t imagine this movie playing nearly as well on Blu-Ray or cable. 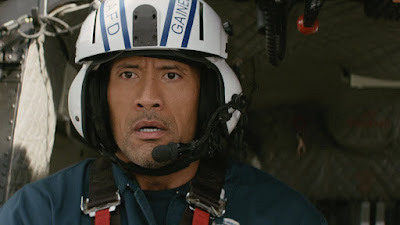 On the whole San Andreas is exciting, fun and very competently made. I found it to be well-paced, energetic and thrilling. If you like disaster movies, this is a really fine example of one, succeeding admirably on its intentions as a summer blockbuster. It’s a throwback to movies of its ilk from the 1990s (e.g. Deep Impact, Dante’s Peak, Volcano, Twister) and better than all of those examples. This is my favorite summer movie so far this year after Mad Max: Fury Road.
Posted by Patrick Bromley at 5:00 AM