The Overlook: The Osterman Weekend

This is Sam Peckinpah’s last film.

Anchor Bay finally got around last week to releasing The Osterman Weekend on Blu-ray disc. This, as with most things in life, is a mixed blessing.

The Plot In Brief: CIA operative Lawrence Fassett (John Hurt) is back at work after his wife is murdered. He outlines a plan to CIA Chief Max Danforth (Burt Lancaster) in which he will persuade tough-as-nails television personality John Tanner (Rutger Hauer) to turn on some college friends, who have all somehow become Soviet spies since graduation. The friends have made a tradition of meeting annually for what they call “Osterman weekends” after one of the pals. 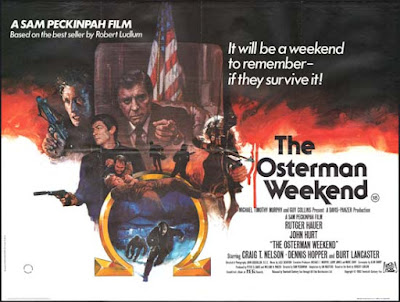 Fassett tells Tanner that his friends Joseph Cardone (Chris Sarandon), Richard Tremayne (Dennis Hopper), and the eponymous Bernie Osterman (Craig T. Nelson) are planning to make Tanner the fall guy in their nefarious plot. Fassett even fills Tanner’s house with hidden cameras and surveillance equipment to catch the traitors red-handed during the eponymous weekend. But is someone lying? Is everyone lying? Is the dog a spy? Is this marriage in trouble? Most importantly, Who’s zoomin’ who? This movie is based on a Robert Ludlum novel, so the answer to all of those questions might just be “yes.” But is it? Is the answer “yes?” Is this an international game of cat and mouse? Or is it an international game of cat and mouse… and spy? And who will win: Fassett... Tanner... Danforth... Cardone... Tremayne... the eponymous Osterman... or maybe Tanner’s wife? Will the audience win? Will the audience demand ask for their money back?

Viewed today, The Osterman Weekend has some interesting things to say about personal privacy in the age of NSA data collection and cell phone cameras. The film is prescient in predicting a future where everyone is under scrutiny at all times and actually goes on to suggest (none too subtly) that the ways we interpret all that data may leave a little something to be desired. 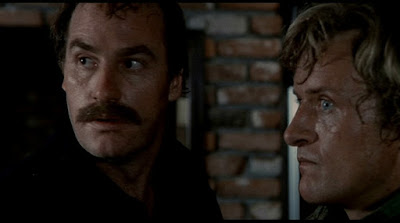 To me, what’s even more interesting is to consider John Hurt’s character, Fassett, as a stand-in for director Sam Peckinpah. Fassett has positioned cameras throughout the house; he’s the mastermind behind the scenario, and is pulling all the strings. Fassett watches everything; he even communicates with Tanner when Tanner’s “performance” is not to his liking. Throw in alcoholism and a bad temper, and there is Peckinpah himself.

The performances vary. Rutger Hauer appears here the year after he wrapped Blade Runner, and it’s interesting to note how his accent fluctuates throughout the film. Ironically, it’s strongest at the end of the film, which makes me wonder if that was shot first. John Hurt is a reliable villain. Craig T. Nelson sports an outrageous handlebar moustache and unashamedly overacts; yet his character actually starts to become endearing by the film’s conclusion. Dennis Hopper and Chris Sarandon are given practically nothing interesting to do or say—they are wasted in the film (not THAT way), serving as little more than placeholders for characters who may have been better developed in the novel.

We have all heard of actresses with “no nudity clauses” in their contracts, but The Osterman Weekend had me wondering if somehow the producers of this film demanded the opposite. The film features oodles of nudity (n’oodlety!) from all three female leads (Helen Shaver, Cassie Yates, and Meg Foster) that adds nothing to the plot or tone. As a red-blooded American film fan, I do not shrink from nudity (Ha!) but I must say that here I found it distracting. Am I getting old?

Yes! Finally a question we can answer. 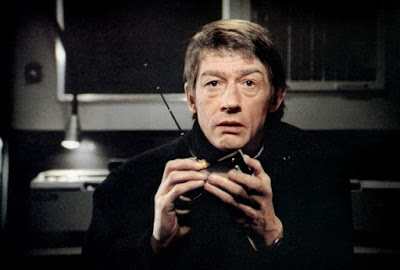 The film was not a financial success, and there are certainly many reasons for this. One reason might be the poster (below), which suggests that the titular weekend is a women’s bow-hunting expedition. At least that movie would have a clear narrative! Plus Meg Foster, who’s featured on the poster, isn’t even in the film that much—save for a critical scene that is pretty much (SPOILER ALERT) spoiled by this crappy poster. 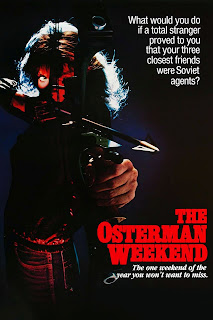 The Osterman Weekend is full of sequences that recall Sam Peckinpah’s salad days and greatest films. Unfortunately, in Osterman these sequences come across as somewhat halfhearted—the work of a director who’s out of luck, out of time, and out of invention. All of the bullety-bullety-bullety stuff (and there is plenty) recalls his epic take on violence in The Wild Bunch, but is not executed nearly as well. A ho-hum chase scene twenty minutes into Osterman resembles the crazy car chase sequences in The Getaway, only isn’t nearly as good. The CIA siege of Tanner’s house comes off as weak tea compared to the famous siege sequence in Straw Dogs. We begin to think that Peckinpah is simply piling on the slow motion action sequences because he believes that is what he has been hired to do—make a “Sam Peckinpah film.” This is a pity, because I read that many of Osterman’s actors took substantial pay cuts to have the chance of working with this living legend. The finished film comes off as a 103-minute compromise, a paper tombstone to Peckinpah’s extraordinary career.

In summary, it’s poorly executed, narratively confusing, and sort of unsatisfying… but you still need to see it. C’mon, it’s Peckinpah, babies.

The Osterman Weekend is available at last on Blu-ray from Anchor Bay Entertainment.