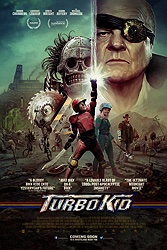 If you don't like Turbo Kid, I'm not sure we can be friends.

That probably sounds harsh. I don't mean to suggest you're not allowed to like Turbo Kid. It's not a movie for everyone, and even some of the audience for whom it's made won't connect with it for one reason or another. But as someone who nakedly wears his love of '80s genre movies both on this site and in life, Turbo Kid connected with me in such a way that for someone to reject it would be like a rejection of me. Thus, we cannot be friends. It's ok. Being friends with me isn't all that great. Just ask Doug. 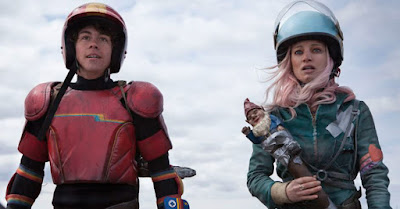 A Canadian/New Zealand production (which right there is reason enough to love it) written and directed by the team of François Simard, Anouk Whissell and Yoann-Karl Whissell, Turbo Kid takes place in the distant apocalyptic wasteland of 1997. Water is scarce and a one-eyed dictator named Zeus (played by the great Michael Ironside, because OF COURSE HE IS) is running the show, forcing people to fight to the death for sport. Minding his own business is The Kid (Munro Chambers), who stays out of trouble and scavenges the wasteland on his BMX for anything usable or entertaining; his prized possession is an old comic book he reads again and again, dreaming of a life as a superhero instead of being lonely and afraid. Things change when he meets Apple (Laurence Leboeuf giving the year's most adorable performace), a young woman of endless positivity who insists on being his new best friend. He also finds a special turbo-charged glove with incredible power, which comes in handy when he and Apple and a loner named Frederick the Arm Wrestler (Aaron Jeffery) are hunted down by Zeus and his band of savages. 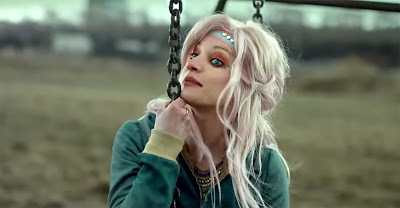 Maybe the best "It Came from the '80s" movie not released in the '80s, Turbo Kid is a pitch-perfect tribute to the fantasy and sci-fi movies of that decade, from the production design to the photography to the amazing synth score by Jean-Philippe Bernier and Jean-Nicolas Leupi to the use of mostly practical effects in achieving the film's gleefully over the top violence and gore. The filmmakers get so many of the details right: the character names, the Stan Bush song that plays the first time we see The Kid ride his BMX across the wasteland (complete with a slow-mo shot of an only midly impressive stunt), the bad inspirational speech Apple gives (shades of Monique in Better Off Dead). It's more than just an attempt to mimic the aesthetics, though; the filmmakers have synthesized not only the look and feel of those movies but also their heart and imagination and created something that isn't just a copy of a copy. It's its own thing despite seeming like a lot of other things.

Earlier this year, the internet went crazy for Kung Fury, a crowdfunded short film that tried to do a lot of these same things. While it demonstrated a lot of creativity and ambition, I couldn't get past the hollow air-quote nature of the whole thing -- it threw in a bunch of signifiers of things that are "awesome" (Ninjas! Robots! Dinosaurs! David Hasselhoff!) but never added up to any signs. It was an exercise in DIY visual effects and editing. 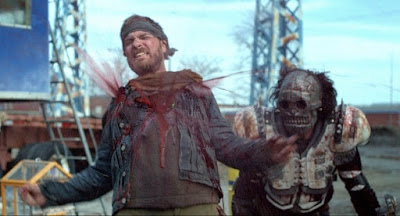 The movie that genre fans and hipsters should be losing their shit for is Turbo Kid, which has all of the things people loved about Kung Fury but which actually has a soul to make the awesome stuff resonate. It helps, too, that the film is more than just a stylistic exercise; there is a story being told, and while it's formulaic (by design), the performances are so winning and the narrative mechanics sturdy enough that we actually lose ourselves in the film and invest in what is happening. The relationship between The Kid and Apple is genuinely sweet enough that despite visual gags which might otherwise undercut their most significant moments together, those beats are actually really romantic (I can't be more specific without spoilers, but you'll know the moment when you see it and it is wonderful). That's a difficult balancing act to pull off, but Turbo Kid walks the line beautifully from start to finish. I'm sure it doesn't hurt that -- all due apologies to Imperator Furiosa -- Laurence Leboeuf's Apple might be my favorite movie character of 2015. 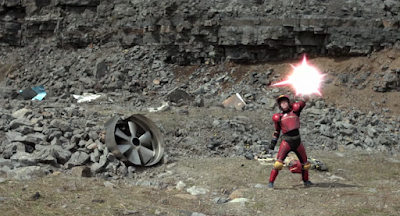 I love, love, love Turbo Kid, and not just because it's both referential and reverential of the '80s movies on which I grew up. I love it because the filmmakers made a really good movie inside of that aesthetic, one with heart and humor and limitless charm and lots of bloody violence staged for laughs instead of shocks. They understand not just the "what" of the specialness of '80s genre movies, but the "why" as well -- they connect the dots with character and emotion where other similar efforts have just laid them out on screen and expected audiences to be impressed by the dots. On paper, the whole endeavor seems like a nostalgia-fueled stunt. In practice, it's one of my very favorite movies of the year.

Turbo Kid is in limited theatrical release and on VOD/iTunes beginning August 28.
Posted by Patrick Bromley at 5:00 AM