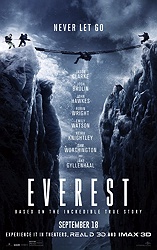 A good movie I will forget by the end of this review.

I have a couple of problems with the rollout of Everest, so I’d like to get those out of the way before reviewing the actual movie. First, the movie is being released in IMAX 3D only for one week before rolling out nationwide in conventional (i.e. non-IMAX 3D) theaters. The IMAX 3D piece implies that this movie is primarily a visual “event,” which it’s not...or at least it shouldn’t be. It’s an elegy to a group of men and women, some of whom died painfully on a mountain. It’s not a white-knuckle thrill ride. It’s a sad story about a bunch of people -- some who survived but many who died. Second, when I bought my IMAX 3D ticket I received an Everest patch with an illustration of the mountain. The patch reads “Everest Regal IMAX.” So it’s like I’m one of the people on the expedition, right? That was the intention? That’s in poor taste, Regal. 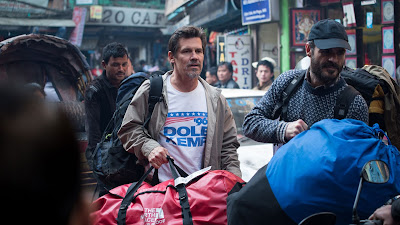 Anyways, as for the movie itself, Everest is good but forgettable, unfortunately. I saw the movie two days ago and it has not stuck with me much on an emotional level, which is surprising since this is a very emotion-rich story being told. The movie follows a climbing expedition of Mt. Everest back in 1996 that was devastated by a snow storm. The ensemble cast is playing the real people who took part in the tragedy. The cast is led by Jason Clarke in, what is becoming more common, the lead role; he is very good and believable as Rob Hall, a climber and adventure consultant from New Zealand who is leading an expedition of less experienced climbers up Mt. Everest. Also on his team are Martin Henderson, Emily Watson and maybe the movie’s MVP, Sam Worthington. I am not a fan of Sam Worthington normally, but here he’s really good at taking a supporting part and giving it some weight and star power. Maybe he’s just not cut out to be a leading man in the movie but rather a valuable supporting player. Also in the cast is my boy Jake Gyllenhaal (who is under-utilized), as well as John Hawkes and Josh Brolin who provide their usual solid support. Wasted is the great Keira Knightley, whose role is relegated to being the wife of the Jason Clarke character and whose performance mainly takes place talking into a telephone. 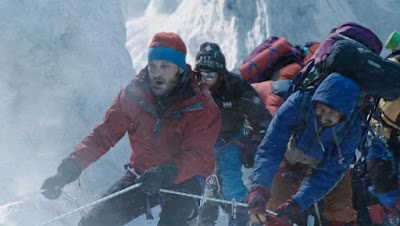 But the performances are not what Everest is most focused on, because the grandeur of the mountain and the adventure inherent in the story is what takes center stage. And at that the movie succeeds. I can’t deny that the IMAX 3D photography is beautiful and appropriately harrowing-looking and the set pieces are suspenseful. This is a remorseless movie. When someone dies on the mountain there is no swelling of the score or elongated farewell. Sometimes it’s as simple as a person is in the frame one second and then falls out of the frame the next. It’s very startling. The movie does take its time in the first half to set up the characters so that there should be emotional heft when one of them is killed or badly injured; however, it all comes across as inert when that actually happens. I am having trouble rationalizing why that is, but it is. Maybe it’s just too many characters to keep track of (there is probably a dozen or more climbers) or that they are relatively interchangeable. Everest has been criticized as owing just as much to a '70s disaster movie as it does a movie like The Perfect Storm, which did a solid job of balancing the emotional stakes with the spectacle. For the most part Everest does the same. However (as I said earlier), the movie has not stuck with me in the slightest. 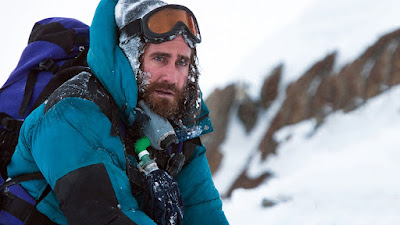 Everest is a major improvement for its director Baltasar Kormakur (Contraband, 2 Guns) and I was impressed with his work here in comparison to his previous efforts. He knows how to effectively stage an action sequence and he’s pretty good at handling actors and giving them space to do their thing. Based on Everest, I’m interested in seeing what he does next. I’m just so lukewarm in my appreciation and enthusiasm for this “good” movie. I don’t get it.

As we enter the Fall movie season (aka “the Oscar season”) I have primed myself to be blown away by these big dramas. When they aren’t great, they often feel like a disappointment, which is unfair. I had the same reaction to this weekend’s Black Mass as I did Everest – good, but a letdown because they’re not all-timers. So, I guess the problem is with me and my expectations and not the movie. Is Everest worth your time? Yes, and I would see it in IMAX 3D. It features photography and depth of field you can’t replace on most TVs.
Posted by Patrick Bromley at 5:00 AM