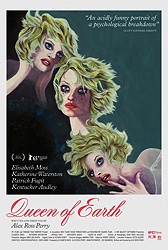 What a powerful and crazy and frustrating movie.

Queen of Earth is one of those movies you watch and know immediately that it has been made by a born-filmmaker. Alex Ross Perry (The Color Wheel, Listen Up Philip) has put together one hell of a movie. The direction of the acting, the shot selection, the cinematography (and choice of film stock), the music etc. – it all works. And yet, something’s missing with Queen of Earth and I can’t find myself embracing it. Maybe I’m not supposed to. It’s one of those frustrating movies for me where I’m left “WTF” and frantically trying to process my feelings about it as I write. This leaves me with a question: Can I recommend a movie on technical merits alone even though it left me cold and I never want to see it again? I respect the hell out of Queen of Earth but my good feelings about it end there. It didn’t add up for me into a rewarding or pleasant viewing experience. 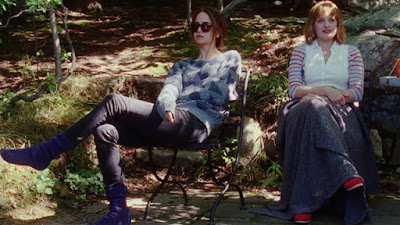 I’m going to crib from the IMDB plot summary to describe Queen of Earth because I don’t want to reveal too much for future viewers. In short, the story is about two women, Catherine (Elisabeth Moss) and Virginia (Katherine Waterston), who grew up together but discover they have drifted apart when they retreat together to Virginia’s family lake house. The movie is influenced by some classic “woman on the verge” movies but to give away those titles might be too much of a spoiler for the direction Queen of Earth is going to take. What I will say is that the thankfully ambiguous trailer* implies more “thrills” than the movie provides – this is more of a drama than anything else. And it’s an expertly acted drama. Not enough can be said about the performances from Moss and Waterston.

Having not been a viewer of Mad Men, my relationship with Elisabeth Moss as an actress is limited although I was impressed by her work in last year’s underrated relationship drama The One I Love. That performance is nothing compared to her work in Queen of Earth. Moss is asked to run a marathon of emotions and every moment rings true. It’s the type of performance that should be studied in acting classes. Katherine Waterston was one of the best parts of last year’s Inherent Vice (a movie I did not warm to on the whole) and her work here continues to show her range and chops. She reminds me a lot (not only in appearance) to Jennifer Jason Leigh. She plays characters that are intelligent, conniving and a bit mysterious. Her performance playing off of Moss is pure acting gamesmanship. These are two women who are friends but really have no business being friends. Their relationship is toxic and both actresses take their opportunities to portray very meaty characters and end up creating something memorable. Also very good (in a supporting role) is Patrick Fugit, who is best known as the young journalist from Almost Famous. He’s a completely different person here than in that movie and he is truly excellent. On a scene to scene basis, Queen of Earth really works because you’re seeing powerful, skilled performances speaking the words of a quality writer (also Alex Ross Perry). 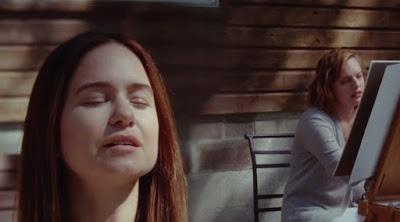 It’s what the movie adds up to where I have my problem. The tone of Queen of Earth makes the movie feel like the end of the world and yet the denouement comes across as too small for what has preceded it. And the movie can sometimes be a chore to sit through. Almost every scene is rife with confrontation and it makes the 89 minute runtime into an endurance test. I think Alex Ross Perry might have benefitted from sprinkling in a scene or two of the characters being happy, or at least not fighting or paranoid about what the others are saying about them. I had no idea why Catherine and Virginia were friends to begin with, especially in light of a speech midway through the movie where Virginia coldly explains that she has no problem extricating people from her life that she doesn’t feel add value. In its current cut, Queen of Earth is almost unintentionally funny because it is so bleak. 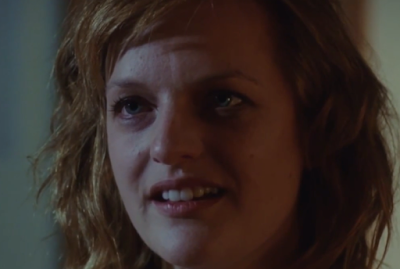 As I said at the beginning of this review, Queen of Earth is a very difficult movie to critique. I don’t think you’ll see many better acted or directed movies this year, but the experience of watching the movie is rough and not for all viewers. It’s not the type of bleak movie that is so good you still feel elated after watching it. It just makes you feel bleak. At least for me it did. However, I will say this is my first Alex Ross Perry movie and I’m eager to see his previous movies based on his work in Queen of Earth.

The movie is now available on VOD and in limited release in theaters.

*Check out the trailer. It’s pretty terrifically put together. I love the voiceover and stylistic choices employed, many of which carry over into the movie.
Posted by Patrick Bromley at 5:00 AM