Am I at all interested in seeing a little-known film noir featuring many of the people responsible for The Maltese Falcon? Let me think about… YES. YES. YES. Yes, please!

During my bi-monthly scan of new offerings from the fine folks at Warner Archive, I discovered yet another film noir that had previously eluded my view. The mere fact that the 1947 film Three Strangers stars Sydney Greenstreet and Peter Lorre was enough to clinch the sale. It has been waiting, babies, on my unwatched shelf for several months, casting its gaze over all my activities like some sort of bronze Chinese idol. 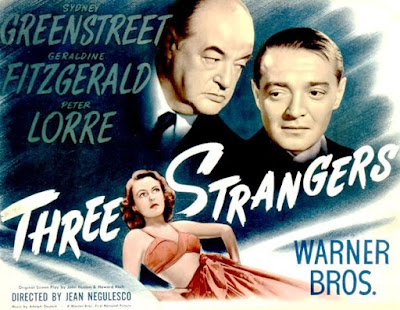 The plot in brief: The film begins one night on a crowded street in London, 1938, as Jerome K. Arbutny (Sydney Greenstreet) is lured to the flat of Crystal Shackleford (Geraldine Fitzgerald). Dashing his hopes of an anonymous rendezvous, he discovers a charming and drunken Johnny West (Peter Lorre) is there as well; the three are strangers to each other, and Shackleford insists they not share their names. She shows them a bronze Chinese idol, Kwan Yin, which she claims will grant a wish to three strangers during the Chinese New Year at the stroke of midnight. Arbutny is cynical, West doesn’t seem to care one way or another, and Shackleford fervently believes. The three hatch a scheme to share a National Sweepstakes ticket. If the prophecy is true, the three strangers stand to be rich enough to fulfill their dreams. Fate, as in all film noirs, has yet to play her hand.

Apparently, Three Strangers started life as a kind of sequel to The Maltese Falcon. Not a traditional sequel, mind you, given how many of Falcon’s characters are dead or in prison by the end of the film; instead, it’s more of a re-teaming of talent. John Huston, who had adapted and directed Falcon, co-wrote the script; he was unable to direct because he was still serving in the US Army Signal Corp. The film was co-written by Howard Koch, who had adapted Casablanca for the screen in 1941, and was here only months from being blacklisted by HUAC. 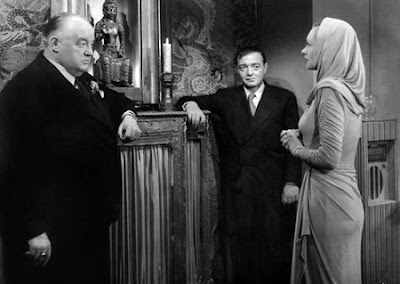 Three Strangers echoes The Maltese Falcon for several reasons, and if you love that earlier film as much as I do, babies, then you are in for a treat here. Both films revolve around the lure of a totem—in Maltese Falcon, it’s the titular bird; in Three Strangers, all the characters’ actions revolve around a National Sweepstakes ticket. The film stars the popular pair of Greenstreet and Lorre, though here they are playing very different roles. The cruel, lying femme fatale character, played so memorably in Falcon by Mary Astor, is here essayed by the equally capable Geraldine Fitzgerald. I give Huston and Koch a lot of credit for replicating the tone and atmosphere of the original but not simply producing a carbon copy. Indeed, Three Strangers has one of the most complex and interesting plot structures I have ever seen in a film from the 1940s.

Crazy Historical Tangent About The Irish Sweepstakes: One small problem is that Three Strangers relies on the audience having a firm and complete understanding of the intricacies of the Irish Sweepstakes—this would not have been a problem in 1946, since the Sweepstakes was enormously popular. Originally conceived in 1930 as a way to help impoverished, under-populated Ireland raise money for badly needed hospitals, at its height the Irish Sweeps sold millions of tickets in the UK and (illegally) the US, mostly within immigrant populations. Unlike modern lotteries and sweepstakes, it was a two-level system: once tickets were purchased, the stubs were put into a drum and the potential winners were drawn (by real nurses, to great public fanfare) and assigned to a horse in an upcoming race; other tickets were then valueless. The value of the drawn tickets correlated to the odds on the horse in the race, and final payout was then dependent on whether that ticket’s horse would win, place, or show; the cash prizes could be enormous, for the era (era.) Ironically—at least in relation to its place in a film noir like Three Strangers—the Irish Sweepstakes was rife with graft and counterfeiting, and was later revealed to be something of a scam. 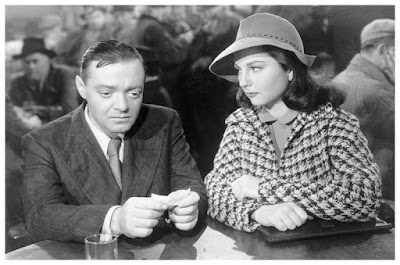 Once you’re clear on how the Irish Sweepstakes works, there is a lot to love in Three Strangers beyond the stellar lead performances. Although films noir are known for twisting, labyrinthine plots, Three Strangers is even complicated by those standards, but the exposition is handled well and the twists create more intrigue and tension than confusion. It is nice to see Peter Lorre playing so far from his usual typecasting; he’s practically the romantic lead; in fact, both Lorre and Greenstreet, two of the best character actors of all time, are here given real chance to shine in larger, more central roles.

The film also features an intriguing subtext about the limits of faith and belief. The three main characters are sharply divided by their attitude about the Kwan Yin prophecy and the way they each view life itself. The film seems to come out on the side of the character who has learned not to challenge fate—in general, any attempt to change one’s fate in a film noir is a fool’s errand—but the ending challenges that trope and adds dimension to the movie’s themes and even its treatment of the genre. 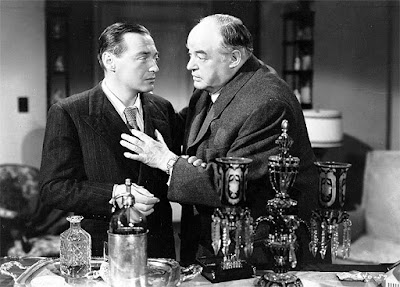 Many aspects of the film seem quite contemporary, and I am a little surprised that no one has yet attempted a remake. The plot is very modern, almost like a Robert Altman film, and the screenwriters seem to enjoy thumbing their nose at the Production Code. For instance, when Greenstreet’s Jerome Arbutny is first lured to Shackleford’s apartment, it is clear that he is expecting sex; we soon learn that is exactly what brought Lorre’s Johnny West there as well. During a particularly tense scene, Shackleford maliciously burns a man’s hand with her cigarette. A rich widow mistakenly believes a man is suggesting a three-way between him, her, and the ghost of her dead husband, and she explains that the ghost is “just NOT that broad-minded!” Later, when a female character is clobbered with a heavy object, the camera hovers above her as a stream of blood runs down her face. Although most aspects of classic film noir flagrantly disregard the Production Code, these scenes seem more even more earthy and brutal than usual; coupled with the compelling performances, it gives Three Strangers an immediacy and realism that’s unexpected from a movie released in the mid-1940s.

The fact that Three Strangers received a release on Warner Archive—instead of a “proper” DVD or Blu-ray release—proves that it is tragically overlooked. If I have not been able to convince you by now, babies, check out this terrific noiry-noir trailer.

It’s available from Warner Archive as MOD DVD or for rent from Amazon VOD. Do not rely on ancient prophecies or bronze idols—take responsibility for your own lives, dammit, and watch this movie.