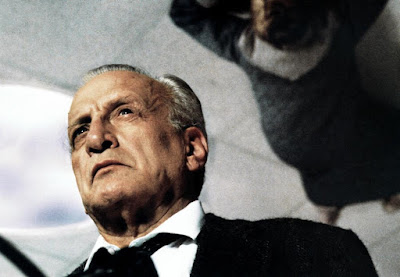 If you have never seen The Exorcist III, it is definitely the second best movie of the series and a pretty great horror movie with one of my favorite jump scares of all time.

It’s going to be hard to get into why I love George C. Scott in Exorcist III without spoiling some pretty huge plot points, so I’ll try to go spoiler free for a while. Scott plays Kinderman, a detective near the end of his career who was good friends with Father Damien Karras, one of the main characters from the original Exorcist, hence where the connection comes in. Within the first few minutes after his introduction we see the three separate aspects of Kinderman’s life: his work life, family life, and friend life. What Scott gets right here is there isn’t much change in who his character is, but slight enough that we notice it; this always made Kinderman feel more real to me. Nowhere is this more apparent than with Kinderman’s relationship with his best friend Father Dyer (Ed Flanders). Flanders and Scott have really great chemistry together and the two of them have conversations that are so effortless in the delivery that they make the relationship between them seem totally genuine. 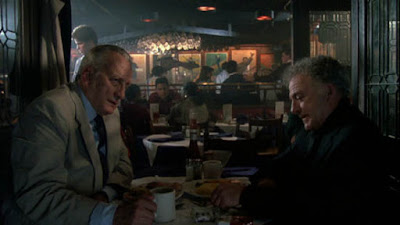 Scott really shines once the killing starts happening (not a spoiler; it’s a horror movie). It would be easy to say the Scott “plays it straight” here, but that would be too easy. Where the greatness of Scott’s performance comes through is in the struggle that Kinderman starts to feel while investigating these murders. It is almost chilling, the coldness that Kinderman has while he just goes about his police work, anticipating what is going to happen and not being surprised when it does. One of the underlying themes of the Exorcist movies is doubt and the questioning of faith, and Scott does a great job in dealing with this as most people do. He has his doubts but is confronted by supernatural forces that force him to reevaluate everything. Where the script asks him to talk about it, he’s never accusatory or grandstanding but very matter of fact in his delivery.

There are two scenes in particular that Scott just nails it. The first is when Kinderman realizes that the Gemini killer is going after his daughter and runs to the police car and tells them to drive. Instead of screaming or dropping a bunch of curse words, for the first part of the entire chase Scott just bites his hand. It’s so great, and when he finally snaps, it’s “Then ram the damn thing!” It’s such a great reaction to what is happening and a lesser actor probably would have used this as an opportunity to overact, but Scott’s reaction is so much more effective in my book. 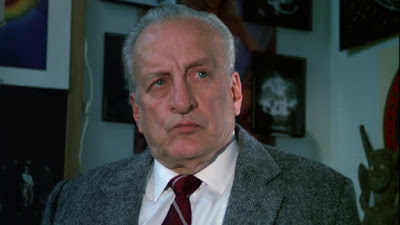 The second scene(s), and probably my favorite sequence in the movie, is when Kinderman finds out his best friend Father Dyer was killed. The first part of it is when he has to investigate Dyer’s body. When Scott investigates the body in the first killings, there is a coldness in his face that feels like its just business as usual. In comparison, when Scott investigates Dyer’s body, he gives off this grimace in his face that just looks truly painful and you don’t know how he hasn’t broken down. A few minutes later, Kinderman is being screamed at by a hospital official about security, and you just feel the intensity as he tries to be the calm one in the room. Eventually Kinderman loses his cool and shouts out “Will you just shut your damn mouth!” Instead of doing more yelling, or trying to put on the calm, cool, persona, he starts to cry. It’s such a great reaction and Scott covers his face as if he’s ashamed he’s just broken. It’s such a moving scene and that scene in itself is worth the price of admission…or download.

The Exorcist III is still gritty for being shot in 1990. It feels a lot like a '70s horror flick, but uses imagery, subtleness and pacing to make a really solid horror movie that is not overshadowed but made better by a great performance from Scott.