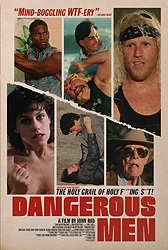 Think of the craziest movie you have ever seen. It's half as crazy as Dangerous Men.

How does one begin to describe Dangerous Men? It's the latest pickup of an older title from the great Drafthouse Films -- much as they picked up and distributed Miami Connection and The Visitor -- and to call it terrible is totally misleading and unfair even though it is, by all conventional criteria by which we usually measure movies, a terrible movie. The acting is abysmal. The editing is nonsensical to the point of becoming hallucinatory. On every single technical level, Dangerous Men fails spectacularly.

I had so much fun watching it. 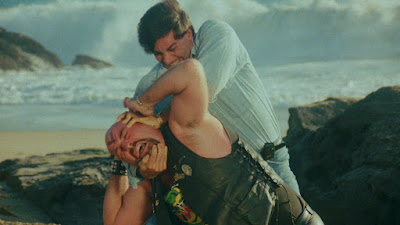 Who is John S. Rad, you ask? Well, he's an Iranian millionaire (real name Jahangir Salehi Yeganehrad) who had made a few films in his home land before coming to America in 1979 with the dream of making a movie in the U.S. Dangerous Men is that movie. He starting making the film in roughly 1984, then spent 20 years shooting it on and off and another 10 in post production before finally releasing it to a few theaters in Los Angeles in 2005. Now thanks to Drafthouse Films, the movie is getting a limited theatrical release and is available on various VOD platforms. A DVD and Blu-ray release will follow in 2016. Rad passed away from a heart attack in 2007, but Dangerous Men will live on forever.

Describing the plot is pretty pointless. The first half of the movie is like a bizarro universe take on Ms. 45, in which a woman (Melody Wiggins) who gets engaged to her boyfriend. They're having a romantic moment on the beach when they are attacked by some bikers, one of whom tries to rape her (practically every woman in the movie is nearly raped at some point). Her fiancee steps in and kills one of the bikers, then is stabbed and killed in retaliation. The woman, thinking fast, tells the biker who JUST TRIED TO RAPE HER AND KILLED HER LOVE that she's happy to be rid of the loser and wants a real man. They go immediately go out to lunch together to a restaurant where they are brought food upon sitting down despite not having ordered a single thing. They go back to her place and she stabs the biker to death, thereby becoming a kind of vigilante who seduces men and then kills them.

Spoilers: this woman disappears from the film completely at about the halfway point. 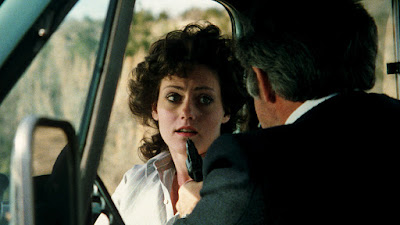 I can only assume this is because the second half of Dangerous Men was shot almost a decade later (the clothes and hairstyles change). Here it switches to the story of a cop -- the brother of Wiggins' boyfriend -- going after some different bikers. There's more near-rape, more near-murder. The last 15 minutes of the movie become something else, with a totally new group of cops in pursuit of a biker named Black Pepper (Bryan Jenkins). None of these characters have appeared or have been talked about prior to these last 20 minutes. It's fucking remarkable.

It's a weird thing to talk about bad movies, because the common perception is that they can only be enjoyed ironically. But enjoyment is enjoyment, right? Does it matter what is making us happy as viewers, or is it the happiness that matters? Yes, cult audiences tend to spring up around movies like this and The Room and Birdemic and even Miami Connection, and with that comes a certain hipster remove -- a subset of fandom that gathers to laugh at the thing because they feel superior to it. Eventually the snake eats its tail and we get three goddamn Sharknado movies.

But Dangerous Men isn't like that. It comes by its ineptitude totally honestly. I thought of Miami Connection a lot while watching it, actually; though it's a lot sleazier and lacks Connection's endless positivity and sweetness, there's something wonderful about a movie that's been willed into being by someone who doesn't seem to know a lot about making a movie. It's the reason I respond to the work of Ed Wood. Crude and clumsy as the films may be, it's hard to argue with the passion spilling onto the screen. John Rad has that passion. Not a lot of talent, but passion. 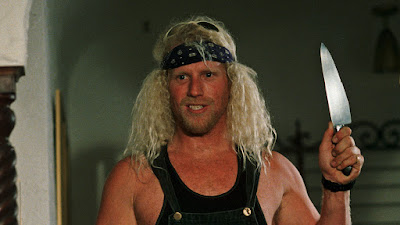 The disconnect between Rad's "vision" and his abilities is where the fascinating tension of Dangerous Men finds it strongest footing. It would be impossible to list all of the bizarre moments and eccentricities that make the film so special. Rad must have been fond of the score he composed, as it literally plays through every moment of the movie -- it's wall to wall, non-stop music. The dialogue is edited together terribly. At one point, two characters are talking on the phone and it's obvious that someone is just playing a recording of a voice in the room. A woman exits the side door of a bar and is immediately on the beach frolicking in a thong bikini. Images appear for a few frames with no context, then disappear and are never referred to again. This isn't just a bad movie -- it's a dream of a bad movie. And it's wonderful.

Dangerous Men is the kind of movie best viewed with a crowd -- not just because there's bound to be laughter and that kind of thing is better enjoyed in numbers, but also because it's helpful to be surrounded by other people just so you can verify that you are, in fact, seeing and experiencing what the film has to offer. It's a crazy, surreal movie and one which will be unfairly dismissed by some as camp. It is not. For better or worse, John Rad is totally sincere in his efforts, and that's what makes Dangerous Men special. He gave more than 20 years of his life to this movie. It is, for lack of a better word, his masterpiece. And what a masterpiece it is.