Review: The Night Before 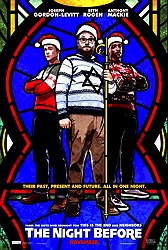 The Night Before was one of my most anticipated movies of this holiday season, based primarily on that wonderful trailer and the participation of Seth Rogen, who I maintain is one of the most likable stars working in movies today (both on and off screen). The movie is a mess, but its an incredibly well-intentioned mess with a winning cast, a lot of laughs and a shit ton of holiday spirit. It's a pretty hard movie to dislike.

The movie reunites co-writer/director Jonathan Levine with his 50/50 stars Joseph Gordon-Levitt and Seth Rogen who, along with Anthony Mackie, play three best friends with a long tradition of getting together every Christmas Eve to have wild times. It's something they started back in the early 2000s after Gordon-Levitt's character, Ethan, lost his parents and had no more family with whom to spend Christmas. It's 15 years later, though, and Ethan still hasn't really moved on with his life -- he's working a job he hates and pining away for his ex-girlfriend (Lizzy Caplan) to whom he could not commit. Isaac (Rogen) is expecting his first child and stressing out about his impending fatherhood, while Chris (Mackie) has become a successful football player complete with fame, a Red Bull endorsement and a sick social media game. Now, on their last Christmas Eve together, lives will be changed, cameos will be made and Miley Cyrus will be sung. 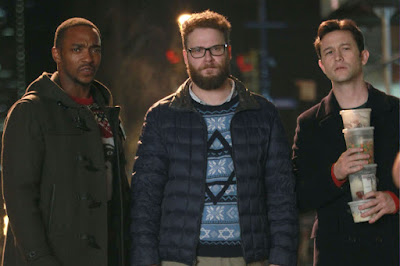 There's so much to like in The Night Before that I feel like a Scrooge (#seewhatIdidthere #thisismysuicidenote) finding fault in it, but it's a movie with a lot of problems. It relies far too heavily on convenience and coincidence to move the story along, and the result is some sloppy plotting that takes overly complicated digressions when a straight thematic line would have been more effective. It tries to cover too much ground with each of its main characters, meaning there are more conflicts to be resolved than can satisfyingly wrapped up in its 100 minutes. And this is just personal preference, of course, but as someone who has never been a big fan of "drug" humor, it bummed me out to see Seth Rogen relegated to a feature-length bad trip. Don't get me wrong -- he performs the hell out of it and manages to be funny throughout, but it ends up being a one note freakout.

Tonally, the movie is all over the place. Sometimes, it's the kind of raunchy R-rated film we've come to expect from Rogen and company (including his most frequent collaborator Evan Goldberg, credited here as one of four screenwriters). Sometimes it's sweet and sincere. Sometimes it becomes silly and veers into broad fantasy. This isn't a criticism, per se; as I'm fond of saying, it's rare for a movie to be even one thing successfully, so I appreciate the willingness of The Night Before to do a lot of different things. Some work better than others -- because it bounces around so much, there's never quite enough time for any of these tones to really develop enough to stand on its own -- but the mixture gives the film its own distinct vibe. It's the kind of movie that likely plays even better on a second viewing, when those shifts become less a thing that needs adjusting to and more a part of the fabric of the film. 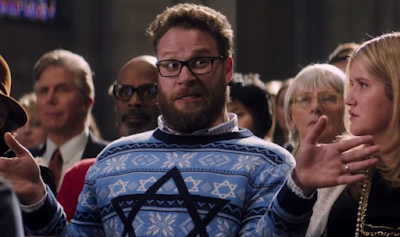 The cast helps carry the movie through any potential rough spots. Gordon-Levitt and Rogen already worked well as best friends in 50/50, and their dynamic is one into which Mackie's easy charm is a good fit. The three actors are likable enough on their own, but together have a loose familiarity that speaks to a real sense of history. I also like that The Night Before leans into Gordon-Levitt's often manic, need-for-approval acting style and offers up a character-based justification for his approach; there's a funny running joke in which every character makes mention of the fact that Ethan seems to be trying too hard to compensate for something but he insists he's only reacting to whatever problem is at hand. Every few minutes, a new and welcome face appears, whether it's Nathan Fielder as a limo driver or Broad City's Ilana Glazer as a Mackie fan or Mindy Kaling as a friend or Jason Mantzoukas as a drunken Santa or a couple of genuinely funny cameos that I won't dare spoil here (pro tip: don't read the movie's IMDb page before seeing the movie, as they're all given away there). Not to Judd Apatow: this is how you do celebrity cameos.

Levine doubles down on making this a Christmas movie -- it's not just a comedy that takes place on Christmas, but rather a love letter to many Christmas movies past. It's unfortunate that everyone feels the need to call attention to the references, though, so when a character wipes out on Micro Machines he has to say "I've been Home Aloned!" (this despite the fact that the character who drops the tiny cars makes mention of The Sticky Bandits, which is actually a Home Alone 2 reference, and that if she's trying to imitate those characters she should be falling on the Micro Machines, not placing them...NITPICK). The score, by Marco Beltrami and Miles Hankins, lays the holiday whimsy on especially thick, but it ends up giving the movie an innocent charm. This is not a comedy of misanthropy or embarrassment. It's a movie about decent people who want to take care of one another, and about forgiving the flaws and mistakes of the people you love. It's a lovely sentiment. 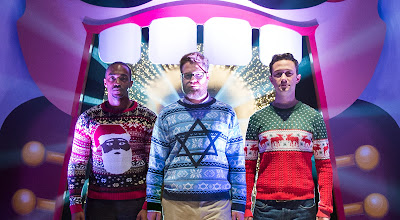 Levine is a good filmmaker, too, so he's actually taken care with how the movie looks. Cinematographer Brandon Trost seems to be channeling Robert Richardson, but there are a lot of shots in the movie that are highly stylized and genuinely gorgeous. At a time when most comedies are flatly photographed for the bare minimum of visual information -- even Judd Apatow and Paul Feig, probably the two biggest comedy directors right now, just point and shoot the actors in the frame -- it's nice to see a filmmaker paying attention to the formalist properties of a comedy.

Apparently we've reached critical mass with movie titles and now have to recycle existing names, meaning every time someone mentions The Gift they have to differentiate if they're talking about Sam Raimi's Southern Gothic thriller or this year's Joel Edgerton-directed creepfest. It's going to take some time before any mention of The Night Before doesn't make me think of Thom Eberhardt's '80s teen comedy in which Keanu Reeves accidentally sells prom date Lori Loughlin to a pimp, but I may get there eventually. I like this movie because it means so well and because, like a lot of the comedies with which Seth Rogen aligns himself, it is willing to underscore the laughs with real emotional stakes. Like its characters, The Night Before is messy but trying to be better. That's hard to fault.
Posted by Patrick Bromley at 12:00 PM