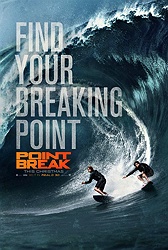 I didn’t hate it. I just didn’t like it.

The remake of Point Break is a movie that shouldn’t exist. It’s inferior in every way to the original from 1991 starring the late Patrick Swayze and Keanu Reeves. That movie’s great and I love it. Point Break (1991) means so much to me that I once hosted a private screening of it at a repertory movie theater. Going into Point Break (2015), I tried really hard to judge it on its own merits and remove myself from the original. That was and wasn’t a difficult task because it feels very different from the original but it’s filled with signifiers from Kathryn Bigelow’s classic. 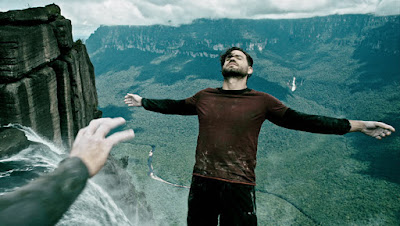 Point Break (2015) is not a complete loss, so I’ll start with the positives. The direction and cinematography by Ericson Core (Invincible) is phenomenal. Yes, I said it. It’s amazing, especially in 3D (if you’re going to see this movie, see it this way). The movie is built around completing eight extreme sports challenges, so there are sequences involving surfing, rock climbing, skydiving, snowboarding and mountain biking and they’re all visually interesting and kind of exciting. This is not a bad movie where it drags. This is a bad movie that is diverting. For that, I guess I’m thankful. I was expecting the movie to be like walking two hours while naked in the Wyoming snow and then having to do stuff to a dingus but it’s not. It’s just like walking for two hours in the Wyoming snow with clothes on and no dingus.

Where the movie doesn’t work is everywhere else. The performances range from bored (Edgar Ramirez as Bodhi and Ray Winstone as Pappas) to fucking terrible (young Ted Levine look-a-like Luke Bracey as Utah in maybe a career-killing performance). Teresa Palmer shows up as the Lori Petty stand-in and she’s pretty so that’s nice but she has very little to do and her character motivation and relationship to Bodhi makes no damn sense whatsoever. Delroy Lindo is in this, too, and it’s nice to see he’s still working. Ever notice how characters actors like Lindo work for a few years and then completely disappear? The script is garbage – filled with bullshit pontificating about liberation and nature and clumsy functional dialogue of no interest. I appreciate that the filmmakers mostly tried to do something different with the players in their Point Break but what they did is not very good. 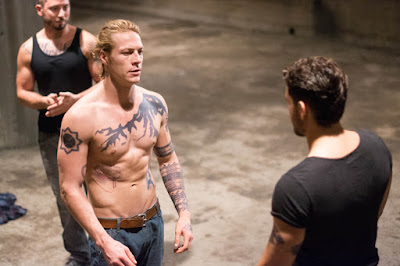 If you’ve read this far you probably are interested in knowing if the movie is laughably bad. At times it is. My favorite examples are a speech that one of Bodhi’s cronies gives to Utah, which is along the lines of “Have you reached your point? The point where you break.” Also, the FBI introduces us to Bodhi’s gang with surveillance footage that looks like a $100 million dollar movie complete with exceptional coverage and camera angles. Utah fires his gun in the air just like in the original, though this time it’s to no effect. There’s also an exchange where Utah asks Bodhi why (if he’s so EXTREME) is his stuff not on YouTube? Bodhi answers with something like “if a tree falls in a forest and it’s not on YouTube, has it fallen?” Then Utah gets a grin on his face like “this guy’s smart.” I also laughed at James Le Gros being on-hand (he played one of the bank robbers in the original) but this time he’s playing an FBI agent. The baton has been passed. And it’s covered in shit.

This new iteration is so inconsequential that getting super mad about it strikes me as silly. It’s the type of movie that opens Christmas day and is in the fucking dollar theater by January 8th. That is its charm. No one is ever going to think of this remake or confuse it with the original if someone mentions the title Point Break. Point Break (1991) is still the Point Break for the new generation. The remake is a movie for no one. It might as well be a sequel to XXX and outside of character names no one would know the difference. 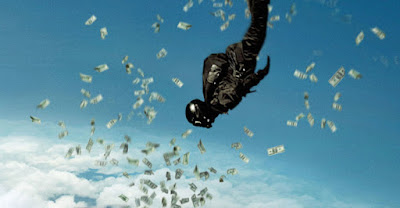 Oh, one more funny thing about Point Break (2015). One of the characters in Bodhi’s crew is named Chowder and he tragically dies. They’re all like “WE LOST CHOWDER!!!” If a Chowder falls off a mountain, post it on YouTube.
Posted by Patrick Bromley at 12:00 PM