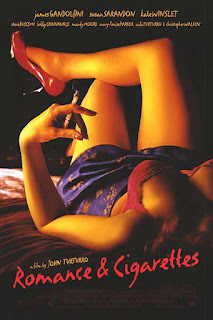 I first caught the film at the Roger Ebert Overlooked Film Festival in 2008, and thank God I did because this film had massive distribution problems in the USA. A modest hit when it played the Venice Film Festival and later in England and Ireland, Romance & Cigarettes was barely released in the States. Although United Artists was supposed to handle distribution chores in the U.S., writer/director John Turturro wound up distributing the film himself.

The Plot in Brief: Nick Murder (James Gandolfini) approaches a mid-life crisis by acquiring a new mustache and a mistress. His wife Kitty (Susan Sarandon) learns of his infidelity and kicks him out of their bedroom. Nick is obsessed with Tula (Kate Winslet) but misses being close to Kitty. Everyone smokes. Someone is circumcised. Will Nick leave his wife for an uncertain future with Tula? Will he end the adulterous relationship and return to Kitty? Will we ever know why, why, why, Delilah? 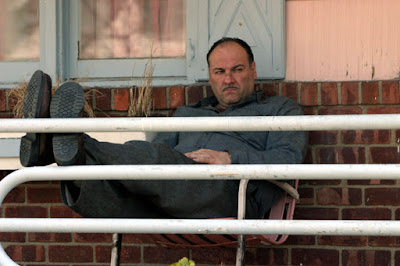 I give director Turturro a lot of credit for being ambitious—he lends the film a lively sense of place and energy—but at times he needs to rein it in. The film has too many characters, too many subplots, and ultimately tries to span too many genres; Romance & Cigarettes can never make up its mind about what it's going to be. Like its musical numbers—which may begin as diegetic radio broadcasts, then become characters singing along to a record, and might end with lip-synching or dancing—the film, in trying to juggle five different genres at once, winds up being none of those genres in a completely satisfying manner. 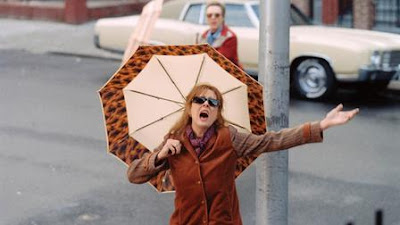 The musical numbers are marvelous and full of energy—definitely my favorite parts of the movie. The rest of the film wants to be a kitchen sink, method-acting slice of life. Trying to bridge the chasm that exists between these two styles may have been part of Turturro’s point; still, I would be happier with the result if the whole film followed the style-and-genre lead of its own musical numbers. Seriously, you owe it to yourself to see a redheaded Kate Winslet lip-sync to "Scapricciatiello (Do You Love Me Like You Kiss Me)” as sung by Connie Francis—a scene that is worth the price of admission alone.

Turturro curated a unique, quirky soundtrack that includes songs spanning decades of American popular music. Early in the film, every man on Nick's block (including two garbage men and one small boy on a Big Wheel) sings and dances in the street to Englebert Humperdink's "Lonely Is a Man Without Love." Kitty's crazy Cousin Bo (Christopher Walken) describes a previous romantic relationship, employing Elvis Presley's obscure "Trouble" and some enthusiastic diner waitresses to make his point. (Even when he is merely walking, you can just tell that Walken can dance.) Later in the film, as he is being loaded onto an ambulance, Gandolfini and the neighborhood chorus extol the virtues of their favorite romantic icon, using Bruce Springsteen's exultant "Red-Headed Woman." The choice of songs here plays a big part in the film's charm. Again, the strength of the musical numbers just makes me wish there were more of them. 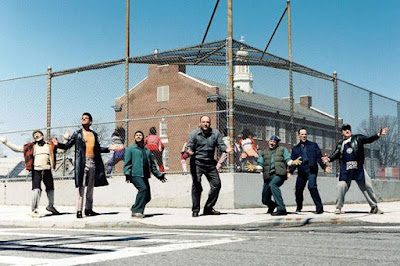 Cameos abound in Romance & Cigarettes and the performances are uniformly great. Besides the main cast, the film features Bobby Cannavale as a romantic boy next door; Mandy Moore, Aida Turturro, and Mary Louise Parker as Gandolfini’s daughters; Steve Buscemi as his work buddy, Angelo; Elaine Stritch as Gandolfini’s bitter mother; Eddie Izzard as the neighborhood priest (!); and Amy Sedaris as a very nosy neighbor. 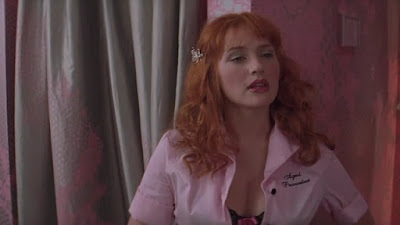 This is a tough call, babies. It’s a hard film to recommend because it is certainly not everyone’s cup of tea. I really liked it the first time I saw it; I was a little more critical viewing Olive Film’s recent Blu-ray release. On the other hand, it’s one of the most unique and entertaining musicals of the last ten years. I DO recommend it, but only in the way I would recommend an obscure brand of cigarettes that I am convinced only I enjoy. You should take my advice and buy a pack! But only if you think that you already kind of like its unique tobacco blend. Not sure what kind of imaginary cigarette you like? Here—take a drag off of mine and watch this fun, peppy trailer:

Remember, babies, smoking is bad for the lungs… but musicals are good for the soul.