Top of the world, Ma!

When you think of classic gangster movies, what’s the name of the first actor that comes to your mind? Chances are you either think of Humphrey Bogart or James Cagney, and both men are forever tied to those early Warner Brothers crime dramas of the 1930s. Because of this, Cagney is an actor that I’ve been aware of for a very long time, even without being exposed to many of his movies, because his influence has been indelible. The phrase “You dirty rat” has been a part of the culture for longer than many of us have been alive, even though Cagney never uttered the line (the actual line is “Come out and take it, you yellow-bellied rat,” from 1932’s Taxi!). Cagney’s influence is everywhere, right down to the spoof movie-in-a-movie Angels with Filthy Souls as seen in Home Alone. Still, I hadn’t really seen a lot of Cagney movies until a couple of years ago when I set out to fill in my pre-1960 movie knowledge and ended up falling in love with classic Hollywood. I can now report to you that James Cagney is a fascinating conundrum responsible for some really great movies.

I don’t mean to compare today’s actors and movies with the actors and movies of yesteryear because it’s just not fair. It’s come up several times lately that older movies (especially the ones from the time period that Cagney was active) seem almost beyond criticism. Part of this, I think, is because these older movies are just so completely different from the stuff we see in theaters now that it’s difficult to judge by the same yard stick. Older movies are almost like stage plays; in the absence of special effects, sweeping cinematography and flashy editing, the movies live and die on their dialogue and characterization. You get long takes with rapid-fire line delivery, and you have to lean in and really pay attention or you could miss the words that are flying at our ears with the rhythm of a Thompson machine gun. There’s a sense of urgency, all the time. The performances, even in comedies, are really intense. The actors themselves are also intense, which is understandable, given the hard lives many of them had come from. 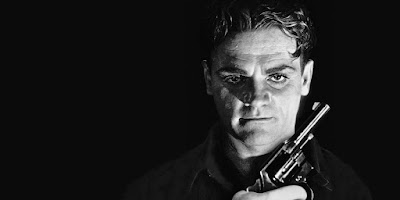 Cagney embodies that intensity with a gravitas that seems to put many of his peers to shame. I’ve heard that he was the very first film archetype (though he was more likely the first archetype of talkies), and I can see why. His New York street-tough accent was perfect for movies in a time when sound was new, and he wasn’t like anyone else. His peers were often polished and smooth, but Cagney was acerbic and tough from a youth spent struggling to survive. When he brandishes his gun and tells some scumbag how it’s gonna be, you believe he has the experience to back it up. That credibility is something that can’t be overvalued, and seems even more precious in light of how rare it was and still is.

It’s not even debatable that Cagney starred in some of the most iconic gangster movies of all time. Warner Brothers was synonymous with a certain kind of film during the 1930s, and that’s where the actor really cut his teeth, and turned in performances that would define him. Movies like The Roaring Twenties and Public Enemy chart the rise of the criminal element in a believable way, and Cagney’s characters seem both dangerous and somehow relatable. He gets to be the good guy in G Men, playing a federal agent taking on the mob, and a decade later he appeared in some truly memorable noir films, White Heat and Kiss Tomorrow Goodbye. Cagney seemed to always be starting trouble or finding himself caught up in it despite his best efforts. 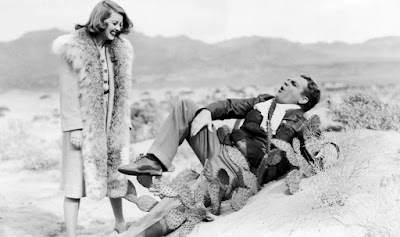 What’s been a big surprise for me, though, is discovering how much I like his non-gangster work. To be honest, I actually prefer his everyman roles to his tough guy roles. It blows my mind that the same scowling guy who I believe would shoot me dead for looking at him the wrong way is also a really likeable romantic lead who has a great sense of humor and a natural charm. Last week I watched The Bride Came C.O.D. where he co-stars with Bette Davis. He plays a pilot who is down on his luck (is there any other kind?) and takes odd jobs to make ends meet. Bette Davis is a spoiled socialite on her way to Las Vegas to get married to some guy she just met a few days earlier. Cagney is tasked by her father with kidnapping her and making sure the wedding doesn’t happen. When the plane goes down in the desert the comedy really starts to unfold. Cagney is an absolute delight in the film, never taking anything seriously and waltzing through the movie with this amused grin on his face for the entire runtime.

It also amazes me that this same guy was a successful song and dance man, appearing in musicals like Something to Sing About and Footlight Parade; Then there’s Yankee Doodle Dandy where he sings and tap dances down a flight of stairs in the White House (this was Abraham Lincoln’s second-favorite method of descending stairs; the first involved bacon grease and the hand rail). I don’t know why, but the fluidity with which the actor slips between tough guy roles and them fancy singin’ and dancin’ roles seems unusual to me, and it has taken some adjusting to reconcile that the a-hole who smashes a grapefruit into Mae Clark’s face in The Public Enemy also happens to be a Yankee Doodle Dandy. Check it out, Hugh Jackman! Cagney beat you to it by 80 years. Just when you think you can pin someone down as being only one thing, they defy expectations. I haven’t even touched on how he played Lon Chaney in The Man of a Thousand Faces. 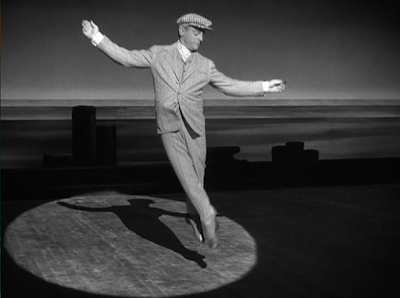 The one realm where the streetwise Cagney isn’t able to disappear into his work is that of the western. I know of three: The Oklahoma Kid, Run for Cover, and Tribute to a Bad Man. To me, Cagney seems out of place in the open landscapes of the American west. His New York accent is too distracting, and you can’t see his face under a cowboy hat without thinking it would look better under a fedora. Or maybe it’s just me and my inability to allow him this one last shedding of expectations. Maybe the problem is not his performance, but my inability to let him be this thing outside the limitations I’ve put on him. No…on second thought, I’m pretty sure he’s miscast.

Cagney retired in 1961, only popping in a small handful of roles over the next 25 years. This also befuddles me because bona fide movie stars of today rarely go away by choice. I can only think of Sean Connery and Gene Hackman when I try to name actors who have disappeared for more than a few years, and neither of those guys can touch Cagney’s 20 year absence from the silver screen at the end of his career. 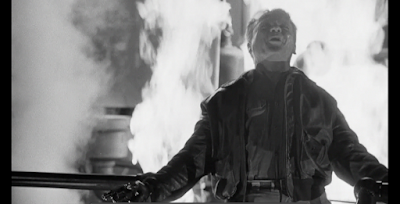 I feel really happy when I discover an actor that made a bunch of great—or even simply good—movies, and I will gladly disappear down a rabbit hole and try to see everything they ever appeared in. Humphrey Bogart was the first golden age actor I felt this way about, then Robert Mitchum. Not I guess I’m adding James Cagney to the list of actors for whom I’m going to have to track down EVERYTHING. Well, I guess there goes the next two to three years. Cagney, you dirty rat.