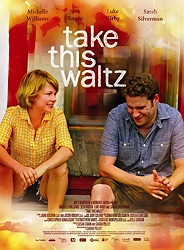 Adam Riske: Take This Waltz (2011, dir. Sarah Polley) Writer/director Sarah Polley's love story broke my heart. It's a pretty special romantic drama filled with the usual solid Michelle Williams performance, but also surprisingly powerful ones from comedians like Seth Rogen and Sarah Silverman. There are several standout sequences in Take This Waltz, ones that have stuck in my head for years since seeing the movie. Not a good date movie, though, so you've been warned in that regard. 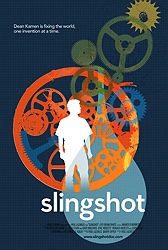 Adam Thas: Slingshot (2014, dir. Paul Lazarus) Do you know who Dean Kamen is? Yeah, neither did I. Dean Kamen is the guy who invented the Segway and made millions developing medical devices. Well, Dean has decided that he was going to take his considerable resources and develop a small water purification system that purifies millions of gallons of water for Third World countries. In the beginning, the most interesting thing about the documentary is Dean Kamen, who is a little eccentric and has lived a fascinating life. At one point during the movie I did find myself getting a bit emotional wondering what the hell I’ve done with my life compared to Kamen. Then it hits me: Slingshot suffers from an extreme case of hagiography to the point where it starts to make Kamen godlike and uninteresting, but this problem caused the movie as a whole to be more interesting. In the middle of Slingshot I picked up my iPad to see if Kamen himself had produced the documentary (he did not, from what I could find). I started to think that maybe this was some sort of puff-piece designed as a film version of an infomercial to get us to all buy into Kamen’s crusade against dirty water. I was about to get angry and insulted but then realized if I was going to get swindled into anything, a campaign against dirty water and helping the poor is probably a good swindle. Here is why I am recommending it: as far as a movie- it’s fine (Copyright Patrick Bromley, F This Movie!), but I can say I don’t think I’ve ever seen a documentary like it. I was never bored, I was interested, but it also made me look at the entire genre of documentaries from a different angle. 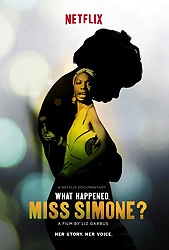 Heath Holland: What Happened, Miss Simone? (2015, dir. Liz Garbus) You know what really bugs me? This latest trend in trailers and commercials of taking absolutely fantastic songs and covering them in the weakest, most ineffective way possible. Nina Simone is one of the artists whose music has been a victim of this fad, and it feels criminal to me. If you're unfamiliar with Nina Simone, this documentary is out to change that. Mixing live performances of her undeniably powerful jazz, folk, and blues music with interview footage, the documentary reveals a gifted musician and singer, a feminist, a mother, and an activist who advocated violent, militant action for change. Miss Simone was such a complicated, flawed human being, but an undeniable talent, and this documentary, which debuted at Sundance in 2015, has now found an exclusive home on Netflix as one of their "Netflix Originals." 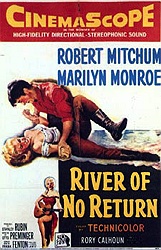 Patrick: River of No Return (1954, dir. Otto Preminger) An ambitious widescreen western that alternates between gorgeous and perfunctory, though there's much more to like than to dismiss. Robert Mitchum, reportedly drunk during most of the filming, is good as always, and Marilyn Monroe gives one of her best performances (and maybe has never looked prettier) despite clashing with the director and being completely miserable. Some of the rear projection is clunky but enjoyable in a "this is what they used to do" way. Mostly, I love the photography and the fact that a big sprawling western like this really comes down to a story about a few damaged people making a family together. And while you're clicking around Netflix this weekend, be sure to watch the recently-added World of Tomorrow, which was just nominated for a Best Animated Short Oscar. It's only 16 minutes long and is one of the best, most heartbreaking movies of last year. Trust me.
Posted by Patrick Bromley at 12:00 PM