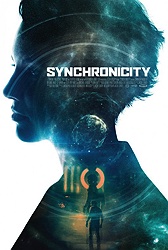 Effect without a cause, sub-atomic laws. Scientific pause.

Indie sci-fi is my jam. Unlike a lot of expensive studio science fiction (which is rare, depending on how wide you cast the net -- after all, the Transformers movies could be considered sci-fi) that focuses on creating impressive visuals through CGI and forcing an action beat every 30 minutes, indie science fiction depends on ideas. They have to, because they can't compete with what the majors are doing when it comes to effects. Even those indie sci-fi movies that are just ok at least attempt to begin with a compelling story or concept and work their way forward from there. It would be nice if every movie made within the studio system could say the same.

Synchronicity, the latest film from writer/director Jacob Gentry (one of the three filmmakers behind 2007's underrated The Signal), is a movie that starts with some cool ideas and works forward from there. That it is not entirely successful is unfortunate, but I'm the kind of movie fan that would rather watch a movie like this that stumbles than something that's easy but ordinary. 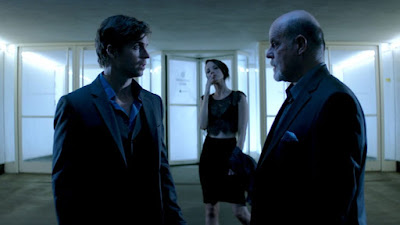 Chad McKnight plays Jim, part of a trio of scientists (which also includes AJ Bowen and Scott Poythress) working on unlocking the secret of time travel and being bankrolled by wealthy businessman Klaus Meisner (Michael Ironside, giving good Ironside). Two major discoveries take place in one night that changes the course of their experiement -- and of Jim's life -- forever: first, the appearance of a rare flower, and second the arrival of a mysterious woman named Abby (Brianne Davis) to whom Jim is immediately drawn but who possibly cannot be trusted.

I won't go any further in describing the plot of Synchronicity, not because I'm overly cautious about spoiling certain aspects (though I am) but rather because at a certain point I don't think it does either of us any good to try and explain what happens. Like a lot of time travel films, this one is put together like an intricately structured puzzle in which events and motivations that seem false or confusing early on become clearer as the movie continues and the bigger picture begins to come into focus. That means the film requires a certain amount of patience, as it can be somewhat...rough...in early going. The performances seem stiff, the writing underdeveloped. The reasons for this make sense later on, so be sure to stick it out. 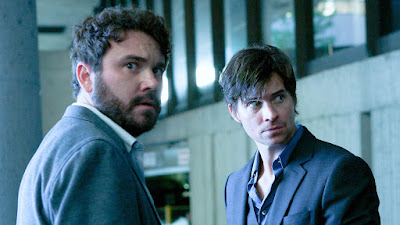 The middle section of the movie is the strongest as the characters begin to understand exactly what is happening and attempt to formulate plans to undo any damage they may have caused by messing with the timeline. McKnight and Brianne Davis have their best moments during this section, warming to one another in a way that's vital given how much of the story is dependent on the instant connection we're meant to believe exists between them. AJ Bowen, the movie's secret weapon, shines in particular as a kind of audience surrogate, reacting the developments being explained to him as any of us might. He and Scott Poythress are the comic relief, but Gentry resists the temptation to make them too overly jokey. They keep things light, and for all of Synchronicity's twistiness and mind-fuckery, it's a very light movie.

By the last act, though, the film starts to buckle under the weight of its own construction. It's a time travel story by way of Back to the Future II, in which multiple versions of the same characters are running around narrowly missing one another and having to reset the timeline because of mistakes they made the last time. That's fine. It can be fun and certainly impresses as a piece of story construction, but never develops enough of an emotional connection to be more than an exercise. For some viewers, that's going to be what they want from a time travel story. It's clever and it's fun. I just prefer to a care a little more about who it is going through the wormhole. 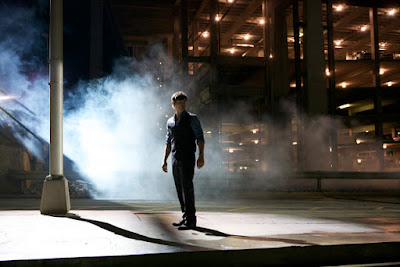 As it unfolds, Synchronicity is very entertaining. Gentry directs with a lot of style, giving even the low-fi charm of the science equipment a lot of expensive-looking polish. I'm frustrated that he borrows so heavily from Blade Runner in the movie's aesthetics, drenching everything in blue filters with streams of white light blowing through every slat in the Venetian blinds. Ben Lovett's score is moody as hell and super cool but quotes so liberally from Vangelis that, combined with the film's photography, Synchronicity ends up blowing right past homage and landing on imitation, though I guess if you're going to copy it makes sense to copy from the best. I wound up appreciating the construction of the film more than I did investing in much of what happened. Maybe I liked it more because I'm such a fan of time travel stories. Maybe because I'm such a fan of time travel stories I held it to a higher standard. I'm still not sure. That would require thinking about Synchronicity a while longer, and to be honest I really haven't done that. It was just that kind of movie for me.