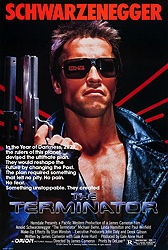 James Cameron is a great filmmaker. His storytelling may be overly conventional and he's a pretty bad writer (particularly of dialogue), but he knows better than most of his contemporaries how movies work. There is a reason he directed the biggest movie of all time and then followed it up with the new biggest movie of all time. He understands pace and classical structure and visual storytelling as well as anyone save maybe for Steven Spielberg, but Cameron does those things inside of movies that are always pushing the technology of cinema forward. He is equal parts traditionalist and innovator, a claim that can't even be made by the likes of George Lucas, who, outside of Star Wars, is not a traditionalist and whose innovations haven't caught on in nearly the same way.

If it sounds like I'm being defensive, it's probably because I am. I feel like I have to defend my respect and affection for Cameron the filmmaker because Cameron the person does not make it easy for me. He is a blowhard and an egomaniac. He is, by nearly all accounts, an enormous prick on set -- one of these directors who claims to demand greatness and gets results and therefore has license to treat people like shit. His dialogue is clumsy and, at times, eye-rollingly bad. The emotional content of his films is unambiguous, nakedly worn as text and never subtext. I'm aware of the criticisms of him and his work. I maintain that he is a great filmmaker. His movies bear that out. There remains some debate as to whether or not The Terminator really is Cameron's first movie, as he's credited as the director of Piranha II: The Spawning, release two years earlier in 1982. Cameron himself has claimed that he was fired off Piranha II very early on and has almost nothing to do with the version that was released. For the purposes of this piece, I'm going to take his word for it and call The Terminator the first "real" James Cameron movie. Despite being his first, despite being his cheapest and despite being the most simplistic of his films, it's still the one that works the best more than 30 years later. Why is that?

Perhaps the simplicity is key. You know the story by now: it's 1984 in Los Angeles. Two people are sent back in time from the year 2029, where a war against man and machines has decimated the planet. The first is a Terminator (Arnold Schwarzenegger), a cybernetic machine sent to kill ordinary waitress Sarah Connor (Linda Hamilton), who will one day give birth to a son who will one day lead the uprising against the machines and win. The second person sent back in time is Kyle Reese (Michael Biehn), a soldier for the human resistance who travels back to protect Sarah and guarantee not only the future birth of her son but the survival of the entire human race.

The story is simple: thing wants to kill people, who have to get away from thing. Those are the stories Cameron tells best. The Terminator remains the best screenplay he's ever written for exactly that reason; it's not humorless (the breakout line "I'll be back" will never not be funny), but it's not prone to the stupid one-liners or attempts at comedy that torpedo Cameron's writing so much of the time. Maybe it's because producer Gale Anne Hurd is credited as a co-writer (though Cameron, being Cameron, has denied her contributions to the script). Or maybe it's because it bears a strong resemblance to the work of Harlan Ellison, who threatened legal action and received both a settlement and a title card referencing his influence (which Cameron has also denied) at the end of the movie. Whatever the cause, it's Cameron's most stripped-down movie on a number of levels, the main one being the story. It's his cleanest film. 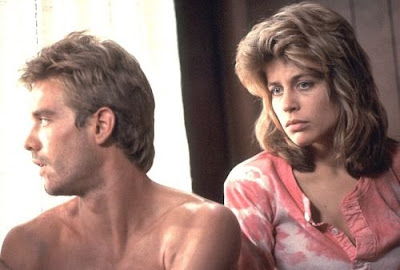 Of course, there's a good chance it remains my favorite of his movies because it pulls together so many of my favorite genres. At its heart, The Terminator is a slasher movie with a major sci-fi bent told through the language of a breathless action film. Unlike the usually standard '80s "we're in danger and running for our lives, let's stop and hump" moment, the sex scene in The Terminator (which I forgive partly because I like the love story in the movie and Michael Biehn sells the shit out of it and partly because I love Brad Fiedel's iconic score), isn't a wasted moment. Considering what the movie is about, it's arguably the most important scene in the movie (and arguably the series). A lengthy set piece in which the Terminator lays ways to entire police station might seem extraneous as it doesn't directly relate to the pursuit of Sarah Connor, but it does serve to establish the "just how dangerous is he?" in regards to the Terminator. It raises the stakes. It's character development for a machine. Better yet, it's character development through action. This is an art that has largely been lost in the years since, as action sequences and exposition must stand apart probably because modern action is all handled by pre-vis and is meant to deliver spectacle, not advance story. Cameron's approach to the exposition in The Terminator is ingenious because he puts it all in a chase scene.

Cameron originally wanted Lance Henriksen to play the Terminator, reportedly enlisting the actor to dress the part as part of Cameron's pitch. The studio wanted O.J. Simpson, perhaps because they knew a killer when they saw one. The role eventually went to bodybuilder-turned-actor Arnold Schwarzenegger, who had supporting roles in a few movies before breaking out in Conan the Barbarian two years earlier. Schwarzenegger has stated he was reluctant to take the role, feeling that at this stage in his career he should only be playing the hero but eventually giving so much thought to how the Terminator should be played that he knew he had to do it. The rest is movie history, as it was really The Terminator that turned Arnold Schwarzenegger into a huge superstar and a household name. That's because he's fucking awesome in the movie: impossibly enormous, flat voice and cold, dead eyes. It's a role that he would play three more times over the course of his career and the one for which he will always be best remembered. Though there's not a lot asked of him in the original movie -- he's a shark -- he would find new layers and nuances in the sequels and eventually create a character that's subtle and interesting, particularly in Terminator Genisys, in which he's the only goddamn thing worth watching at all. It stands to reason that I would love The Terminator as much as I do as it's the movie that really gave rise to the career of one of my favorite movie stars of all time. 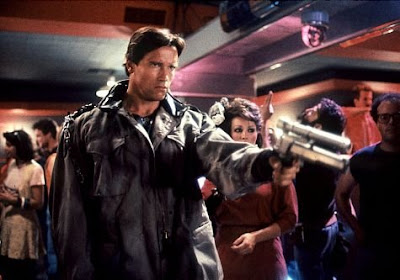 One of the things I really love about The Terminator is just how much Cameron accomplishes with such a limited budget. These days he's known for making the most expensive movies of all time, inventing new filmmaking technologies and singlehandedly advancing the state of the art with infinite resources at his disposal. In 1984, though, he was out to prove himself and making a movie for just over $6 million. While that went further in '84 than it does now, it still isn't a lot of money considering what the movie pulls off. The Cameron of The Terminator is the guy who worked as an art director and FX designer for Roger Corman's New World Pictures -- a guy who knew how to stretch a buck and would work tirelessly until everything was up to his insanely high standards. And say what you want about even his more recent super expensive movies, but the money is still up on the screen.

Cameron wisely hired Stan Winston Studios to do the visual effects, which remain impressive and not just because we know they were done on the cheap. There are those that might argue that some of the model work, stop motion photography and animatronic Schwarzenegger heads don't hold up. I beg to differ, but that may because I tend to prefer visual effects that are practical and tactile (though, to be fair, the CG in Terminator 2 represents some of my favorite FX of all time). Even the future of 2020 as presented here in the opening moments remains more powerful with just a few endoskeleton models, some ships, some lasers and a few dozen skulls than any of the CGI in the last two Terminator films. It's like comparing Star Wars to the prequels: less is more because we know where to look and just a few images can stand in for a much bigger story existing just outside the frame.

How good is The Terminator? It's so good that it has survived three bad sequels, at least two of which were essentially remakes of the same story. It's one of my favorite action movies of all time and one of my favorite movies of the '80s. It made possible the careers of both James Cameron and Arnold Schwarzenegger, and movies are better for having both. It is a perfect movie in that it is an engine that perfectly does what it sets out to do. It is relentless and exciting, imaginative and executed with expert efficiency. James Cameron has done bigger in a number of films, but he has never done better.