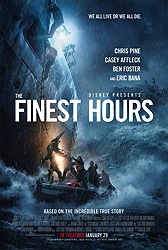 This is the type of movie Wolfgang Petersen would have directed if he still made movies.

What I mean by the lead sentence is that The Finest Hours is a workmanlike sea-faring adventure that is certainly OK but nothing altogether memorable. Ever since seeing this movie I’ve been calling it the “It’s Fine”-est Hours. While not without some aspects to champion, the movie on the whole doesn’t quite work. Curiously enough, it has more to do with its technical aspects than storytelling ones. This doesn’t often happen. Most film crews are so talented and skilled that even when a movie doesn’t work, it’s usually not because of poor filmmaking but rather an inferior creative vision or poor execution. In the case of The Finest Hours, simply put, the storm looks so phony that it becomes impossible to become invested in the drama of the story.

The plot in brief: The Finest Hours tells the story of a blizzard that struck the East Coast which ripped an oil tanker off the coast of Cape Cod in half. Four members of the Coast Guard set out to rescue the crew of the rapidly-sinking vessel. 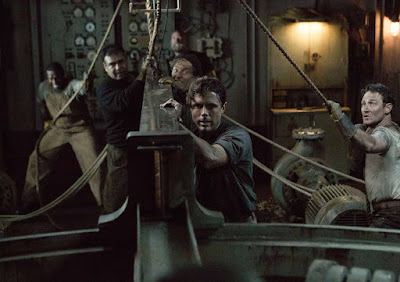 I was on-board with the movie for the first 30 minutes or so, which is the section that introduces us to the characters (including Chris Pine as the leader of the group of Coast Guard members who charter the rescue mission, Casey Affleck who plays one of the ill-fated crewmen of the distressed oil tanker and Holliday Grainger as Pine’s love interest, a plucky girl who wants to see her man returned home safe and sound). This section is the most compelling because the cast is appealing and the characters they are playing are predominantly nice people. The biggest thorn in everyone’s side is the leader of the Coast Guard personnel, played by Eric Bana, but even he has his reasons for being the way he is. He might not be the most audience friendly character in the film but we certainly don’t blame him for making the call that he makes to send out Pine & co. to save the crew of the oil tanker. The first act is also the section of the movie where you can fully appreciate the circa 1952 costumes (by Louise Frogley) and production design (by Michael Corenblith) which have a lived-in appearance while at the same time having an appealing only-in-the-movies look to them. 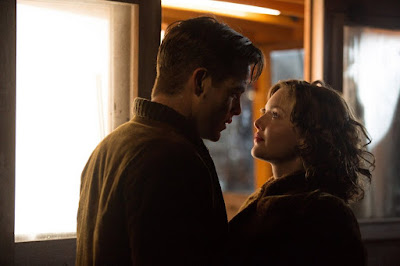 If I have any complaints about the acting, it’s that the actors are underutilized. Invaluable character actors like Ben Foster and John Ortiz are relegated to mostly expository and “stuff” work (this is a movie where much of the time people are frantically going around doing “stuff” on boats and only sometimes is it interesting) instead of having strong character beats like we’ve seen them have in other movies and know that they’re capable of. Holliday Grainger looks great in period costume but doesn’t really register and the lead, Chris Pine, curiously chooses to underplay his role, which for the sake of a movie like this might not have been the best choice despite it possibly being closer to the truth of what the real-life guy, Bernie Webber, was like. This is a movie that screams for an outsized, larger-than-life, scenery chewing performance at its center and it comes across as flat without one. It’s not helped that Affleck is also playing things very low-key.

But, as I alluded to before, the action sequences are pretty terrible. They look and feel completely unrealistic and inorganic. Cast members are clearly on real boats in front of green screens while water rains down on them and as a result hardly any of them seem as scared or in-duress as they should be. Most of the storm sequences are monotonous (how many times can we see a small boat just barely make it over a big wave?) and the wide shots are all clearly CGI. I understand that this is probably the only way to make this movie and have it not be a $100 million plus production but still…it just looks so damn fake. 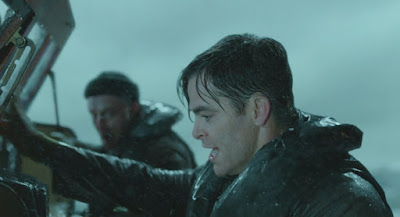 The Finest Hours was directed by Craig Gillespie (Lars and the Real Girl, the Fright Night remake) and I’ve not yet warmed to any of his movies. If you have, perhaps you’ll be a bigger fan of The Finest Hours than I was. I was somewhat looking forward to the movie but came away underwhelmed and it doesn’t help that the movie ends on a limp, rather than triumphant, note due to a very, very corny ending. Again, I’m not sure if this is how it happened in real life, but if it was, it might have been better to take some creative license, pump up the drama and drain the schmaltz.

On second thought; maybe I’m being too hard on the likes of Wolfgang Petersen’s sea movies like Poseidon, The Perfect Storm and Das Boot. All of those are better than The Finest Hours.
Posted by Patrick Bromley at 5:00 AM