The Pope and this terrific film go way, way back. 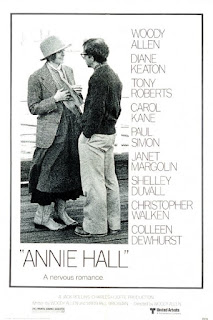 Annie Hall is a groundbreaking film, both in the history of the medium and the career of Woody Allen. Although many moviegoers might still prefer his “earlier, funnier films” (as he himself referred to them in Stardust Memories) Annie Hall is the Papal Line of Demarcation when it comes to film comedy. There exist all comedies made before Annie Hall and all of those made after. It’s that important a film.

The Plot In Brief: Stand-up comedian Alvy Singer (Woody Allen) reviews his life in an attempt to figure out what went wrong with his recent relationship with Annie Hall (Diane Keaton). The audience is treated to a parade of scenes from Singer’s life, but always through the lens of his relationship with Annie. 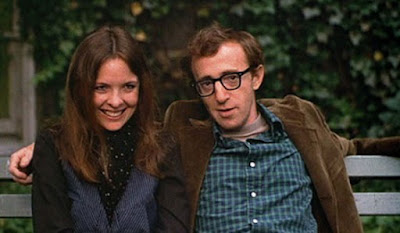 The film as we know it almost didn’t happen. Annie Hall began its life as a very different film titled Anhedonia that explored Alvy’s inability to experience pleasure. All of the building blocks of the finished film were there, but not the structure and dominant narrative. As ace editor Ralph Rosenblum describes in his seminal book, When The Shooting Stops, The Cutting Begins, he helped Allen shape the narrative into a cohesive whole, ordering all of the disparate material to best serve the “Annie Hall” storyline.

What a smart move on the parts of both Allen and Rosenblum: the process yielded a relatable film that isn’t just a disjointed series of gags. One could argue that Allen’s whole career is marked by a movement towards a more mature, naturalistic storytelling (Manhattan, Crimes and Misdemeanors, and Midnight in Paris) and away from the semi-random series of jokes around a theme (Take the Money and Run, Everything You Ever Wanted To Know About Sex, and Bananas). Annie Hall certainly has jokes—some of the funniest in Allen’s career—but here they are made to serve a cohesive narrative that also has some trenchant things to say about adult relationships. 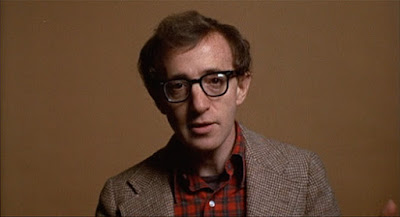 I love how the style of the film itself changes as the narrative progressives. We begin with a screen-filling close-up of Allen, speaking to the audience as a stand-up comedian might, handling exposition chores through direct address. As the film moves on, we get less and less of Allen the comedian and more of Allen the filmmaker; we end on a beautiful, evocative shot of an empty restaurant window with only Allen’s narration in voice-over. I believe this shift is a handy metaphor for the metamorphosis this film represents in Allen’s own career, from jokester to assured filmmaker in a brisk 93 minutes. 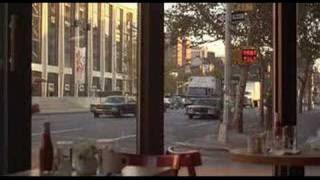 The Pope has told the story before about how young and impressionable he was when he first saw this film. As I wrote some years ago, “At thirteen I had never kissed a girl. Yet I was only a year away from seeing Annie Hall, one of several films that would change my life – [enjoying nothing but bad movies] helped make my Annie Hall epiphany happen. ‘Maybe I’m better than this’ was my first step toward thinking, ‘movies can be better than this’ —so that when I was finally old enough to happen across one that really was better, [in this case Annie Hall,] I was ready for it to bust me open.”

Let’s face it—very few comedies are adult. It’s no wonder film critics and the Oscars often consider comedy to be “kid stuff.” With the exception of black comedies like The Apartment and Dr. Strangelove, comedies often dwell on the mindless and the silly. I am not talking about the skills required to create successful comedies; I agree with the old maxim that “comedy is hard.” I am suggesting that the stuff of comedy is generally immature and almost childish, and it is the (increasingly) rare comedy that can make us laugh and make us think… about something other than flatulence or falling down. 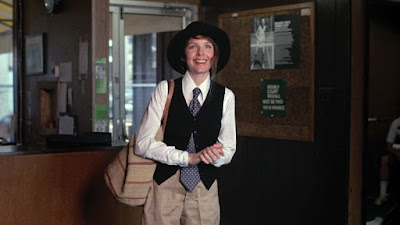 Diane Keaton’s performance in Annie Hall is the anchor that grounds the whole enterprise in reality. She is playing such a specific person that she becomes a stand-in for every girlfriend, every object of love, or every manic-pixie-dream-being that ever was or ever will be. That is how it often happens in art, and that is one of the biggest mistakes movies (especially movie comedies) make in characterization: a character written as generic to appeal to everyone will appeal to exactly NO ONE. We don’t treasure our lovers (or friends or family) because they’re blanks—we love them because they’re themselves. Learning to navigate their specificity is what love is.

Certainly Annie’s unique fashion sense was based on Keaton’s own (and may be the one aspect of the film that dates it) and Allen and Keaton had dated in real life, but nothing in Keaton’s previous films (not even her previous films with Allen) revealed her to be such an effortless, gifted comedian. We get hints of this later Keaton in Play It Again, Sam and Sleeper, but her performance in Annie Hall was a leap into the iconic and unforgettable. She sings nice too. 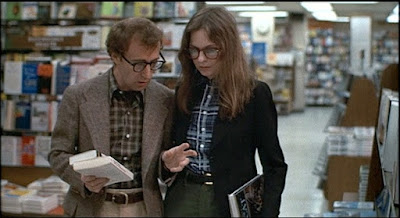 Annie Hall’s Three Miracles: That all the ingredients here came together so perfectly: script, performances, direction, and editing; Diane Keaton’s performance as Annie, which is something to treasure; and the scene in which Woody Allen first tries cocaine, which sparked the loudest and longest audience laugh I have ever heard in a movie theater to this day.

Annie Hall is one of the best comedies ever made, both tremendously funny and slyly profound. You may never know anyone exactly like Alvy or Annie, but they’re so relatable, they’ll break your heart a little. You’ll just be laughing so much you won’t mind.