Glutton for Punishment: The Deadly Bees

The Deadly Bees exists only to prove that Alfred Hitchcock is a master filmmaker, and his film The Birds is a masterpiece.

We are all interested in bad movies, inexcusable cinema, artless art, and murder bees, for these are the interests we use to while away the time while we wait for the autopsy results. You are interested in the unknown, the mysterious, and the honey-producing—that is why you are here. And now, for the first time, we are bringing to you the full story of some of the worst movies ever made. We are bringing you all the evidence, based only on the secret testimony of the miserable soul who survived the attack. I am that miserable soul. The absurdly low budgets, the cramped soundstages, the ridiculous plots, the risible acting by innocent insects—my friend, we cannot keep these a secret any longer. Let us punish the guilty. Let us reward the innocent. Remember, my friends: coordinated attacks by specially-bred, giant killer bees will affect you in the future! 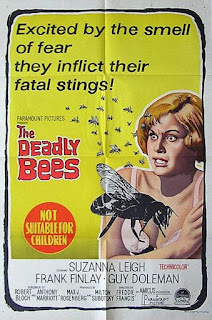 1966’s The Deadly Bees was clearly made in the shadow of Alfred Hitchcock’s massive 1962 hit The Birds. It’s as if the producers approached screenwriter Robert Bloch with the 1941 novel A Taste of Honey and said, “Make this the same kind of thing as The Birds, only worse.” In The Birds, rich and irrepressible party girl Melanie Daniels travels to a remote seaside location seeking romance and adventure with Mitch Brenner (Rod Taylor) and birds start inexplicably attacking humans. In The Deadly Bees, talentless and devil-may-care pop singer Vicki Robbins (Suzanna Leigh) travels to a remote seaside location for her health and bees start explicably attacking humans. Both Melanie and Vicki are tall, cool, dumb blondes who end up attacked by the titular creatures in their respective films.

The Plot in Brief: Vicki Robbins (Suzanna Leigh) is an exhausted pop star whose doctor orders her to rest at a remote English island. She stays at the manor of Ralph Hargrove (Guy Doleman), an angry, distant gentleman who tends beehives as a hobby. Ralph and his wife Mary (Catherine Finn) clearly hate each other. Soon (actually not that soon) Mary’s dog and then Mary are stung to death by bees. All eyes turn to the taciturn Ralph. Meanwhile, Vicki meets another beekeeper on the island, the friendly and helpful H.W. Manfred (Frank Finlay) who explains that Hargrove is secretly breeding giant killer bees and training them to attack his enemies. Or IS HE? 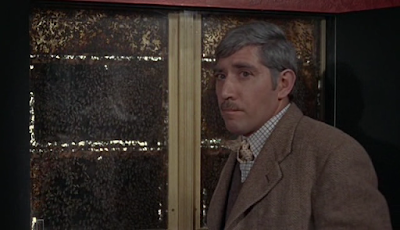 In The Birds, Hitchcock gives us a brooding, disturbing meditation on nature, the inexplicable, and the unknown. We never find out the cause of the bird attacks; that is part of the film’s power. The Deadly Bees gives us a simple whodunit where the mystery could easily be solved in ten or fifteen minutes by anyone paying attention. If the narrative lacks sophistication and wit, if the characters are cardboard cutouts designed to be knocked over, and if the suspense sequences are amateurish and unintentionally funny, then why are we here? Ultimately, The Deadly Bees is a pissing match between two rival, boring beekeepers—surely the stuff of classic cinema.

Because Tippi Hedren is memorably attacked at the end of The Birds, the filmmakers behind The Deadly Bees serve up a similar sequence, only here Suzanna Leigh has stripped to a mere bra and slip. I realize that The Deadly Bees is an exploitation film, but that’s no excuse to be just plain mean to the leading lady. At best, this scene is a ripoff of Alfred Hitchcock’s earlier Psycho, with its then-taboo depiction of a similarly-clad Janet Leigh; at worst, the filmmakers are offering up a smorgasbord to the type of skeevy misogynists who may enjoy watching a woman receive multiple bee stings on her breasts. Excuse me while I take a long, bee-free shower. 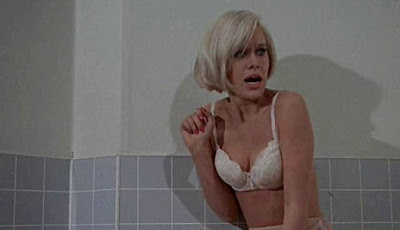 I have written in a previous column that modern audiences find the special effects in Hitchcock’s The Birds to be laughably outdated. The special effects in The Deadly Bees make those in The Birds seem like state-of-the-art CGI. I have never understood the hipster laughter that sometimes accompanies a Birds screening; I secretly suspect that it comes from emotionally stunted viewers defending themselves with a protective layer of irony because The Birds is making them feel uncomfortable. To those audience members who believe the effects in The Birds are quaint or antiquated: I would love to see your reaction to The Deadly Bees. Please record yourself watching The Deadly Bees, then send me that recording, so I can watch you derisively snort PBR into your mustache wax.

For most of the bee attacks, the dedicated special effects artistes behind The Deadly Bees glue one or two patently fake bees to the actor’s face, then use an optical printer to add more bees. They would have been better off filming through a glass fish tank filled with live, buzzing bumblebees. Because the camera cannot focus on two different layers of action, the optical bees in the foreground are blurry and cartoonishly yellow. The camera trick fools no one and pulls us out of the reality of the film just when we should be the most emotionally invested. 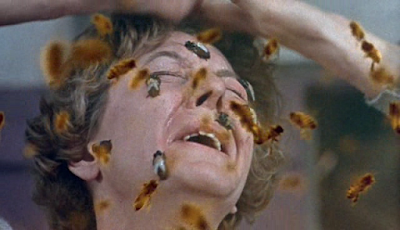 The interweb tubes tells me that the MST3K gang filmed an episode where they poke fun at The Deadly Bees during its entire, interminable 83-minute running time. I am anxious to see it! Only laughter can redeem this movie. Laughter, and a paste made of baking soda.

My friend, you have now read this column, based on my own sworn testimony. Can you prove that this film doesn’t exist? Perhaps on your way home, someone will pass you in the dark, and you will never know it, but he or she may be A GIANT, DEADLY BEE. Many scientists believe that bad movies are being filmed at this very moment. We once laughed at fire, the wheel, gravity, the horseless carriage, the telephone, the electric light, and pollen. So much laughter! And now some of us laugh at very bad movies. God help us in a future shared with bees.

Email ThisBlogThis!Share to TwitterShare to FacebookShare to Pinterest
Labels: glutton for punishment, insect movies, the birds, the deadly bees