This is an awful movie. I love it.

Encino Man doesn’t have much going for it. It’s not particularly well directed, it’s not shot creatively, one of the actors is incredibly annoying, and the premise is the same fish-out-of-water story that you could find in a hundred better movies. Yet there’s some core to it that keeps me coming back over and over again. For the life of me, I don’t know what it is. Maybe I’ll be able to tell you by the time I wrap this column up. 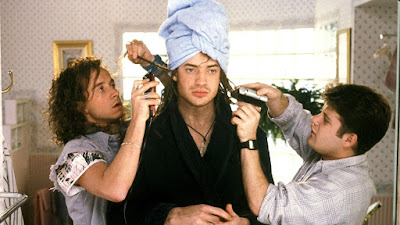 Encino Man is about two friends (Sean Astin and Pauly Shore, who I will never buy actually hang out together) who find a frozen caveman in their back yard. They thaw him out, dress him up, teach him to speak American, and turn him into the wild man of their high school. Along the way, they learn a little bit about themselves and a whole lot about life. GAG.

If you haven’t seen this movie, you’re lucky. No, I’m just kidding (mostly). It’s worth a watch if only to see a younger Sean Astin in a leading role. Astin is always watchable for me. I mean, he was the lead Goonie, right? He also went to hell and back with Frodo as Samwise Gamgee in Peter Jackson’s The Lord of the Rings trilogy and was one of the high points of those three films. For people who like football, he was Rudy. Heck, he’s a Ninja Turtle now. Sean Astin is a national treasure.

For all intents and purposes, Encino Man is the major movie debut of Brendan Fraser. I look back on Fraser’s career with some sadness now because he seems to have fallen on some pretty hard times, but turned in some pretty fantastic performances over the years. Watch movies like The Mummy, Gods and Monsters, With Honors, or even Blast from the Past for some of his better work. Still, the man who would one day be George of the Jungle let us know pretty early on that he wasn’t opposed to making an idiot out of himself on film, and he made his cinematic splash in a loincloth covered in mud barking at a garbage truck. 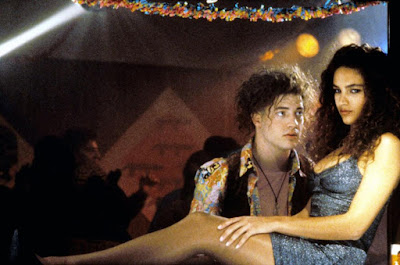 I have never been bitten by the Pauly Shore bug (there’s a vaccination) and I don’t really like him in any of his other movies. I didn’t often watch his show on MTV back in the day (Totally Pauly) and I don’t think his stand up is funny. Yet I really enjoy what he brings to this movie. You have no idea how embarrassed I am about the sentence I just wrote. It’s almost like his moronic brand of effeminate mumbling stoner comedy takes a silly movie and pushes it into the realm of absolute absurdity, thereby making it so bad that it’s good. He calls himself the weasel, and he’s got weird nicknames for everything. He’s not eating; he’s munching on some grindage. He doesn’t drink; he wheezes the juice. It’s absolutely insane, but I swear to you that I saw this movie with MY MOM in 1992 and we talked like Pauly Shore for months. She would say “time to come down for dinner, bu-uddy.” And I would say “Awwwoo, weasel!” And we would click our fingers together like Pauly Shore and Sean Astin do in the movie. For years, I called boobs “gonzagas” because of this movie. WTF?!

We also get a performance from Robin Tunney, who does a good job with what she’s given. In an even smaller role is Data himself, Jonathan Ke Quan. It’s a mini-Goonies reunion! Presiding over the whole affair is director Les Mayfield, who sounds like a blues guitarist but is, in fact, just a family film director. Mayfield got his start directing behind-the-scenes documentaries for films like Back to the Future and Empire of the Sun before moving on to direct movies like Flubber, the Martin Lawrence movie Blue Streak, and the mediocre-but-watchable western American Outlaws. Even though his budgets kept getting lower and lower, the profits of each movie he made got smaller too. After three box office flops in a row, it looks like he was put in movie jail. 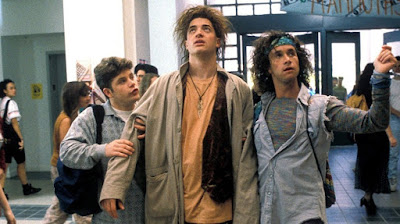 There are so few things in this movie that my critical faculties are willing to accept. The acting is not very good. There’s an earthquake scene where Sean Astin wakes up in bed and realizes his room is shaking, but it’s directed so that he’s miming being in an earthquake before we actually see the earthquake. This is a strike against both the directing and the editing. And did I mention the science is ridiculous? What lip service they pay to science makes no sense whatsoever. We’ve got a frozen Neanderthal in the baking California sun, and he’s not dead, but in suspended animation. You know what? I don’t even care. I can go with it. It’s a party movie. We’re having a party, right? So let’s stop thinking so much and just have a party.

Believe it or not, Encino Man was a pretty decent hit back in 1992, financially besting dozens of far superior movies at the box office. Clearly I am not the only one who was drawn to this movie. Maybe it’s the innocent sweetness of it all. You don’t have to reinvent the wheel, you just have to tell a story that allows us to escape from our own troubles for a couple of hours, and Encino Man definitely does that. It tells us that everything is going to be okay. No one dies, everyone learns from their mistakes, and even the displaced Neanderthal gets a happy ending. I’m starting to see why I like this movie. Sometimes that’s all a movie needs to do: help you escape from your current reality. I watched the movie again in preparation for this article and was astounded by how goofy and mediocre it is, but I still connected to that optimistic core. Honestly, I’d watch it again in a heartbeat. I guess sometimes that escape from reality is enough.