"About a million years from now the human race will have crawled up to where the Krell stood in their great moment of triumph and tragedy. And your father's name will shine again like a beacon in the galaxy. It's true, it will remind us that we are, after all, not God."

Well… maybe not a million years. 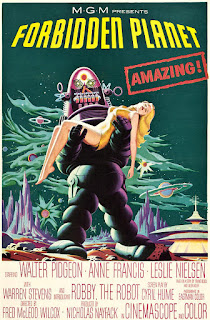 Forbidden Planet is the ultimate boys’ adventure film, in which we throw ourselves into outer space, land on an alien planet, confront a gruff father figure, play with cool robots, fall in love, shoot laser guns, fight a terrible monster, grow up, and return home all the wiser. I can think of better films (and a few better sci-fi films) but I honestly can think of no other film that is this much goddamn fun. The production design, the costumes, the performances, the central idea, and the special effects all combine for a unique experience that (because of its consistent, retro look and flavor) never really dates. This film exists to make us all shout, “Gee whiz!”

The Plot in Brief: Commander John Adams (Leslie Nielsen) and the crew of the C-57D spaceship arrive on planet Altair IV on a mission to determine the fate of the spaceship Bellerophon. Dr. Edward Morbius (Walter Pidgeon) and his daughter Altaira (Anne Francis) are the only survivors of the previous mission; with no one else on the planet, Morbius has fashioned a mechanical helper, Robby the Robot, to do the heavy lifting. Morbius explains that a mysterious planetary force killed everyone else. He senses that Adams and his crew are in great danger and warns them to leave. 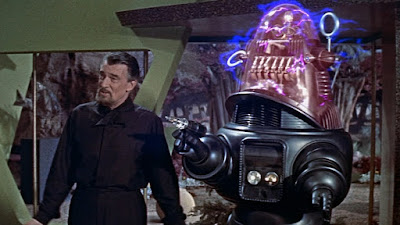 One night, an invisible foe attacks the C-57D, killing crewmen and sabotaging the ship. The next day, Morbius tells Adams of the Krell, the race that previously lived on Altair IV. The Krell were so advanced that they built a Great Machine that could materialize anything they imagined. That night the ship is attacked again. Will the crew of the C-57D be able to leave the planet alive? What is the invisible force that continues to attack the ship?

Many critics—including Bill Warren in his indispensable book Keep Watching the Skies—accuse Walter Pidgeon of just “phoning it in,” as if he was so mortified to be playing in a “kiddie picture” that he sleepwalks through it. I disagree. Pidgeon was an intelligent, intuitive, nuanced actor. Could his mannered, low-key performance be meant to suggest that Morbius is super-smart, has an inkling about what is causing all the commotion, and is trying to sublimate his own rage?

MASSIVE SPOILERS FOR FORBIDDEN PLANET: So many movies are about nothing or nonsense that I give Forbidden Planet high marks for being full of ideas. The whole idea behind the Krell society being so advanced technologically that they could materialize thoughts and concepts is magnificent, certainly on par with the matter transmitter in The Fly movies. Unfortunately, Morbius learns too late that manifesting thoughts has its darker side, as his id becomes a rampaging monster that kills anything and anyone that Morbius dislikes. The way in which the Id Monster is portrayed in the film is clever; it remains invisible until three-quarters into the film, when the filmmakers finally allow us to see it. How to visualize the id? The special effects department farmed out the job to the Walt Disney studios, which used animation to present Morbius’ Id Monster onscreen. The sequence is scary, exciting, and one of the most iconic images in all of 1950s cinema. The creature even looks a little like Morbius. Terrific.

The more I meditate on Forbidden Planet, the more I realize that our modern society has actually been able to make the Krell vision a reality through the internet. Is not “Amazon.com” a reasonable facsimile of the Great Machine? I dream of having an item, I go online, and in some cases I have it in my hand the same day. It’s magic! What, then, of the dark side of the Krell machine? We find that in the horrible, anonymous, and insensitive troll attacks on message boards; in “revenge porn”; and in online bullying that preys on the young and vulnerable. We are the Krell.

It’s no secret that Forbidden Planet is based on Shakespeare’s The Tempest with Morbius filling in for Prospero, Altaira for Miranda, Robby the Robot for Ariel, and the amazing Id Monster taking the part of Caliban. As it stands, the movie is one of the most thoughtful and thought-provoking Shakespeare adaptations ever attempted. Forbidden Planet explores many of the same themes (the duty of a father to his daughter, the exploitive nature of exploration, and the limits of magic, to name just three) but adds a few of its own. It is both based on a previous thing and its own thing. Some films have a problem being anything at all.

The greatness of Forbidden Planet is such that Your Pope has taken pilgrimages in his life to 1) see the film in a real movie theater on a big screen, 2) witness Anne Francis introduce said film (Baxter Avenue Cinemas, Louisville, Kentucky, June, 2001), and 3) travel to Hollywood with friend-of-the-site Miguel Sanchez to attend the Famous Monsters of Filmland Convention and touch the real Robby the Robot (I had to reach under the velvet rope to do it, but even a Pope needs to break a few rules sometimes.)

Forbidden Planet’s Three Miracles: a thought-provoking script based loosely on the Bard; the best robot in the history of movies; and the Monster from the Id, a rare and singular creation from the Disney Studios in a non-Disney film.