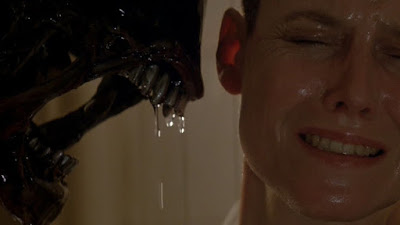 It's Prison Day and all hell is breaking loose.

...Or people are being slaughtered anyways. Why? Because Alien³. That's why.

I introduced myself to the F This Movie! community just over two years ago with a brief "all about me" piece in which I proclaimed my love for the film that doesn't seem to get much love.

As the third installment in the trilogy, comparisons to it's predecessors are inevitable. Ridley Scott's Alien, an almost traditional “haunted house” stylized film, applied the dramatic pacing that had us on the edge of our seats. With its breakneck pacing, gunfights and explosions, James Cameron's sci-fi action sequel Aliens is one of my favourite action movies, but I found it lacking in that conventional horror that draws me in, whereas David Fincher's Alien³ is a grim psychological horror about life, death, sin and redemption and is an amazing character film. 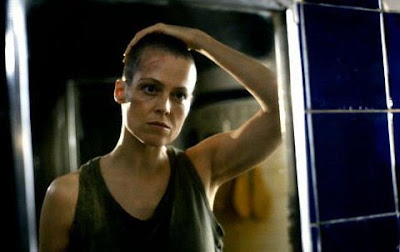 Ellen Ripley's (Sigourney Weaver, of course), shuttle crash lands on Fiorina 161, a remote, maximum-security prison planet, where the facility is run and maintained by a skeleton crew of inmates and staff, none of whom have seen a woman in years. A stowaway alien (dunh dunh dunh), has invaded the prison and, while awaiting her rescue shuttle, Ripley and the men must set aside all the bullshit and fight for their survival. I'll leave it as a simple plot outline, as the storyline is not what brings me back time and again.

(I also won't bother going into the pre-production of the film and it's quite in-depth history of re-writes, stylistic changes, studio interference, and how its eventual director came to be. Wikipedia can fill you in much better than I.)

This was David Fincher's feature directorial debut, and his characteristic style, low camera angles, filtered colours and stark lighting are all present and accounted for in Alien³, reminiscent of Zodiac and Se7en, another two films that I love love love.

The film is infused with brown tones, everyone and everything is dirty (bound to happen on a wasteland of a planet) and there is a shit-ton of industrialized machinery that in and of itself could do a lot of harm. Sounds beautiful, right? HA Well, it is, and I found it set the scene perfectly, leaving the characters to be the roses that bloom through all the dirt and grime. It's a beautiful movie, sometimes reminding me of Mad Max. 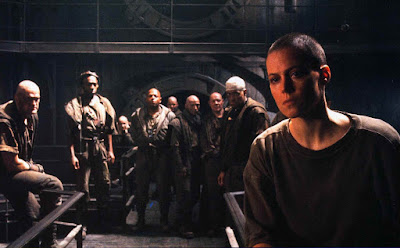 I find that the film epitomizes everything that an Alien movie should be: fear, confusion and death with the constant underlying threat of the creature itself. The very fact that the film begins by killing off two characters from the previous films shows that Fincher is not afraid to sacrifice the characters. In a true horror, sacrifices must be made. The gradual decline from order to brutal anarchy is both subtle and horrific and I find that Lord of the Flies keeps popping into my mind in a weird, twisted science-fiction-y twist to the tale.

Charles S. Dutton plays Dillon, one of the prison's inmates, who has maintained peace in the facility as the spiritual and effective leader amongst the men. He exudes confidence and his solemn musings on death, particularly the eulogy given for Newt and Hicks, help to bring some of the best interactions between he and Ripley out. Charles Dance is Johnathan Clemens, and perhaps my favourite character in the movie. A former doctor, he wound up as an inmate at the prison after accidentally administering the wrong dose of medication and killing several people. He served his time and then stayed on to serve as the facility's doctor. Even though there's dishonesty between the two, and they each know about it, he and Ripley share moments brought about by their common loneliness and this scene and it's accompanying moments that stand out most in my mind.

We are also introduced to a new kind of alien! A quadruped, having been “born” from a dog (or an ox, depending on which version you watch). This four legged creature seems all the more menacing to me, as it opens my mind to a billion of other combinations of the alien. 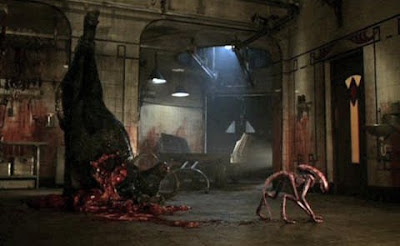 And Ripley. With the aliens having taken away her chance at a happy life more than once, this time it's about revenge. The personal connection is solidly stated: “You've been in my life for so long, I can't remember anything else.” And I feel that the ending ties everything perfectly together, and honestly; just as the logo for the film shows, they have come full circle. Ripley and the Alien ending together. (Oh yeah, Spoiler!)

I find Alien³ to be fundamentally a story about hope and the putting aside of differences to work together to achieve a common good. This film is about redemption. In a beautifully dark and ass-kicking way.