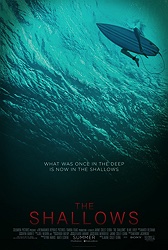 I would love to love the new shark horror movie The Shallows and many people do. Most are saying it is the best shark movie since the original Jaws. I’ll take Deep Blue Sea or Open Water over this one, but calling The Shallows the runner-up is not too much of a stretch. The problem is that Jaws casts such a big shadow over any other shark movie that it’s almost impossible to not compare its imitators to the Steven Spielberg’s 1975 classic. Fair or unfair, pretty much everybody watching The Shallows has to have Jaws on their mind. 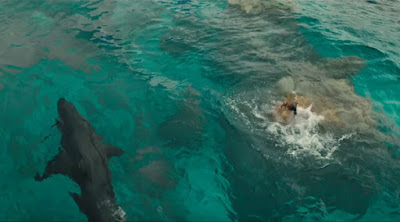 On its own B-movie terms, The Shallows is okay. But this summer, "okay" has somehow become the new good merely because there have been so many tentpoles and blockbusters that are just plain bad. I love what The Shallows represents, which is a low-budget genre movie, and I hope it’s successful because that could mean more of this type of movie in future summers. The flood of sequels shitting the bed at the box office will have to cause Hollywood to take smaller gambles and try to produce original content for a while. Then again, the success of The Shallows could just signal that there will be The Shallows 2 two summers from now. Hollywood tends to learn the wrong lessons.

Blake Lively is front-and-center in The Shallows playing a surfer marooned in the shallow end of the ocean while being circled by a shark. That’s pretty much the plot of this movie. Some care is given to adding some emotional backstory to Lively’s character (her now-deceased mother surfed this same beach when she was pregnant with Lively) but the movie weirdly tries to parallel the mother’s fight with her illness with Blake Lively’s characters’ fight to survive the shark attack. They're two very different things and I think that’s why the emotion falls flat. If you have a terminal illness and you fight it, that’s brave. No question about that. If you decide that “No, I will not let this shark eat me,” that’s common sense. It’s not bravery to fight to survive a circling shark. What is your other option? Jump in the water and let something eat you alive? I don’t care how crazy you are, no one would choose that. Because the movie tries to work as a drama (many have compared The Shallows to 127 Hours) this presents a major problem. If the movie was steadfastly a thriller or horror movie it wouldn’t have this sense of flatness for me. 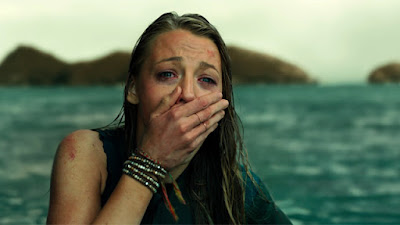 As a thriller, the movie doesn’t work all that well either. There are two reasons for this: 1) the shark looks fake more often than not and 2) even at 87 minutes the movie is too long. Not enough happens in The Shallows. It takes place over the course of around 24 hours, but really the plot points of this movie don’t call for more than a 30 minute short in a horror anthology. If this was distilled into a segment in Creepshow (kind of like "The Raft" in Creepshow 2) it would be an all-timer, but instead we’re subjected to a lot of dead air. Think about it. Why do the attacks in Jaws work as well as they do? Partly, I think, because they’re short bursts of action. It also doesn’t help that the CGI shark in The Shallows looks Anaconda-level bad but without that film’s silliness. There are some shots (that are probably real sharks) where we see the shark or just the fin from overhead  and those work, but any time the shark comes above surface or is attacking Lively head-on it is so artificial that it sapped the suspense right away. A mechanical shark over a CG shark is passé these days, but that’s just one more reason why the movies of today are not as good as the movies of the past. It’s something between the lines. An actor can still freak out if a mechanical, tangible shark is coming at them but they have to work overtime to make reacting to a tennis ball on a stick or a blank space land.

It’s not all bad, though. I liked Lively’s interplay with an injured seagull, who is also marooned on the rock she’s stuck on, but that’s maybe five minutes of the movie altogether. It’s memorable, but not enough to save The Shallows. I also thought Blake Lively’s performance (which is very physical) was really solid as well. She’s friendly and intelligent, which makes it easy to root for her. The actress hasn’t been this good in a film since The Town. Being a fan of director Jaume Collet-Serra, I feel bad that I was so let down by The Shallows. Not to pat myself on the back, but a lot of people have been sleeping on this guy and it feels like The Shallows is finally the movie where some are taking notice. He directed the House of Wax remake which is just ok but amazing at certain points (particularly the finale), Orphan which is a terrific and off-its-rocker horror movie and the super underrated action film Run All Night, the best of his three Liam Neeson movies. I think The Shallows is the Coke Zero version of this guy’s abilities. That aside, I hope this movie is a massive success for him and he keeps getting work. Underrated is a word created for filmmakers like Collet-Serra. He is a terrific technician with quirky sensibilities. 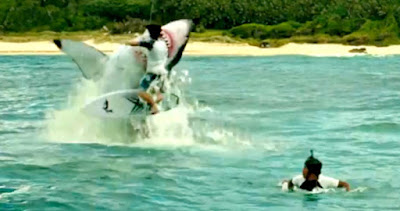 To end on a positive, I will say this: The Shallows is almost worth seeing just for the final confrontation between the shark and Blake Lively. It’s nutty and awesome and sent me out of the theater liking the movie slightly more than I did as it was unfolding. As I said at the top, I want to love The Shallows. But right now I feel like I deserve something better than just okay.
Posted by Patrick Bromley at 5:00 AM