Riske Business: Why The Lobster Really Bothers Me

It’s basically if Her was made by someone who hates life.

Note: This column will have light spoilers.

The critical majority and a few great people from the F This Movie! community really dig the new movie The Lobster from writer-director Yorgos Lanthimos (who directed the buzzed about Dogtooth from a few years ago, a movie I have not yet seen) and yet I find myself really rejecting it. I have my reasons, which will be the crux of this article (you’re still in the Gripehouse), but I want to point out what I find effective about the film first. It’s well-made on its surface. It’s confident and professionally put together. I also think it’s the work of an auteur and a provocative filmmaker. Lanthimos has a singular voice and point of view and for that he should be commended. And that’s about all I’ll say positive about this movie. 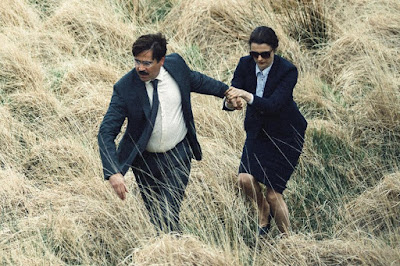 I found it to be one of the most depressing experiences I’ve had in a movie theater in a long time. Let’s start there. This movie is bleak. It’s dystopia and admittedly this is a sub-genre of sci-fi (outside of Blade Runner, which I see as a hopeful movie at its end) that I normally do not like. I think it’s easier for filmmakers to despair over the future than to posit that it actually could be something worthwhile. The ground is well-tread already. Does that The Lobster have some interesting ideas about courtship, relationships, being a loner and societal paradigms and expectations? Of course it does. But it’s also a movie that revels in its despair (especially in its second half) and I think provokes audience in a smug way since the movie is rarely played straight and is instead rooted in absurdism and irony. The Lobster thinks it’s very clever and will gladly go out of its way to remind you of that. This would be fine if it had any interest in saying anything but “the world is shit.” Watching The Lobster, for me, was like being on a date with someone I couldn’t wait to get away from. It’s a movie that I think confuses it’s bleakness for profundity.

The Lobster is also pretty sexist in my humble opinion. Every woman in this movie is conniving, evil or bad in some way. Even the ones that aren’t supposed to be this way are inadvertently shitty, such as Rachel Weisz’s character who allows/condones Colin Farrell’s character to do something at the movie’s ending that no one with a heart would allow the other to do. The movie also takes the position that in order for a couple to be together they have to share a common interest which is fine except they show that men are willing to fake that interest in order to be coupled up with particular women. It’s all about the put-upon male, which is a trope I’m fucking sick of in movies, especially relationship ones. It’s like they’re saying “these women are crazy and can you believe all the lengths men have to go through to keep them happy?” I might be a party of one in this complaint, but I sure hope I’m not. It really aggravates me. 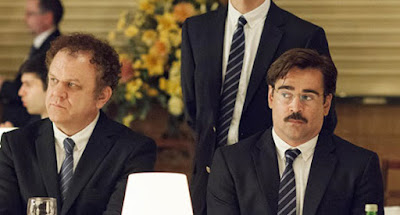 I really didn’t want to write this column but felt compelled to because these feelings have been germinating for the past couple of days. I needed an outlet and luckily I have one available to me. If you like The Lobster, am I saying you’re wrong? No, I’m not. And I’m worried that this column will just get blowback from those who like the movie saying I didn’t get it. I don’t think that’s the case, but I’m prepared to have that conversation. It’s great that a movie engenders conversation in a day and age where so many movies don’t. This is simply just not a movie for me, but that doesn’t mean I want to let it off the hook for doing things I think are wrong-headed and harmful. It really grinds my gears.

To those who have seen the movie, what do you think? For those who haven’t, are there any movies you’ve seen that are widely acclaimed but just rub you the wrong way?
Posted by Patrick Bromley at 5:00 AM