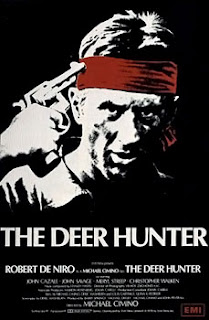 As might seem appropriate on this day after July 4th, we examine a film that asks many difficult questions about America and is not content with patriotism or platitudes. The Deer Hunter offers answers that many Americans are not willing to entertain.

The Plot in Brief: Michael (Robert De Niro) works in a Pittsburgh steel mill with friends since childhood Nick (Christopher Walken) and Steven (John Savage). Steven is due to be married before he, Michael, and Nick leave to fight in Vietnam. The wedding party also includes Linda (Meryl Streep), Stan (John Cazale), and John (George Dzundza). After the wedding reception, the men go on a final hunting trip before they ship out.

In Vietnam, Michael, Nick, and Steven are captured by the Viet Cong, who pit the prisoners against each other in cruel and grueling matches of Russian roulette. After a daring escape, Steven suffers a tragic injury and returns home. Michael also returns home and wonders why Nick has not yet returned. Michael then returns to Vietnam to search for Nick.

Five months ago, I recorded a podcast with Patrick on this very film. It was during the run-up to the podcast and my subsequent rescreening of the film that I began to truly see the film’s brilliance: in the scope of its story, in its cinematography, in its unparalleled performances, in its editing, and ultimately in the nuanced and ambiguous nature of its message. You can hear me making a case for the film’s masterpiece status here.

The film was very controversial when it was originally released. American audiences had two main problems with the film: its odd structure and length, and the historical accuracy of its Russian roulette sequences.

The first charge—that The Deer Hunter is too long and too oddly structured—has always baffled me. Even the early wedding sequence, which tries the patience of some viewers, works for me; I’ve never found the film over-long. The structure may be unusual for an American film, but it’s not unusual for a narrative. In his seminal book The Hero With A Thousand Faces, Joseph Campbell suggests that hero narratives from around the world and from different time periods are all basically the same; they share a built-in structure that is somehow inherent to the human mind. Looking at The Deer Hunter through Campbell’s mythic lens, we see it follows that seminal plot: The hero embarks upon a journey that takes him far away (the literal journey being a metaphor for his spiritual journey); the hero engages in a series of adventures, which changes the way he thinks about the world; and the hero returns home with a new consciousness and understanding. In The Deer Hunter, Michael fills the role of our mythic hero; the film follows the exact structure of Homer’s Odyssey.

The second charge—that the Russian roulette scenes are “not realistic”—seems to miss the film’s real point and purpose. American audiences, for the most part, hold one criterion for film above all others: realism. Most Americans want to suspend their collective disbelief and pretend for two hours that what they are seeing on the screen is “real.” Even if the action depicted centers on flying superheroes throwing each other through buildings, the action will be presented as plausible, at least within the context of that specific entertainment.

In this case, because there is no plausible evidence that captive American soldiers were ever forced to play Russian roulette in Vietnam, some viewers reject the film on the grounds of historical inaccuracy. But The Deer Hunter is a fiction; it is an artifice, an illusion. Because it is so well-constructed and vividly realized, it fools us into thinking it is fact, and that any action depicted must, therefore, be based in fact. Yet The Deer Hunter is not a documentary; it is a work of art that explores the subject and meaning of war. It has no more or less a responsibility to this narrow definition of “realism” than does a movie about a statue that can come to life and dance with museum patrons. It pains me that this myopia of American audiences has prevented the art form from growing as it has in some other countries, where audiences are much more accepting of metaphor, symbolism, and allegory. 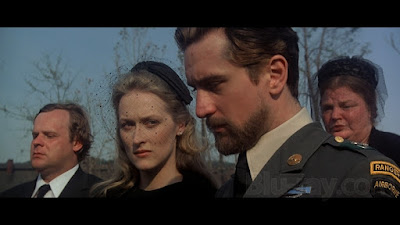 Producer Michael Deeley says it best when he explains, “The Deer Hunter wasn’t really ‘about’ Vietnam. It was something very different. It wasn’t about drugs or the collapse of the morale of the soldiers. It was about how individuals respond to pressure, (emphasis mine) different men reacting quite differently. This film is about three steel workers in extraordinary circumstances. Apocalypse Now is surreal. The Deer Hunter is a parable… Men who fight and lose an unworthy war face some obvious and unpalatable choices. They can blame their leaders… or they can blame themselves.”

Deeley continues, “Self-blame has been a great burden for many war veterans. So how does a soldier come to terms with his defeat and yet still retain his self-respect? One way is to present the conquering enemy as so inhuman, and the battle between the good guys (us) and the bad guys (them) so uneven, as to render defeat irrelevant. Inhumanity was the theme of The Deer Hunter’s portrayal of the North Vietnamese prison guards forcing American POWs to play Russian roulette. The audience’s sympathy with prisoners who (quite understandably) cracked thus completes the chain. Accordingly, some veterans who suffered in that war found the Russian roulette a valid allegory.”

The Deer Hunter’s Three Miracles: The moxie and trust that Universal Studios showed to release such a troubling, ambitious film in the United States; the career-best performances by all of the leads; and the keen eye and assured direction of Michael Cimino who, until his career was sidetracked by the Heaven’s Gate debacle, was an exciting, even revolutionary, director. Rest in Peace, Mister Cimino.