If you're all done watching Stranger Things, watch these movies this weekend! 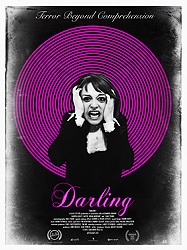 Darling (2016, dir. Mickey Keating) I think this is still one of my favorite movies of the year, but I'm beginning to doubt myself a little after watching Mickey Keating's latest, Carnage Park (his second feature this year!), and having some issues with it. Could I have just been in a trance when I watched Darling? Does it have the same problems as Carnage Park but I was blind to them for some reason? I plan to rewatch it to find out, but I'm scared of doing it. Hopefully I still love it. Hopefully you do too. It's, like, under 80 minutes and gorgeous and features a great Lauren Ashley Carter performance. I'm sure of those things at the very least. 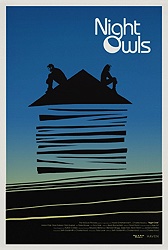 Night Owls (dir. Charles Hood) I saw this last year at the Chicago Critics Film Festival, and like a lot of movies I've seen at that festival over the years, it more or less slipped through the cracks only to surface on Netflix Instant, reminding me "Oh, yeah, I saw that and it was kind of good." This one's basically a two-person romantic comedy starring Adam Pally as a yes-man assigned to babysit the mistress of his boss during her alcohol-fueled meltdown. Rosa Salazar's performance as the girlfriend is the major reason to see the movie; she's funny and sad and sexy and destructive. It's not a movie that's going to stick with you for all that long, but it works for what it wants to be. 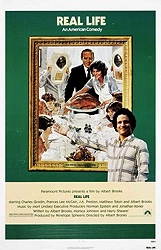 Real Life (1979, dir. Albert Brooks) Netflix recently added all of Albert Brooks' movies, and while I haven't yet had the chance to work my way through all the titles I haven't already seen, I was able to check out Real Life for the first time and -- surprise, surprise after 35 years -- it's terrific. He plays a version of himself as a documentary filmmaker who sets out to follow a typical American family in their day to day lives and make a movie out of it, essentially predicting reality television (and the GoPro camera with the special rigs his crew wears in one of the movie's best running sight gags). Of all Brooks' movies (the ones that I've seen), this one is the most like the short films he used to make for Saturday Night Live. He's the best. 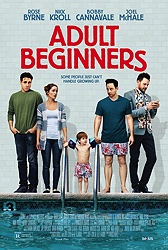 Adult Beginners (2014, dir. Ross Katz) It's been interesting to see comedian Nick Kroll become the star of a bunch of indie comedies. Besides this one, I literally sat through a double feature of Nick Kroll indie comedies earlier this year with My Blind Brother (decent) and Joshy (better). Here he's a sarcastic prick (because that's how Nick Krolls) whose life falls apart, leading him to live with his sister (Rose Byrne) and her husband and son. This is largely a generic indie comedy, but the cast is appealing and it's all done well enough to be enjoyable for those of us with a high tolerance for this kind of movie.
Posted by Patrick Bromley at 12:00 PM