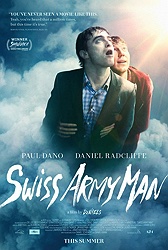 My love for A24 knows no limits. Not even a dead, farting corpse could keep me away from the theater...if anything it drew me to it. I’m talking, of course, about the summer’s weirdest breakout film: Swiss Army Man.

Produced by Miranda Bailey and Amanda Marshall, this first feature from directing pair Dan Kwan and Daniel Scheinert (who call themselves DANIELS) appeared as though it was going to be weird for weird’s sake and nothing more. Oddly enough, that couldn’t be farther from the truth. Dressed in a weird puppet shell of flatulence, bodily fluids, and potentially sophomoric humor, Swiss Army Man cuts through life’s bullshit by adding layers and layers of, well...other shit...to get to universal felt truths of loneliness, fear and death. 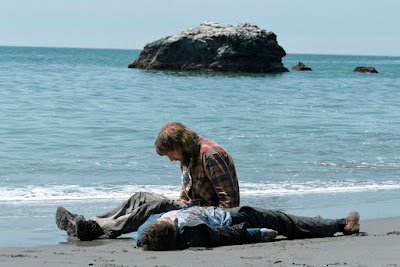 The movie opens with what I’m sure everyone who has seen the trailer or heard of this whacky buddy movie is more than familiar. Hank (Paul Dano) is stranded on a small island. Alone, bored, and hopeless, he is humming to himself as he places a poorly constructed noose around his neck. Seconds before what we assume would be the end of his life, a very dead Daniel Radcliffe washes ashore his lonely isle. Hank, desperate for human contact, settles for his sandy, gassy prize and learns to harness the powers of Daniel Radcliffe’s (later named Manny) decomposing body to his advantage—for anything from a machine gun to a grappling hook to, later, a dear friend. Unlike what you’d get from the trailer, Dano’s character hasn’t totally lost his shit. He gets that Manny is a dead guy on the beach, but when you’re as lonely as he is (and seemed to have been far before he was stranded on an island) anything with even a history of a pulse seems like a viable candidate for friendship.

It’s important to mention that if your ideal movie is one based in realism, makes any sort of sense, or doesn’t play with the fourth wall and is meta as fuck, you should avoid this one deliberately and aggressively. From a logic perspective, the story makes very little sense. We don’t know why Hank is stranded, we don’t know where he and Manny ended up or how (beyond Manny’s jet ski force farts) and we don’t know for how long they’re in the wilderness. And I promise, it zero matters. The pieces of the plot, especially the goofier ones, are just there to set up a series of lenses by which we can examine things that inherently make us as a society extremely uncomfortable. Intimacy, death, sex, regret...all of the sad parts of being a self aware being are perfectly captured, and paint a story as gross as it is touching and relatable. 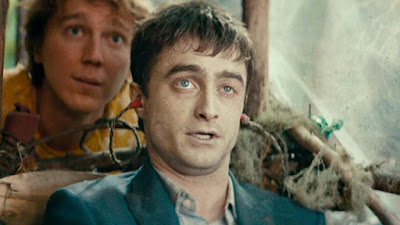 As Hank and Manny get closer in their (sort of romantic) friendship, they both become more and more alive—literally in the case of the latter and metaphorically in the former. Manny is thirsty for information about normal human society; he asks questions like why do we feel embarrassment? Why can’t we say what’s on our minds at all times? How can two people fall in love and what does that ultimately mean? Hank (representing the normal[ish] man) struggles to find simple solutions to these anything but basic questions. While Manny’s confusion is laugh-worthy, it also begins to paint a sad picture of how people like you or I function in society. Full of fear and insecurity.

The movie reminded me a lot of Bo Burnham’s recent Netflix special, Make Happy, in that it uses pretty sad real life conventions to make over the top, surrealist flavored jokes. The two are both overly produced...but for a purpose. They use these elements of production to comment on the silliness of their existence. It’s insane that a movie about a farting corpse exists. And that’s kind of the point. Nothing really matters after all. Swiss Army Man highlights the lengths we go to achieve an arbitrary sense of success and happiness that end up being rooted in self-imposed standards that end up making us miserable. The genius of the film is that it is very aware of its construction. Not only do the characters create scenes of real life and pop culture to bring Manny up to speed—the two are also the main composers of the score. Instead of music that invisibly drives the plot, Hank and Manny are the ones singing the musical numbers before the score picks them up, even going so far as to match the characters inner thoughts lyrically. They create scenes together that replicate real life, in a story within a movie created to teach a dead man about real life. It’s fucking bananas. 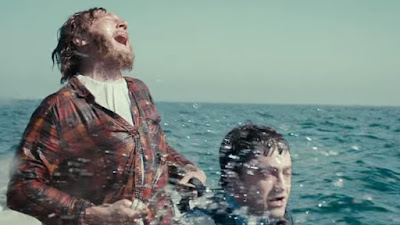 I appreciate so much the lengths this film went to relate to the contemporary person. Instead of demonizing social media or talking about—dare I say it—millennials, it uses those elements of modern life as micro details that emphasize the general malaise of today. And any other point in time. It could have just as easily been about two guys getting to know one another and surviving some sort of peril together...like literally every single movie made ever… but instead it layers all of these comedic and surreal elements to create a bit of cinema that is so real, so relatable, and so touching, it really takes you by surprise.

As I walked into the theater with my friend, I didn’t expect to get my heart strings plucked like a lute at a first rate renaissance faire...I planned on maybe blowing an afternoon on some weirdo summer indie flick with little to no return of investment. But it ended up blowing my mind instead. Never once did I check my watch hoping the story was close to an end—even when the story took its inevitable sad turn. It was surprising, smart, and funny. I laughed. I cried a little. I cannot recommend this movie enough...as weird as the packaging is, trust it. For everyone craving an original hit this summer, Swiss Army Man is it.
Posted by Patrick Bromley at 5:00 AM