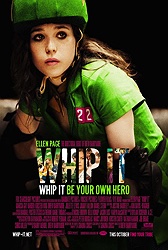 “Put some skates on. Be your own hero.”

Whip It, directed by Drew Barrymore and based on the novel Derby Girl by Shauna Cross, is a celebration of platonic lady love and a giant middle finger to the male-dominated world of professional sports. But more than that, it’s about finding our own paths without burning the bridges that connect us to others. It’s about replacing expectations set upon us with goals we set for ourselves. Plus, you know, it’s about cute girls tackling each other in fishnets and skirts.

Ellen Page plays Bliss Cavender, Alt-Girl Misfit. Bliss has spent years humoring her mother (Marcia Gay Harden) by posing gracefully in teen beauty pageants, but deep down, she’s aching to rebel. The small town of Bodeen, Texas, however, isn’t exactly ripe with opportunity. Bliss and her best friend Pash (Alia Shawkat) are helpless against an endless cycle of football and barbecue, a suburban hellscape that serves only to help old men come to terms with their own obsolescence. Luckily, she manages to convince her mother to take her shopping in the hipster haven of Austin, where she’s introduced to knee-high boots, head shops, and the wild world of women’s roller derby. Encouraged by veteran Maggie Mayhem (Kristen Wiig), Bliss tries out, makes the team, and starts on a bloody warpath toward glory as Babe Ruthless.

Fresh off her turn as a whip-smart Diablo Cody snarktrooper in Juno, Ellen Page presents Bliss as nuanced, vulnerable, and full of love. Bliss’ scene-to-scene motivations aren’t always clear, but Page plays her with a kind of consistent interiority; we can always see the wheels turning in her close-ups. Marcia Gay Harden plays Repressed Mom Brooke Cavender like a coiled spring that never unfurls. It’s a really sad and interesting performance that doesn’t go too far or turn her into an irredeemable monster. Kristen Wiig’s Maggie Mayhem is warm and smart, if a bit underwritten. Daniel Stern does his cooky, wild-eyed thing when it’s needed, but his Earl Cavender also has a quiet dignity to him in the heavier moments. They’re all exactly the right performances for the roles.

But we were talking about skates and skirts! For most of its running time, Whip It follows a classical sports movie structure: The Hurl Scouts are a rag-tag bunch of derby chicks who sit dead last in the standings year after year. But they’ve got spunk; they’ve got heart. Joining Bliss and Maggie are Smashley Simpson (Barrymore), Rosa Sparks (Eve), The Manson Sisters (Kristen Adolfi and Rachel Piplica), and Bloody Holly (Patrick’s Girlfriend Zoë Bell). Their main rivals are the undefeated Holy Rollers, led by the vicious Iron Maven (Juliette Lewis). The Scouts expect another dismal season until Bliss dazzles them with her speed and intensity. That, combined with a new playbook from their coach Razor (Third Wilson Brother Andrew), inspires the team to kick ass and take names all the way to the championship.

Well, sort of. The great thing about Whip It is that the girls couldn’t give a hot damn whether or not they win anything. In a world of points and rankings, where the beauty queens’ dresses have to be just right and the idiot jocks try to eat The Squealer in less than three minutes, these girls are more than happy to come in second if it means they’re doing it together. They routinely choose joy and violence over scoring and strategy. They celebrate each other’s most badass moments even after a crushing loss. Their entire sport is about creating bonds between those who don’t fit in anywhere else. While the Normals shame each other with their bank accounts and fill the empty spots in their souls with trophies, these girls understand that the heart of team competition is unity, and that the best path to personal fulfillment is to Be Your Own Hero.

Along those same lines, one of the film’s other major strengths is the way it juxtaposes external goals forced upon its characters with the internal ones they cultivate for themselves. Bliss’ mother, a former beauty queen delivering mail to nobodies in a nowhere town, obsesses over her daughters’ futures because she never had one of her own. Her father, a football fan stuck with two daughters, watches jealously as the neighborhood boys grow and play without him. He drinks away night after night in front of the TV, resigned to the path of least resistance. Bliss, like her parents, is feeling guilty about wanting something she’s not supposed to want. It’s only after she finds her own sense of agency and self-worth through roller derby that she’s able to admit to her parents that she can’t live their lives anymore. Thankfully, they’re all better for it.

There are lots of bits that don’t work, of course. The middle twenty minutes spins its wheels while Bliss gets wrapped up in a love subplot with Oliver (Landon Pigg) that contributes nothing real to her character and leads us to no new revelations (the swimming pool scene is truly tone-deaf and awful). A good subplot should create narrative parallels with the main plot and give the characters fewer opportunities to avoid conflict. Bliss already had a ton of room to grow in her relationships with Pash, Maven, and her parents, leaving the Oliver stuff a bit hollow. It’s oddly paced, too. With two or three exceptions, their scenes together could be presented in any order and there’d be no noticeable difference. She tells him off with a speech that sounds badass on the surface (she insists she’ll never be “that girl” who listens to some asshole apologize), but we’ve never been led to believe she would have ever been “that girl” in the first place. It’s narrative time that would have been better spent in other places.

Whip It isn’t perfect, but we need a lot more films like it. It’s fun and sweet and the characters all act like intelligent human beings. They do and say things that are honest and logical. No one’s ever asked to carry the idiot ball for the sake of plot convenience. It’s girl-positive and sex-positive and one of the few films that knows exactly what to do with Drew Barrymore (I’m not even close to knowing how to approach the irony there). It’s a coming-of-age story about making choices that doesn’t condescend to young people. It won’t necessarily give you a good sense of how roller derby works, but hopefully it’ll show you how little that really matters. Not everything is about rules or points. We’re not defined by what college we get into or how much we spend on our clothes. Do your own thing. Be your own hero.