Like colorful relatives who live on the shady side of town, it is a joy to visit Martin Scorsese's gangster opus Goodfellas again and again. 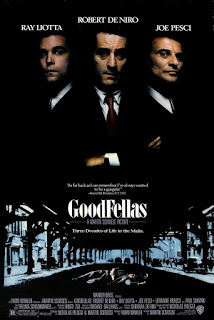 “As far back as I can remember, I always wanted to be a gangster." So begins Henry Hill’s tale of his life in the mob. Better than any other gangster picture, Goodfellas captures the joy inherent in lawlessness. Director/co-writer Martin Scorsese has always given his audiences credit for being able to ferret out the irony in his approach; indeed, Scorsese’s crime films often face the charge of glorifying violence and bloodshed. Nothing could be further from the truth. The violence in Goodfellas is sickening, brutal, and realistic. Scorsese assumes a moral center where these actions are inherently wrong, but wishes to answer the deeper question of why any man would choose to live this life.

The Plot in Brief: Henry Hill (Ray Liotta) recounts his decades-long association with the mob, specifically a criminal “crew” comprised of Jimmy Conway (Robert De Niro) and Tommy DeVito (Joe Pesci). Conway masterminds a five million dollar cash Lufthansa Airlines heist at JFK airport (a true-life event that, at the time, was the largest single robbery in American history. Although many of the incidents and names have been changed, Goodfellas is based on the real Henry Hill’s crime career.) As time goes on and the crew’s crimes become more brazen, Henry’s life begins to unravel. 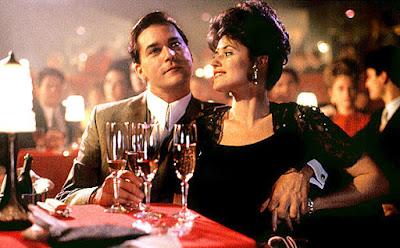 Joy is the key to understanding Henry and his decisions. Two useful tools that I use to interpret gangster movies are Robin Wood’s essential essay “The Lure of Irresponsibility” (sadly, not available online but included a chapter in Wood’s book Howard Hawks) and Robert B. Ray’s indispensable book A Certain Tendency of the Hollywood Cinema. Both authors could have been writing specifically about Scorsese’s gangster opus.

Wood suggests that none of us attend movies for a moral lesson, so the primary appeal of crime films is their depiction of fantasy lawlessness. Looking at the fate of every major character in Goodfellas, it would be hard to build a case for Scorsese’s protagonists as role models. They make choices and measure their successes according to the rules of their society, just as we do, but their “rules” explode the boundaries that constrain the average moviegoer—and (spoilers for Goodfellas) so do the consequences. 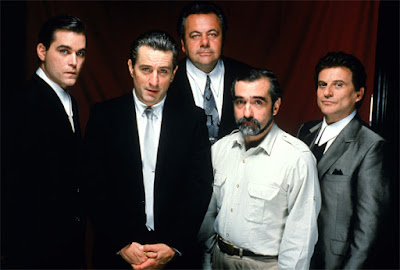 Ray maps out a detailed theory about postwar films appealing to two different audiences, which he names “naïve” and “informed.” Ray suggests the successful motion pictures in the modern age find a way to appeal to both audiences. The “naïve” audience, according to Ray, will watch a film like Goodfellas and revel in the violence and power fantasy. The “informed” audience, on the other hand, will recognize the ironic signifiers built into the work (Tommy’s mock concern for a non-existent deer he lies about hitting with his car while appropriating a knife from his mother’s kitchen that he will use to stab a man to death.) Thus, the film satisfies both audiences.

Interestingly enough, the actual Lufthansa heist at the center of the film is never shown, just the intricate preparation and long, bloody aftermath. This is a canny choice for Scorsese and partially answers his critics who contend that the director delights in his characters’ lawlessness. Here Scorsese focuses on the grim, stomach-churning machinations of Jimmy Conway trying to keep his accomplices from claiming their share, keep himself out of prison, and keep as much of the money as possible. 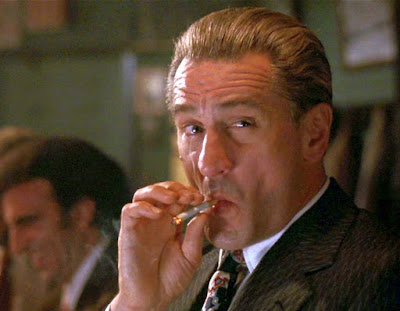 The film is rightfully famous for a number of things: Pesci’s monologue (“How am I funny?”), which I believe was a big reason he won the 1990 Best Supporting Actor Oscar; Scorsese’s endless, intricate Steadicam shot following Henry’s Byzantine route through the back of a nightclub; and Scorsese’s unmatched use of contemporary music to underscore a scene. I cannot be the only one for whom the famous piano coda at the end of Eric Clapton’s “Layla” always summons memories of Scorsese's bloody “aftermath” montage. Similarly, the “Jump Into The Fire” sequence at the end of the film uses the Harry Nilsson song to brilliantly convey Henry’s high-strung, drug-addled unraveling on his last day of freedom. “Remember to stir the sauce!”

As an Italian-American, I love how Scorsese’s gangster films often focus on food. We are treated to the sight of Sunday dinner at the home of mob boss Paulie Cicero (Paul Sorvino), which resembles every Sunday afternoon of my childhood. (Henry recounts that the mob lifestyle was insular, and members never associated with anyone else; showing them at Sunday dinner makes it clear they consider each other family.) Scorsese’s mobsters love to congregate in fancy restaurants and diners. When some of Henry’s associates are imprisoned, they use their influence to arrange for a cell with a kitchen so that they can cook; Cicero is shown slicing garlic with a razor blade so that it “liquefies as soon as it hits the hot oil” (like Clemenza’s impromptu recipe for spaghetti sauce in The Godfather, this is a cooking tip that really works.) When Tommy, Henry, and Jimmy stop at Tommy’s house for a knife, they wake Tommy’s mother (Catherine Scorsese, Martin Scorsese’s mother) who promptly lays out a full meal for the boys. In fact, one of Henry’s biggest complaints about the witness protection program is that when he orders spaghetti in his new town, he gets “egg noodles with ketchup.” 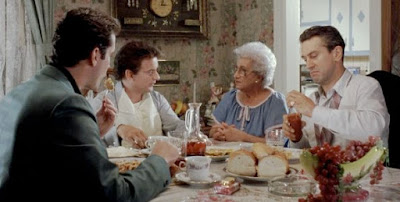 I also love the observation by Karen (Lorraine Bracco) at her wedding reception that every male there was named either “Petey” or “Paulie.” Many Italian families suffer from this “Too Few First Names” syndrome (along with the fact that every girl’s middle name is Marie.) There was a time when, upon arriving at any of my family’s larger gatherings, if any guest in attendance would have shouted, “John!” fully half of the men present would turn their heads.

BTW: If you hunt down a copy of the PBS American Masters episode about Scorsese, it includes footage taken on the set of Goodfellas, showing him directing the scene where young Henry Hill is yelled at by his superiors for offering to help the neighborhood man who has just been stabbed. Priceless.

Goodfellas’ Three Miracles: Career-best performances from Liotta, Pesci, Bracco, and Sorvino; Scorsese’s hippity-hoppity pacing, which sees the film start fast and then only accelerate; and Robert De Niro’s less-flashy, far scarier performance as Jimmy “The Gent” Conway, the smartest member of this den of thieves. 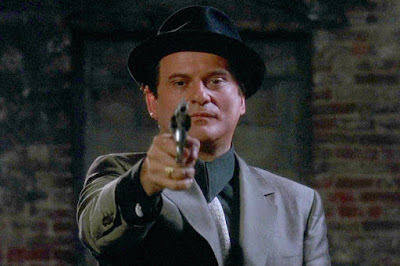