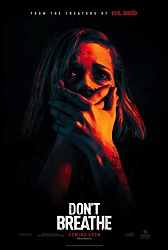 This is the real deal.

Fede Alvarez had a lot to prove when he took on the 2013 remake of Evil Dead. Not only was he the director willing to tackle Sam Raimi's original classic -- one of the sacred cows of horror -- but he also had to do it in such a way as to honor the first movie while justifying a remake that still managed to be different enough so as to give his version its own personality. At this, he was mostly successful. Though the finished product is still uneven, it's hard to argue that Alvarez didn't direct the hell out of his Evil Dead, making a movie that's stylish and beautiful and, most of all, gleefully brutal in its execution of largely practical gore gags. Like the movie or not, Fede Alvarez did his very best to deliver the goods. 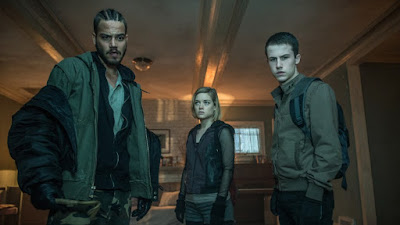 Now Alvarez is back with his second feature, Don't Breathe, and once again he delivers the goods. Based on an original script by the director and co-writer Rodo Sayagues, Don't Breathe is able to exist outside the shadow of an existing property and offers a clearer, less baggage-laden look at who Fede Alvarez is as a filmmaker. Like he had already done with Evil Dead, he proves here to be an exceptional technician and stylist -- the movie is carefully constructed in a show-offy way reminiscent of Hitchcock, De Palma and Panic Room-era (era) David Fincher, all of whose influences are deeply felt in Don't Breathe. But for a guy whose debut film was a more-or-less spiritually faithful remake of a classic horror film, Alvarez suggests with Don't Breathe that he's no longer interested in doing what is expected of him within genre frameworks. That's not to say that Evil Dead was just some carbon copy, but the movie delivered more or less what we expected when we sat down. With Don't Breathe, you don't know what to expect -- even when you think you do. This is a movie with surprises in store.

Jane Levy stars as Rocky, one-third of a team of young thieves living in Detroit who find out that the home of a blind man (Stephen Lang) is supposedly holding tens of thousands of dollars won in a court settlement. Anxious to get her little sister out of Detroit and split for Los Angeles, Rocky and her two partners enter the house for what is supposed to be a very easy job. It winds up being anything but. 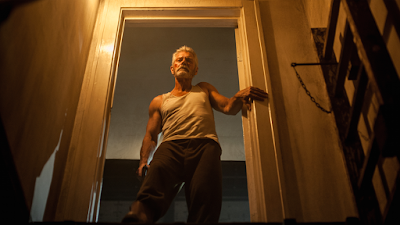 Like the indie horror film Intruders from earlier this year, Don't Breathe starts as a home invasion/crime film before morphing into something less predictably safe (one might say it is "savagely unpredictable," am I right?). New developments are introduced that throw us off balance. Characters behave in ways we don't see coming -- and, yet, because this movie is very smart, it affords the characters the same intelligence. An argument could be made that getting into this situation in the first place is the wrong choice, but once everyone is in, they're in. They do the things we would want them to do and act in the ways that we hope they will act. Watching stupid people make bad choices rarely makes for a fun moviegoing experience, so Don't Breathe offers smart people making bad choices. And then trying to make good choices (sometimes) but not being able. It helps, too, that the characters are just sympathetic enough -- they all have their reasons for behaving the way they do. Rocky desperately needs the money to get her younger sister away from an abusive, alcoholic mother. One of her partners, Alex (Dylan Minnette), is there because he's in love. Even Stephen Lang's blind man is given enough back story so as to not be a complete monster. He may still be a monster (or not), but at least he's a monster of some making.

Where the movie really shines is in its formal construction. The nature of the plot is such that it allows for several long sequences to take place without any dialogue, and these are among the best scenes in the movie. Alvarez builds insane amounts of tension out of silence and geography -- where the characters are both within the house and within the frame. One scene, designed to take place in total darkness, is presented in a way I've never seen in a movie before. It's incredible. The camera is always a weightless objective observer, traveling through doorways, windows and sometimes even floors, only ever revealing as much as any of the characters know. This is the kind of thriller that manipulates its audience brilliantly, but we're having so much fun being manipulated that all we can do is giggle. And maybe hold our breath. 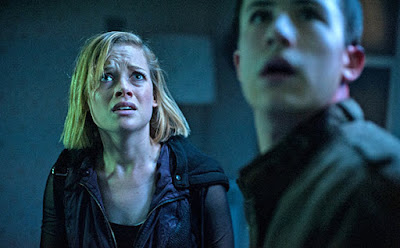 It's been a rough summer at the movies, but somehow August is saving a dire couple of months with some terrific smaller films. Don't Breathe is one of them. See it opening weekend in as crowded a theater as you can find, as this is a film that demands to be seen with a huge group of people squirming and reacting to just how tense and fun the movie can be. The Evil Dead remake had me curious to see what Fede Alvarez would do next. Don't Breathe has me genuinely excited. This movie kicks ass.
Posted by Patrick Bromley at 5:00 AM