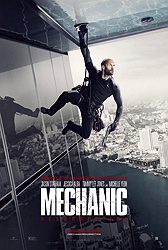 I’m not a demanding man. I’ve sat through (and enjoyed) Bad Moms, Nerve and War Dogs. I just recently wrote a retrospective on how much I love Wishmaster. I love cinematic junk food. But Mechanic: Resurrection is a chore to sit through. I beg that the movie is cynical so as to not reveal that the people behind it are just inept. I know movies are hard to make, but I honestly believe it wouldn’t have taken much effort to make a better movie than this particular finished product. After a late summer rebound, Mechanic: Resurrection is the perfect capper to a summer of movies that, at its lowest ebb, produced some truly atrocious films. 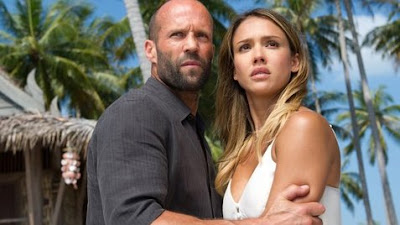 Mechanic: Resurrection catches up with Arthur Bishop (Jason Statham) trying to build a new life while in hiding. He’s thrust into action when his new love Gina (Jessica Alba) is kidnapped by an international arms dealer named Crain (Sam Hazeldine). Crain tasks Bishop with eliminating three targets in exchange for Gail unharmed. The set-up for Mechanic: Resurrection is not the problem. It’s standard. A fun, dumb action movie can be made from such a premise. And in its opening scene, it is. It’s not great art, but it works on its own terms. It opens very James-Bondy, with Bishop jumping from danger off of a lift and onto a hang glider. The annoying thing about the rest of Mechanic: Resurrection is that it’s so stultifying. Brief aside: if you ever go to the movies with me you can tell easily if I like something or not. If I sit still, I’m good. If I start fidgeting around, I’m miserable and want to leave. The people behind me during Mechanic: Resurrection must have thought I was dancing a jig.

I can barely think of a single area where the movie succeeds. The action isn’t exciting (or particularly well-choreographed), the tone is by-and-large humorless, there’s not an interesting story to tell or characters to care about. What I was left with was just staring at gorgeous photography (I’ll give the movie credit in that regard, even though there’s an overreliance on green-screen backgrounds) and the companies of some actors that have been appealing in the past but aren’t given much to work with in this script. Jason Statham bummed me out in this movie. He is a physical presence but he mostly just poses and grunts his way through Mechanic: Resurrection. Oddly, he doesn’t crack any fun one liners (something he used do in his Guy Ritchie films), which really sets the tone for the rest of the movie, which is at once ridiculous but also not self-aware enough of itself to revel in being goofy.

The film co-stars Jessica Alba, who I don’t want to rag on because she’s gotten enough of that in her career. All I’ll say is that I’m still waiting on a film to tell the story of her real-life consumer products company, which has resulted in her having a net worth of over $300 million. That would be an interesting story. Here’s she doing the thing she normally is asked to do, which is to rely heavily on her beauty and pleasantness. Mechanic: Resurrection is not all that interested in her as a character. Michelle Yeoh is barely in the movie in a thankless part where she isn’t even allowed to fight anyone. Big miss there. Tommy Lee Jones appears for about 10 minutes and doesn’t even show up until over an hour into the proceedings. His character is that of an arms dealer, who, in one hilarious sequence, is shown to have like 30% market share of arms sales in what can only be described as a graphic display that could never exist in the intelligence community. How can anyone know the market share of the arms community? Is that an under-hand business? And why are there only four arms dealers in the world? Jesus is this movie stupid. 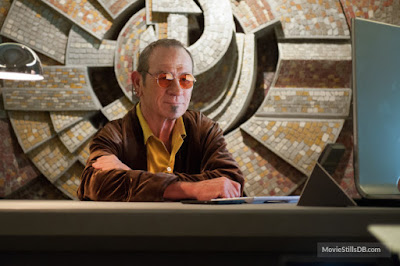 All I wanted out of Mechanic: Resurrection was a good time. A big, dumb fun Saturday night’s worth of entertainment. The film misses that mark so badly that I’m not even sure what the filmmakers were hoping to achieve. This is bad direct-to-video level of quality for an action film and one of the worst movies of the year.
Posted by Patrick Bromley at 5:00 AM