With the release of Ron Howard’s outstanding new documentary Eight Days a Week: The Touring Years, the actor-turned-director has created another hit with critics, music aficionados, and movie fans alike. It’s not necessarily in the way he tells the familiar story—every Beatles fan knows about the toll taken on the four Liverpudlians during their worldwide tours and how it drove them into the studio to craft their best work—but it’s a story that is enhanced by newly-discovered footage and some fresh interviews with people who were there, both on the stage and in the crowd. Howard uses his skills to create a narrative of hope, fame, and ultimate disillusionment, often without having to rely on any narration at all. In the weeks leading up to the debut of the new documentary (which I was very excited about because I’m a huge Beatlemaniac), I’d been doing a lot of thinking about Ron Howard as a performer, a director, and a fan.

Ron Howard started his career in showbiz as Opie on The Andy Griffith Show when he was only six years old. While my parents really enjoyed The Andy Griffith Show and it was on in my house quite a bit when I was growing up, I didn’t pay it much attention. I wasn’t interested in black and white TV shows that were made in a bygone era, and I often would either leave the room or occupy myself with some toy when the show was on. It was only as an adult in my thirties that I really approached the show with open eyes and was able to recognize it for its genius. Andy Griffith plays the town sheriff with good humor and a twinkle in his eye while Don Knotts is his bumbling deputy. What I hadn’t realized as a kid was that Don Knotts was a comedic giant who blended physical comedy with a sense of bravado that belied his small stature and that the show was both celebrating and mourning a way of life that was gone even by the time it was being made. I certainly didn’t identify with little “Ronny Howard’s” character Opie, who would have been growing up in front of millions of viewers the same way that I was growing up when those episodes aired in syndication. 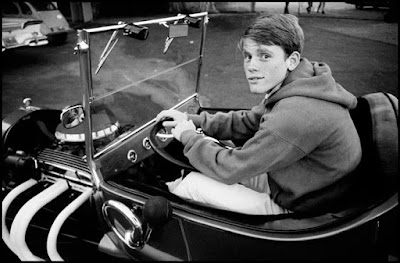 For eight years, Ron Howard co-starred on The Andy Griffith Show. He literally went from a little boy to an adolescent on a TV show set. All the while, he was constantly paying attention to how shots were being directed and framed, asking questions of the crew in between his scenes, and learning more about the business behind the scenes. On-screen he was every American kid, but off the screen he was learning the craft of filmmaking. During the year following the end of The Andy Griffith Show, he tried his own hand at directing with three shorts in his off-time before being cast in guest roles (usually your average American youth) in various TV shows. In 1973 he found himself cast as one of the ensemble leads in George Lucas’s best movie (keep in mind that this is coming from a massive Star Wars fan) American Graffiti as another all-American everyman, this time as a guy just out of high school and facing the uncertainty of his future. The movie was a huge success and was nominated for five Academy Awards, so it makes sense that Garry Marshall created Happy Days, a TV show that is basically American Graffiti: The Series. Who better to serve as your star than the guy who was actually in American Graffiti? Thus Ron Howard followed his success at the box office with a seven-year stint playing a variation of the exact same guy he’d played his whole life.

I hear you ask “Is there a point to all this?” Yes, there is. Bear with me just a bit longer. What’s important to remember is that Ron Howard continued to play the exact same kind of role for the better part of TWENTY YEARS. He was the all-American boy who was into cars, girls, and was virtuous and trustworthy. He wasn’t threatening, and both teenagers and adults admired him. He could have spent the rest of his life playing up to the image he’d created between the beginning of The Andy Griffith Show in 1960 and when he left Happy Days in 1980. There’s no reason he couldn’t have followed that up with another sitcom and another one after that, and we could still be seeing him on TV as somebody’s goofy, baby-boomer dad or milk-drinking grandpa. Or he could simply have retired quietly and lived off the royalties from two decades as a successful actor. There was no need for him to push or challenge himself because his legacy and his future were secure. Everything changed when Roger Corman came calling. 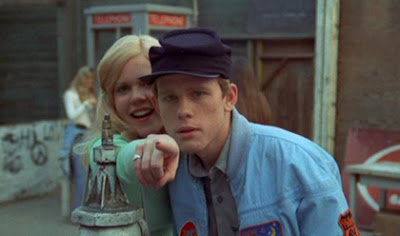 Howard agreed to star in a cheap car chase movie from Corman in 1976 called Eat My Dust (which I wrote about way back in Netflix This Movie! Vol. 44, though the movie itself has long since left Netflix) under the stipulation that Corman allow him to direct his own movie afterward. Corman agreed and Howard followed Eat My Dust with 1977’s Grand Theft Auto. Howard’s first full-length directorial effort is better than Eat My Dust, showing his directorial potential; it’s still on Netflix as of this writing. Patrick’s been championing this one for years, and with good reason. It’s a sweet movie that capitalizes on Howard’s strength while blending in the car culture of the 1970s.

This was enough to get a few TV movies greenlit with Howard as a director, and his next theatrical movie was Night Shift, which I’m quite fond of. Leaning on his buddy and co-star of Happy Days Henry Winkler and casting a young Michael Keaton in his first major movie role, the man who was once Opie made a quirky little movie about a whore house in a mortuary. What’s more, it’s really, really funny. What followed was a whole string of minor classics that include Splash with Tom Hanks and Gung Ho with Michael Keaton again. In 1988 he directed the grossly-underappreciated fantasy film Willow for George Lucas, and by the nineties was winning Oscars and making movies that everyone seems to admire for their quality.

This is what I admire most about Ron Howard. He spent twenty years in the Hollywood machine as an actor, making connections, building associations, and earning people’s trust. He could have coasted on his reputation and rested on his laurels, but he was driven enough to pursue a dream he’d had since he was a little boy. Not content to simply be before the camera, he wanted to be behind it, creating the story that other actors help to tell. In accomplishing this, he walked away from the sure thing and opted instead to leap without a net and see how far he could go. Look, this is not some Ron Howard apologist’s love-fest. To be completely honest with you, I consider myself a fan of less than 50% of the films he directed. But that’s beside the point, because it’s not about the work; it’s about the chance taken, success achieved, and sheer chutzpah. No one can argue that he’s clearly a director at the absolute pinnacle of his career. Had he chosen not to take a few risks back in the 1970s and continued on as Richie Cunningham forever, we wouldn’t have this new documentary about The Beatles, which I absolutely love. 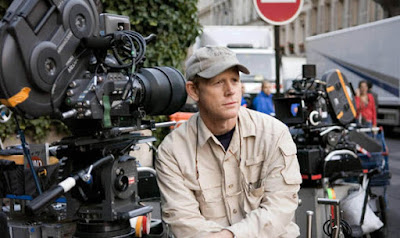 This is the lesson Ron Howard has taught me. Frankly, I tend to forget it more than I remember it, but the message is still there when I’m ready to follow. It reminds me to be bold and fearless. To take chances with my life and not to be satisfied with what I’ve have accomplished in the past. To always move forward and challenge myself, because only I know what I am capable of. Few people would have predicted that the red-headed kid from TV would one day become one of Hollywood’s most prestigious directors, but HE knew, and he turned his back on a successful thing to pursue his dream until he made it a reality. Good on ya, Opie.
Posted by Patrick Bromley at 12:00 PM