Off the Chain: Overcoming the Black Snake Moan 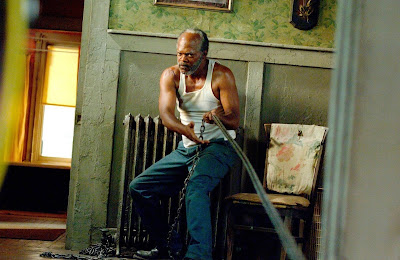 “God seen fit to put you in my path, and I aim to cure you of your wickedness.”

Addiction and recovery are fertile grounds for good storytelling. They create strong interpersonal tension and layers of conflict that we can immediately relate to. We love seeing people get better because we want to believe that the same thing can happen for us. Life is hard, and the struggle is real. Movies are for everyone, though, and many tend to take safe and reductive approaches to rehabilitation. They skip the ugly stuff and present the kind of moral dichotomy you see in Barbie dolls: the addict will do the right thing because it’s right, and the sooner they realize it, the sooner America will be great again. Luckily, we get the odd filmmaker willing to approach difficult subjects sympathetically. They play with weakness and vulnerability without taking away agency and consequence. Craig Brewer’s 2006 film Black Snake Moan feels like a grindhouse trash-fest at first, a stylistic exercise that tries too hard for its own good. But digging deeper into the symbolism at work allows us to approach the film’s emotional extremes with some much-needed brutal honesty. In this case, that approach involves chaining a gorgeous blonde to the living room furniture.

No one in Tennessee plays the blues like Lazarus Redd (Samuel L. Jackson). No one sang, drank, or lived as hard as he did at his peak. He gave all that up for love, but twenty years and one cheating wife later, he’s wishing he hadn’t. His beloved Rose (Adriane Lenox) just took off with his brother Deke (Leonard L. Thomas) and left him with nothing but his guitar and a bad hangover. Meanwhile, bruised beauty and sex addict Rae Doole (Christina Ricci) is also resorting to inappropriate coping strategies. It’s only a few minutes after her boyfriend Ronnie (Justin Timberlake) leaves town that she starts feeling that anxious, gnawing urge to live up to her considerable reputation. The next morning, Lazarus finds her pantsless and unconscious in the mud outside his house and begins cleaning her cuts and patching her bruises. Once he matches name to face, however, he resolves to cure what’s really ailing her. He sees a kindred spirit, someone fighting the same demons that have haunted him for years. He sees the same love that stoked the fire within him and the same pain that smothered it to death. This is more than A Girl in Trouble. This is both of their souls on the line. 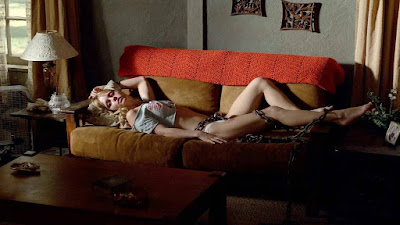 From here on, things get biblical. Lazarus knows that a cold bath and a few prayers aren’t going to be enough to break Rae free of her sickness, so he wraps a heavy chain around the radiator and locks the other end around the girl’s waist. It’s a stirring image that we might read as an attempt to enslave Rae, to keep her by his side in a way he failed to do with his wife. Instead, consider Rae to be a manifestation of the helpless and angry rage that Lazarus has been feeling since Rose left. She’s pure lust and insecurity, closed-off and unable to cope with her past abuses. It’s telling that Rae wears a shirt featuring the Union and Confederate flags facing off alongside some pistols. Her entire character is emblematic of conflict and inner turmoil, and Lazarus has finally reached the point in his life where he has to face it. “I’m gonna suffer you,” he tells Rae, and the chain is there to make sure of it. She pushes and screams until she runs out of energy, but with nowhere to go and no willing partners to help numb the pain, all that’s left to do is to take a long look at what she’s become. Lazarus mends her, feeds her, and clothes her as a father would. That chain stays fastened, though, lest she lose herself again.

But soon, Rae makes the chain her own. There’s a beautiful moment early on where she fights off nightmares and flashbacks of her childhood abuse by wrapping it tightly around her body. Rae needs security; she needs to be tethered to something real and present so that she doesn’t slide backward. It’s not long before she starts taking a bizarre kind of solace in the chain, a willful probation from real life that gives her the space to process her anxiety. She realizes that, in a way, Lazarus has given her a gift: no one will take her away, and she won’t ever be lost or alone. It gives her a safe space free of temptation (barring a minor backslide with young Neimus K. Williams as Lincoln). It gives her the opportunity to discuss love and faith with Lazarus’ preacher friend R.L. (John Cothran, Jr.) without feeling judged by the churchgoing faithful in town. It even gives her the chance to help make dinner for a group of new friends. This isn’t domestication, mind you. This is inclusion. This is safety and familiarity. The only reason R.L. isn’t flipping the dinner table and calling the cops is because he sees how much she needs all this. This is an addict going cold turkey, a smoker fighting nicotine fits. 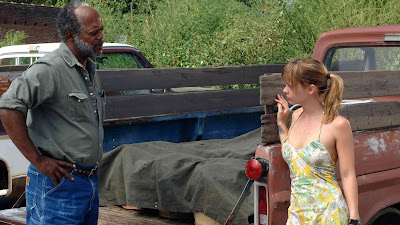 The chain comes off eventually, of course. Lazarus realizes that he can’t force someone to change all on his own. He and Rae toast to freedom and he sets her loose. But she’s with him, now. She understands why they need each other. This sense of compassion and kinship is what makes the “Black Snake Moan” scene so powerful: notice that while Lazarus tells the story of his lost loves, Rae suffers through yet another flashback to the night of her abuse. But this time, the music guides her. She makes it through without having to lose herself in a stranger. Instead, she and Lazarus cling to each other and build a chain of their own. It’s a brilliant moment, a kind of death and rebirth for both of them. Now that they’ve faced their demons over a dark night of the soul (punctuated nicely by a thunderstorm), they’re ready to cycle back into the real world. Rae confronts her mother (Kim Richards) about her abuse, and Lazarus strikes up a romance with the lovely Ms. Angela (S. Epatha Merkerson). Then they hit the bar, where Lazarus brings the blues and Rae parties with clarity and confidence. 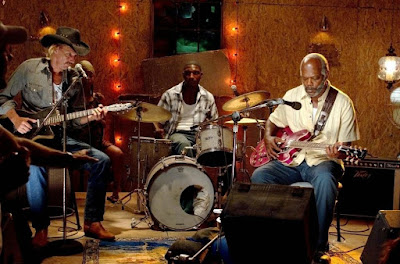 We might have predicted that Lazarus would rise from the dead or that Rae would provide some light in his life, but what’s really compelling about Black Snake Moan is the way it uses transgressive imagery to tell the story of broken people finding their souls again. An old black man chaining up a half-naked young white girl and refusing to let her go is challenging subject matter, to be sure. But demonizing a film for taking these kinds of chances denies it the opportunity to pay them off. The chain is a powerful piece of symbolic storytelling that leads us to Black Snake Moan’s closing moments, when Ronnie drapes a small gold one around Rae’s waist during their wedding ceremony. It’s something real, something present and safe. She’ll never, ever, be able to forget what happened to her as a child, but she can reach for the symbol of her recovery. She can remember the time she spent with a man who shared her pain and laid it bare to heal them both.