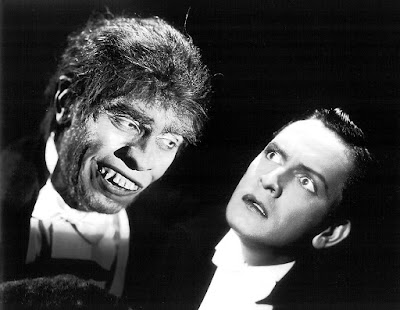 The very first horror performance ever awarded an acting Oscar is still one of my favorites.

I owe much of my love of horror to 1931's Dr. Jekyll and Mr. Hyde -- and, more specifically, to Fredric March's performance as both title characters. Before I was old enough to have access to many of the movies I would one day love, I was going to the public library and checking out books about classic monster movies. The Crestwood House series were staples and in constant rotation, but the one I would read and re-read more than any other was called Movie Monsters by Thomas G. Ayelsworth. This was where I first fell in love with Lugosi's Dracula and Karloff's monster, where I learned the difference between the Lon Chaney Wolf Man and Henry Hull in Werewolf of London. In many cases it would be years before I would ever see these movies, but I had that titles and stars of all of them memorized by the time I was eight years old. It is this book, more than anything else, that set me down the path of a lifelong love of horror.

The monster to which I was drawn more than any other was Fredric March's Mr. Hyde, shown in a side by side photograph very much like the one featured above (I'm actually 75% sure it's the same picture). There was something about the totality of the transformation visible in just one image that struck me, not just on a "movie magic" level but also thought that the same man was able to inhabit both of the bodies shown. How could that handsome, totally normal-looking gentleman also be such a beast? And would his performance as Hyde be as primal and animalistic as the incredible makeup by Wally Westmore and Norbert Myles suggests? The makeup, incidentally, gets more ape-like and monstrous the more times Jekyll transforms into Hyde, a physical manifestation of the increasing ugliness of Hyde's acts. Because this movie is really great and really, really dark. 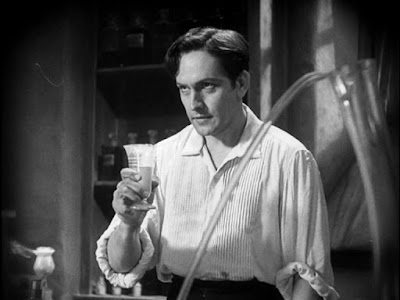 While his work as Dr. Henry Jekyll is perfectly excellent -- he's dashing and intelligent and genuinely means well in his attempts to divide the "good" half of man from his selfish, evil nature -- it's what he does as Hyde that makes Fredric March's performance in the movie one of the best in all of horror. Though not yet the celebrated star he would eventually become, March was already an Oscar-nominated leading man when he made Jekyll and Hyde in 1931. His contemporaries in the genre at that time, be it Bela Lugosi in Tod Browning's Dracula or Boris Karloff in Frankenstein, were more or less playing character parts and made their names in horror. March was a movie star who happened to make a horror film and then gave one of the genre's all-time great performances -- a fact which, for one of only a handful of times in their nearly 90-year history, actually managed to go noticed by the Academy. Of course, even then he had to share his Best Actor win with Wallace Beery for The Champ, but, hey, a win for horror is a win for horror.

There is no attempt to make Hyde redeemable in any way; no glimpse into some sympathetic corner of his personality through which Jekyll manages to peek out. Hyde is pure ugly evil, torturing a prostitute named Ivy (Miriam Hopkins, playing the movies real broken heart) both mentally and physically. Unlike many of his fellow movie monsters of the day, the majority of which were cursed in some way by virtue of their very existence, March portrays Hyde as a monster who loves to be evil -- he's free at last and refuses to go back to being the civil, repressed Jekyll. He is unrecognizable in the role, burying so many of the things that made a leading man in the first place and turning them against us. I love just how dark and nasty March is willing to go with his Mr. Hyde, met every step of the way by director Rouben Mamoulian's choice to let the movie be dark and nasty too. 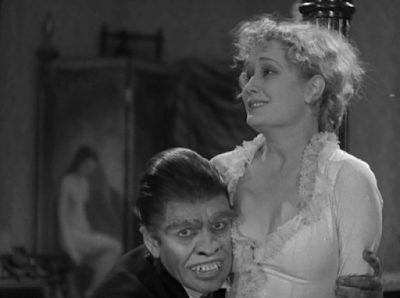 Unfortunately, despite my fixation on the movie it would be years before I was actually able to see the 1931 Jekyll and Hyde. Rights issues kept the movie locked away for many years when Paramount decided they wanted people only to be able to see the Spencer Tracy version made in 1941, so it wasn't until a visit to Tower Records in high school that I was able to find a copy of the movie in the laserdisc cutout bin. In many ways, I'm glad that it took me so long to finally see it. The movie acted as my White Whale for many years, burned into my brain but impossible to acquire, and there's no way I could have appreciated all that makes it a masterpiece at 8 or 9 years old. Plus, I probably would have only been able to locate a cut version with much of the pre-Code content removed for those delicate post-Code sensibilities. Thankfully, the laserdisc (and subsequent DVD) restored the movie to its original form and returned Fredric March's performance back to its full glory.

I have seen most of the cinematic adaptations of Dr. Jekyll and Mr. Hyde despite the fact that I'm not particularly interested in the story its central themes. None can come close to touching Fredric March in the '31 adaptation (John Barrymore, who producers originally wanted to reprise his role from the 1920 silent version, is probably comes closest). Never since has Hyde been such a monster, never since the true tragedy of both Dr. Henry Jekyll and Ivy so deeply felt. March would never again make another full-blooded horror movie, but he didn't need to. Mr. Hyde was his mic drop.