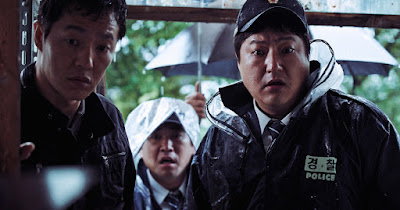 If a man was walking at me with an axe hanging out of his face, you'd better believe I'd be curled up in a ball on the ground screaming like a little bitch. Relatable frickin' characters, that's what this is all about.

I changed my mind about who to write about for this piece at least a dozen times (Sorry, Patrick). Writing about a classic and recognizable performance has been done by the more expert and clever minds of the world and I would most likely do it no justice. This is my opportunity to write about who I think is great. Just me and my simple opinions. My favourite performance (I couldn't choose just one) is of a flawed and somewhat un-lovable (yet contradictorily lovable), uncompromisingly real father.

Kwak Do-won is best known for his supporting actor work, but it was his role as Jong-Goo in The Wailing that I feel should be the one he is most recognized for from now on. I read so many reviews about this film and they mostly tended to fall on the side of his characters' dumbness and repeated mistakes throughout his investigation in the story, missing what is at the heart: a beautifully desperate performance. 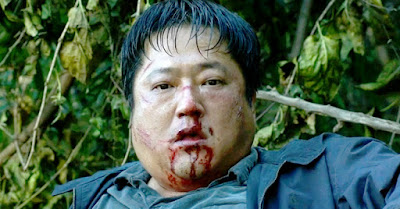 Jong-Goo is a police officer in a small Korean village. They clearly do not see much, if any, crime and when a shocking series of murders occur, what is the proper protocol when you are incredibly out of your depth? Throw in the fact that his daughter becomes a victim to this unknown "virus" and the main suspect is a creepy foreigner that you cannot properly communicate with, and how could you be anything but a scared and angry father in that moment? There are a couple notable scenes that I found myself both laughing and tearing up during as they were just so raw and powerful. The first scene has Jong-Goo out on a manhunt for the man he believes to be responsible for the murders, the man they refer to as "The Jap" (a travelling Japanese man), and the altercation between them at his cabin is spectacular. He's frustrated at the Japanese man's silent demeanour and lack of response to any of his questions, requests and, finally, demands. He doesn't want to look like he won't follow through with a threat in an attempt to scare an answer out of him. And as a father whose daughter is suffering something beyond his control, he's clearly on the verge of hysterics in his fear for her. He begins smashing the interior of the man's hut and when the dog pulls lose and runs to attack him, he beats the dog to death to save his own life. He is crying, hysterical, reached his edge and jumped over it, and is left a partial shell of a man who is no further ahead afterwards. Literally back to square one.

It's one thing to watch an actor play a part and be able to lose yourself in the visuals, but it's entirely another to be torn between reading the subtitles and watching the actors in their roles. Language is obviously a barrier, but I believe the percentage is something like 10% of what we actually communicate is verbal. The rest is inflection, movement, body language and expression. I found myself just watching him from time to time, not even reading the words, but feeling the emotion pouring from him scene after scene and he managed to transmit every ounce of pain and terror he was feeling straight into my feelers. That's some scary shit.

After a failed "exorcism" by a local shaman (via the route of some incredibly intense drums, chanting and what seemed like 1000 chicken sacrifices), his daughter's condition worsens and he again goes on the hunt for the Japanese man. This time a recently deceased man, who has been brought back to life through possession, is waiting for Jong-Goo and his friends. Kwak Do-won's reaction to this man is sheer terror, becoming almost comically so, then terrified again. This is what drew me to his performance in the first place. He doesn't run at the thing after they see it means them harm; he screams bloody murder and falls down. He's real. He's me during the future zombie apocalypse while being attacked. I like to think I'd be all brave, but who the hell am I kidding? I would be cowering in a ball and screaming for my life. 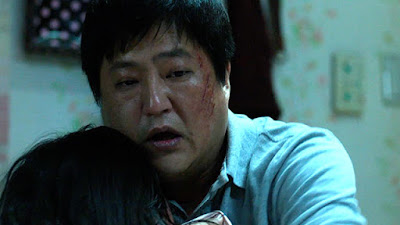 This film is a strong contender for first place in my top ten of 2016, primarily due to his performance. It's been awhile since I watched it, and Kwak Do-won's portrayal of a desperate father has literally not left my thoughts.

So watch it. If you love it even a fraction of what I did, you are in for a treat.
Posted by Patrick Bromley at 5:00 PM